This study discusses the dynamics between the philosophy and practice in the Lakulisha-Pashupata order. According to the cave temples of Elephanta and Jogesvari (Jogeshwari), Lakulisa was the 28th incarnation of Shiva, and Pashupata Shaivism his doctrine, of which the Pasupatasutra represents the prominent text detailing various ritual practices (v...

[Full title: The Nexus between Pasupata ascetics and Royalty: Traces of Lakulisa-Pasupata order in North India]

Tunjina Ranaditya is known to have established a Matha for Pasupata Saiva ascetics while his wife AmritaPrabha and his son established temples dedicated to Siva. King Jalauka built various Siva temples. His religious preceptor is said to have been the Saiva Siddha Avadhuta, who Kalhana records vanquished various followers of Buddha. His queen Isanadevi as Kalhana records got a Matrkacakra constructed. As can be seen from these examples it is evident that Pasupatas enjoyed a position of authority in early religious life of Kashmir and it is only after the coming of Samkaracarya and later formulation of Trika philosophy that such raw forms of religion were relegated to background.

Regarding such early initiation and funerary ritual which Sanderson[2] wanted to study in Kashmir he writes:

“When I began work in Kashmir, I was told that this tradition had now died out and that no Saiva initiation or funeral rites had been performed for about fifty years. What had survived was the purely Gnostic Trika of Saivas whose ritual life was confined to the Smarta level”

That the order was known in northernmost part of the country can be seen from the representation of Lakulisa on temples of Payar, Pandrethan and Manasbal The Siva temple at Payar depicts our major forms of Siva in four trefoiled niches above the doorways. The niche on the eastern front gate depicts Lakulisa with his four disciples, the southern niche Bhairava, the northern niche Siva-Trimurti and the western or back niche represents six armed Nataraja. 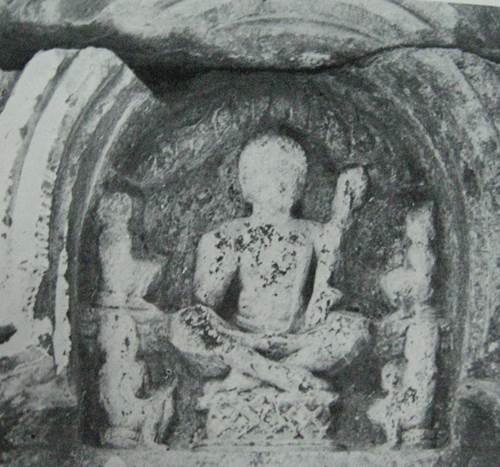 Though Lakulisa images are also known from two other temples of Kashmir located at Pandrethan and Manasbal lake but Payar temple distinguishes itself by having Lakulisa image on the lalatabimb of the main doorway indicating without doubt that it is a Lakulisa temple. Unfortunately because of major iconoclastic activity in Kashmir hardly any temples survive from earlier periods but the fact that Abhinavagupta mentions Lakulisa’s system of thought second only to his, talks about the importance of the system in Kashmir around 11th CE. The mention of Srikantha strengthens the contention that the Pasupata system was quite popular in the valley from early times. Kulacaryas of Kashmir who resorted to various occult and mystic practices seem to have had close connection with Lakulisa, but somewhere they assumed a back seat in Kashmir Saivite thought and were relegated to niches. Most probably these were the Kashmiri-Pandit scholars who migrated to South India and have been mentioned profusely in Kalamukha inscriptions.

Sanderson Alexis, “The History of Hinduism in Kashmir” Lecture at University of Hamburg April 2010, Lecture Handouts