Brahmadeva means something in Buddhism, Pali, Hinduism, Sanskrit, Marathi. If you want to know the exact meaning, history, etymology or English translation of this term then check out the descriptions on this page. Add your comment or reference to a book if you want to contribute to this summary article. 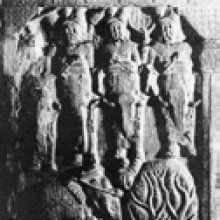 Brahmadeva (ब्रह्मदेव).—A warrior who fought on the side of the Pāṇḍavas against the Kauravas in the battle of Mahābhārata. His duty was to protect the army in the rear. (Mahābhārata Udyoga Parva, Chapter 196, Stanza 25).

When the Buddha speaks here of the ‘Brahmā heavens’, he means not only the four dhyānas [of rūpadhātu, inhabited by the Brahmadevas] but also the four ārūpyasamāpattis [formless absorptions of ārūpyadhātu, inhabited by the formless deities]. Investigation (vitarka) and analysis (vicāra), [which are eliminated in the dhyānas of ārūpyadhātu], are so difficult to destroy that the Buddha does not speak here about the levels higher than these dhyānas [namely, the four ārūpyasamāpattis].

Brahmadeva (ब्रह्मदेव) refers to one of the descendants of king Sippi: an ancient king from the Solar dynasty (sūryavaṃśa) and a descendant of Mahāsaṃmata, according to the Mahābuddhavaṃsa or Maha Buddhavamsa (the great chronicle of Buddhas) Anudīpanī chapter 1, compiled by Ven. Mingun Sayadaw. Sippi’s son founded Indapattha-nagara and reigned. He and his descendants in that city were twenty-two. The last of these one hundred and seventeen kings was named Brahmadeva. His son also reigned in Ekacakkhu. He and his descendants in that city were fifteen. The last of these fifteen kings was named Baladatta.

[«previous (B) next»] — Brahmadeva in Marathi glossary
Source: DDSA: The Molesworth Marathi and English Dictionary

brahmadēva (ब्रह्मदेव).—m (S) Brahma, the first of the Hindu triad, or the form of the Deity as Fashioner of the universe. 2 A village-god set up by the sōnāra, sutāra, jinagara &c. of a village, and having a Brahman (not a gurava or ghāḍī or rāūḷa) for his priest.

Search found 30 books and stories containing Brahmadeva, Brahmadēva, Brahma-deva, Brahmā-deva; (plurals include: Brahmadevas, Brahmadēvas, devas). You can also click to the full overview containing English textual excerpts. Below are direct links for the most relevant articles:

Chapter 11 - Churning for the Nectar: Birth of the Poison Kālakūṭa < [Section 9 - Vāsudeva-māhātmya]

Chapter 6 - Curse to Brahmā and Others < [Section 1 - Kedāra-khaṇḍa]