Brahmadanda means something in Buddhism, Pali, Hinduism, Sanskrit, Marathi. If you want to know the exact meaning, history, etymology or English translation of this term then check out the descriptions on this page. Add your comment or reference to a book if you want to contribute to this summary article. 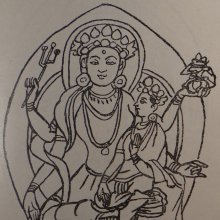 Brahmadaṇḍa (ब्रह्मदण्ड).—The rod of punishment of the creator;1 the punishment to the Sagaras; they live in hell.2

Brahmadaṇḍa (ब्रह्मदण्ड) refers to a weapon (Brahmā’s rod of punishment). It is a Sanskrit word defined in the Dhanurveda-saṃhitā, which contains a list of no less than 117 weapons. The Dhanurveda-saṃhitā is said to have been composed by the sage Vasiṣṭha, who in turn transmitted it trough a tradition of sages, which can eventually be traced to Śiva and Brahmā.

“Brahmadaṇḍa is one-faced and four-armed, sits in the Lalita attitude on a lotus, and is accompanied by his Śakti who sits on his lap. His two right hands show the Tridaṇḍi and the Varada pose, while the two left show the Ratnakalaśa (vessel containing jewels) and a mudrā with the index and little fingers pointing outwards. The Śakti displays the Varada pose in the right hand and the Abhaya in the left”.

The names of the 108 deities [viz., Brahmadaṇḍa] possbily originate from a Tantra included in the Kagyur which is named “the 108 names of Avalokiteshvara”, however it is not yet certain that this is the source for the Nepali descriptions.

brahmadaṇḍa : (m.) a (kind of) punishment by stopping all conversation and communication with one.

Note: brahmadaṇḍa is a Pali compound consisting of the words brahma and daṇḍa.

[«previous (B) next»] — Brahmadanda in Marathi glossary
Source: DDSA: The Molesworth Marathi and English Dictionary

brahmadaṇḍa (ब्रह्मदंड).—m (S) Money exacted by Brahmans from pilgrims, performers of shraddh, offenders desiring to undergo penance, outcasts on their restoration &c. 2 A curse of a Brahman.

[«previous (B) next»] — Brahmadanda in Sanskrit glossary
Source: DDSA: The practical Sanskrit-English dictionary

2) a tribute paid to a Brāhmaṇa.

(-ṇḍaḥ) 1. A plant. see brahmayaṣṭi. 2. A curse, an anathema. 3. The tribute paid to a Brahmana in the shape of a fine. E. brahma a Brahman and daṇḍa a stick.

Chapter 2b - The first Buddhist Council