Uraga means something in Buddhism, Pali, Hinduism, Sanskrit, Jainism, Prakrit, Marathi. If you want to know the exact meaning, history, etymology or English translation of this term then check out the descriptions on this page. Add your comment or reference to a book if you want to contribute to this summary article. 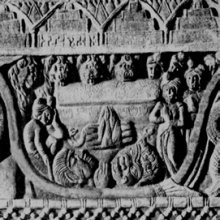 Uraga (उरग) refers to “snakes” and represents a type of Ādhibhautika pain, according to the Viṣṇu-purāṇa 6.5.1-6. Accordingly, “the wise man having investigated the three kinds of worldly pain, or mental and bodily affliction and the like, and having acquired true wisdom, and detachment from human objects, obtains final dissolution.”

Ādhibhautika and its subdivisions (e.g., uragas) represents one of the three types of worldly pain (the other two being ādhyātmika and ādhidaivika) and correspond to three kinds of affliction described in the Sāṃkhyakārikā.

The Viṣṇupurāṇa is one of the eighteen Mahāpurāṇas which, according to tradition was composed of over 23,000 metrical verses dating from at least the 1st-millennium BCE. There are six chapters (aṃśas) containing typical puranic literature but the contents primarily revolve around Viṣṇu and his avatars.

Uraga (उरग) is a name mentioned in the Mahābhārata (cf. III.164.30) and represents one of the many proper names used for people and places. Note: The Mahābhārata (mentioning Uraga) is a Sanskrit epic poem consisting of 100,000 ślokas (metrical verses) and is over 2000 years old.

A mountain near Himava. In a previous birth, Gosala Thera saw there a rag robe hanging, to which he paid homage (v.l. Udaka and Udangana). ThagA.i.79; Ap.ii.434.

[«previous (U) next»] — Uraga in Jainism glossary
Source: The University of Sydney: A study of the Twelve Reflections

Uraga (उरग) refers to “snakes”, according to the 11th century Jñānārṇava, a treatise on Jain Yoga in roughly 2200 Sanskrit verses composed by Śubhacandra.—Accordingly, “Also, consider that the state of being a mighty lord over gods, snakes and men (uraga—suroraganaraiśvaryaṃ), which is like a rainbow, immediately becomes annihilated by itself”.

Note: uraga is a Pali compound consisting of the words ura and ga.

[«previous (U) next»] — Uraga in Marathi glossary
Source: DDSA: The Molesworth Marathi and English Dictionary

uraga (उरग).—m S (That goes upon the breast.) A snake or serpent.

[«previous (U) next»] — Uraga in Sanskrit glossary
Source: DDSA: The practical Sanskrit-English dictionary

(-gaḥ) A snake. E. uras the breast, and ga who goes, from gam to go, affix ḍa; also uraṅga and uraṅgama.

Uraga (उरग).—[masculine] a snake (lit. going on the breast).

1) [noun] that which moves on the chest; a snake; a serpent.

3) [noun] (myth.) a class of semi-divine goods with a human face and a serpent body.