Shantinatha means something in Jainism, Prakrit, Hinduism, Sanskrit. If you want to know the exact meaning, history, etymology or English translation of this term then check out the descriptions on this page. Add your comment or reference to a book if you want to contribute to this summary article.

The Sanskrit term Śāntinātha can be transliterated into English as Santinatha or Shantinatha, using the IAST transliteration scheme (?). 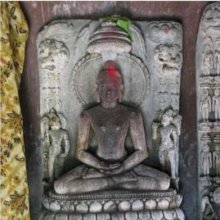 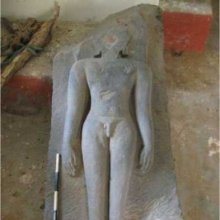 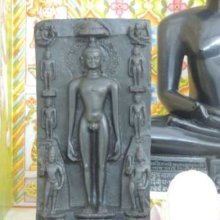 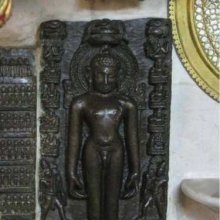 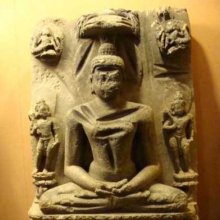 Śāntinātha (शान्तिनाथ) is another name for Śānti, the sixteenth Tīrthaṅkara (Janism recognizes 24 such teachers or Siddhas). His colour is gold (kāñcana), according to Aparājitapṛcchā (221.5-7). His height is 40 dhanuṣa (a single dhanuṣa (or, ‘bow’) equals 6 ft), thus, roughly corresponding to 73 meters. His emblem, or symbol, is an Antelope or deer.

Śāntinātha’s father is Viśvasena and his mother is Acirā according to Śvetāmbara or Airā according to Digambara. It is an ancient Jain practice to worship the Tīrthaṅkara’s parents in various rites, such as the pratiṣṭhāvidhi, according to the Ācāradinakara (14th century work on Jain conduct written by Vardhamāna Sūri).

Regarding the Jina’s parentage, we gather from Jaina books that King Viśvasena was his father and Acirā was his mother. He was born at Hastināpura. In Jaina history of pontiffs, Śāntinātha occupies a very high place. Not only did he revive Jainism, which was in danger of falling into oblivion, but he so consolidated the faith that it never disappeared again. Another extraordinary fact about himis that he was the first Tīrthaṃkara to become a Cakravartī or emperor of the whole of India. The occasion, which gave origin to his name, is that before Śāntinātha’s birth, his mother was able to stay the course of the pestilence which was raging in the kingdom by sprinkling the sufferers with Śānti water. Hence,the name “Śāntinātha” or “Lord of Peace”.

Śāntinātha (शान्तिनाथ) or Śānti refers to the sixteenth of the twenty-four Tīrthaṅkaras praised in the first book (ādīśvara-caritra) [chapter 1] of Hemacandra’s 11th century Triṣaṣṭiśalākāpuruṣacaritra (“lives of the 63 illustrious persons”): a Sanskrit epic poem narrating the history and legends of sixty-three important persons in Jainism.

Accordingly, “[...] we worship the Arhats, who at all times and all places purify the people of the three worlds by their name, representation, substance, and actual existence. [...] May the Jina Śāntinātha, who has brightened the quarters of the sky by the moonlight of his nectar-like words, be a moon to you for dispelling (mental) darkness”.

1) Śāntinātha (शान्तिनाथ) refers to the Sixteenth Jina, according to the Śāntināthacopaī by Jñānasāgara (dealing with Jain universal history such as the Jinas and related figures), which is included in the collection of manuscripts at the ‘Vincenzo Joppi’ library, collected by Luigi Pio Tessitori during his visit to Rajasthan between 1914 and 1919.—The Śāntināthacopaī is structured around the story of the twelve births of the sixteenth Jina, Śāntinātha. [...]

The twelve births of Śāntinātha are:

Chapter I.c - The lives of the Tīrthaṅkaras < [Chapter I - Introduction]