This is the English translation of the Trishashti Shalaka Purusha Charita (literally “The lives of the sixty-three illustrious People”), a Sanskrit epic poem written by Hemachandra in the twelfth century. The work relates the history and legends of important figures in the Jain faith. These 63 persons include: the twenty four tirthankaras , the t...

The subject of Hemacandra’s sources and his imitators would require a volume in itself; as, in one form or another, the well-known episodes in Hindu, as well as Jain, literature are incorporated in the Triṣaṣṭi0. Naturally, Hemacandra follows early Jain versions rather than Hindu ones. The story of Sanatkumāra is a popular one. The versions best known to Europeans are those from the commentary to the Uttarādhyayanasūtra, edited by Jacobi in his Māhārāṣṭrī Erzählungen and translated by Meyer; the one from Haribhadra’s Nemināthacaritra, also edited and translated by Jacobi; and the one in the Kathākośa translated by Tawney. It occurs also in the Pārśvanātha-caritra, treated by Bloomfield in his Life and Stories of the Jaina Savior Pārśvanātha. Hemacandra’s version is the most elaborate of all.

Book V is devoted entirely to Śāntinātha with a wealth of detail equaled only in the Adīśvaracaritra and the Mahāvīracaritra. But, as Śāntinātha is one of the favorite Tīrthaṅkaras with Jain authors, even Hemacandra’s detailed biography is exceeded by others, e.g. Munibhadra. Śāntinātha doubles as a Tīrthaṅkara and Cakravartin. As the reincarnations that run through the biography and play such an important part in it are rather difficult to keep in mind, I give a table of them. 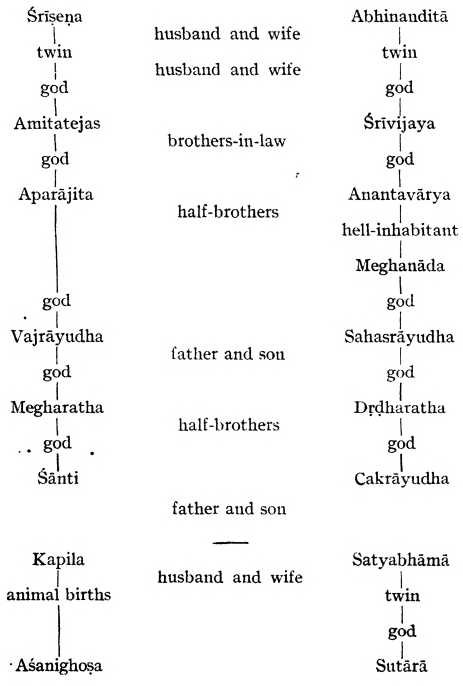