Dhanada means something in Buddhism, Pali, Hinduism, Sanskrit, Jainism, Prakrit, the history of ancient India. If you want to know the exact meaning, history, etymology or English translation of this term then check out the descriptions on this page. Add your comment or reference to a book if you want to contribute to this summary article. 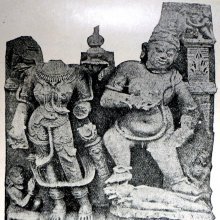 Dhanada (धनद) is a name that Guṇanidhi obtained from Umā, as a result of his severe penance, as mentioned in the Śivapurāṇa 2.1.19. Accordingly, as Umā said to Guṇanidhi:—“[...] dear son, I am delighted at your penance. I shall give you the boon you desire. You will be the lord of treasures and the lord of Guhyakas. You will be the king of Yakṣas, Kinnaras and rulers. You will be the leader of Puṇyajanas and the bestower of wealth [viz., Dhanada] to all (sarva). My friendship with you shall remain for ever. I shall stay near you, very near Alakā, dear friend, in order to increase your love. O son of Yajñadatta, great devotee, come on. This is your mother. Fall at her feet with delighted heart”.

Dhanadā (धनदा) refers to the name of a Lady mentioned in the Mahābhārata (cf. IX.45.13). Note: The Mahābhārata (mentioning Dhanadā) is a Sanskrit epic poem consisting of 100,000 ślokas (metrical verses) and is over 2000 years old.

Dhanadā (धनदा) is the name of the Yakṣiṇī associated with Dhanadā, one the eight Sacred Seats (pīṭha), according to the Yogakhaṇḍa (chapter 14) of the Manthānabhairavatantra, a vast sprawling work that belongs to a corpus of Tantric texts concerned with the worship of the goddess Kubjikā.

Dhanada (धनद) is the name of a deity summoned by the Yamāntaka-mantra and mentioned as attending the teachings in the 6th century Mañjuśrīmūlakalpa: one of the largest Kriyā Tantras devoted to Mañjuśrī (the Bodhisattva of wisdom) representing an encyclopedia of knowledge primarily concerned with ritualistic elements in Buddhism. The teachings in this text originate from Mañjuśrī and were taught to and by Buddha Śākyamuni in the presence of a large audience (including Dhanada).

Dhanada (धनद) is another name for Kubera: protector deity of the northern cremation ground.—Synonyms for Kubera are Dhanada (Saṃvarodayatantra 17.39), Yakṣādhipa (Guhyasamayasādhanamālā 34) or Vaiśravaṇa (Gyatso). Kubera is the custodian of wealth, and king of the yakṣas. Iconographically in the Śmaśānavidhi, Kubera has a human mount (naravāhana), is yellow, and holds a “mongoose spitting out a jewel” and skull bowl. In the Adbhutaśmaśānālaṃkāra he is yellow, mounted on a nidhi and holds a club (left) and makes the gesture of threatening (right).

1) Dhanada (धनद) or Dhanadatārā refers to a deity from the Green Tārā family, according to Buddhist Iconography.—Dhanada Tārā carries the book and the rosary in the first pair of hands, while the second pair carries objects similar to those held by Durgottāriṇī. She has an animal for her Vāhana, is accompanied by eight goddesses originating from the eight syllables of her mantra and bears the image of Amoghasiddhi on the crown. [...] Strictly speaking, only those deities can be called Tārās to whom the mantra: “oṃ tārā tuttāre ture svāhā” is assigned. [...] From the colour of the different Tārās it will be possible to refer them [viz., Dhanada] to their respective Kulas or families presided over by the five Dhyāni Buddhas.

2) Dhanada (धनद) and Sudattā refers to one of the eight Yakṣa and Śakti pair occupying the double lotus in the sādhana of Jambhala (yab-yum form), as described in the 5th-century Sādhanamālā (a collection of sādhana texts that contain detailed instructions for rituals).—Accordingly, when represented in Yab-Yum, he sits on the moon under which there is a double lotus of eight petals. [...] The eight petals of the lotus seat are occupied by the eight Yakṣas [viz., Dhanada], who are identical in all respects with the principal figure. Each Yakṣa is accompanied by a Śakti [viz., Sudattā] with whom he remains in Yab-Yum in the same way as Jambhala remains with Vasudhārā [...]. The Yakṣiṇīs are identical in form with Vasudhārā, who is yellow in complexion, carries the ears of corn and shows the Varada-mudrā in her two hands.]

3) Dhanada (धनद) refers to eight Yakṣa kings, commonly depicted in Buddhist Iconography, and mentioned in the 11th-century Niṣpannayogāvalī of Mahāpaṇḍita Abhayākara.—The Yakṣas are a semi-mythical class of beings who are supposed to preside over treasures and shower wealth on mankind when propitiated. They are all collectively described in the dharmadhātuvāgīśvara-maṇḍala in one brief sentence:—“The Yakṣa kings [viz., Dhanada] hold in their hands the bījapūra (citron) and the nakula (mongoose) in the right and left hands respectively”.—Dhanada is red in colour.

Dhanada (धनद) is the name of a merchant from Śrīpura, according to chapter 5.4 [śāntinātha-caritra] of Hemacandra’s 11th century Triṣaṣṭiśalākāpuruṣacaritra (“lives of the 63 illustrious persons”): a Sanskrit epic poem narrating the history and legends of sixty-three important persons in Jainism.

Accordingly, as Śānti-nātha narrated to king Kurucandra:—“In this very Jambūdvīpa in this same zone Bhārata in the country Kosala in the city Śrīpura there were four merchants’ sons of the same age, like full brothers, Sudhana, Dhanapati, Dhanada, Dhaneśvara. Once upon a time the four together set out for Ratnadvīpa to seek a fortune. Their provisions were carried by Droṇaka. [...]”.

Dhanada is a Sanskrit compound consisting of the terms dhana and da (द).

Part 3: Birth and childhood of Kanakavatī < [Chapter III - Vasudeva’s Marriage with Kanakavatī and her Former Incarnations]

Chapter 247 - The characteristics of a site for Building (vāstu-lakṣaṇa)