Alambusha means something in Buddhism, Pali, Hinduism, Sanskrit, Jainism, Prakrit, biology. If you want to know the exact meaning, history, etymology or English translation of this term then check out the descriptions on this page. Add your comment or reference to a book if you want to contribute to this summary article. 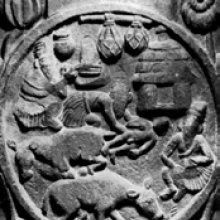 Alambuṣā (अलम्बुषा):—One of the sixty-eight Rasauṣadhi, very powerful drugs known to be useful in alchemical processes related to mercury (rasa), according to Rasaprakāśa-sudhākara (chapter 9).

1) Alambuṣa (अलम्बुष).—Son of the giant Ṛṣyaśṛṅga. He had fought on the side of the Kauravas. (Mahābhārata, Udyoga Parva, Chapter 167, Stanza 33). There was a combat between Alambuṣa and Ghaṭotkaca, on the first day of the battle of Kurukṣetra.

"Alambuṣa shot ninety sharpened pointed arrows at the son of Bhīmasena (Ghaṭotkaca), cut his body in several places. Though he was full of wounds, he fought all the more fiercely". (Bhāṣā Bhārata, Bhīṣma Parva, Chapter 45, Stanzas 43, 44).

Alambuṣa had engaged Abhimanyu, Sātyaki, Ghaṭotkaca, Kuntibhoja and Bhīmasena all mighty men of arms, in single combat, in the Kaurava battle. It is seen that he has got another name, Sālakaṭaṃka. He was killed by Ghaṭotkaca in the battle. (Mahābhārata Droṇa Parva, Chapter 109, Stanzas 22 to 33).

3) Alambuṣa (अलम्बुष).—A king of the Rākṣasas. It is seen that this Alambuṣa was defeated and driven away from the battle-field by Arjuna. (Droṇa Parva, Chapter 167, Stanzas 37 to 47).

Alambusā (अलम्बुसा) refers to the name of a Lady mentioned in the Mahābhārata (cf. I.59.48, I.65). Note: The Mahābhārata (mentioning Alambusā) is a Sanskrit epic poem consisting of 100,000 ślokas (metrical verses) and is over 2000 years old.

Alambuṣā (अलम्बुषा) is the name of an apsara who fell in love with a vasu named Vidhūma at the Court of Brahmā, according to the Kathāsaritsāgara, chapter 9. After being cursed by Indra, Alambuṣā got reborn as Mṛgāvatī, the daughter of King Kṛtavarman.

The Kathāsaritsāgara (‘ocean of streams of story’), mentioning Alambuṣā, is a famous Sanskrit epic story revolving around prince Naravāhanadatta and his quest to become the emperor of the vidyādharas (celestial beings). The work is said to have been an adaptation of Guṇāḍhya’s Bṛhatkathā consisting of 100,000 verses, which in turn is part of a larger work containing 700,000 verses.

Alambuṣā (अलम्बुषा) is another name for Mahāśrāvaṇī, an unidentified medicinal plant, according to verse 5.19-21 of the 13th-century Raj Nighantu or Rājanighaṇṭu. The fifth chapter (parpaṭādi-varga) of this book enumerates sixty varieties of smaller plants (kṣudra-kṣupa). Together with the names Alambuṣā and Mahāśrāvaṇī, there are a total of eight Sanskrit synonyms identified for this plant.

The nymph sent by Sakka to tempt the sage Isisinga, as related in the Alambusa Jataka.

In the present age she was the wife of the monk with reference to whom the Alambusa Jataka was related (J.v.152-61).

Her name appears in the Vimanavatthu (p.16, v.10. See also CSB.29, Pl.15) in a list of nymphs who minister with song and dance to Sakka and his queens.

[«previous (A) next»] — Alambusha in Jainism glossary
Source: archive.org: Trisastisalakapurusacaritra

Alambuśā (अलम्बुशा) refers to one of the eight Dikkumārīs living on the northern Rucaka mountains (in the Rucakadvīpa continent), according to chapter 1.2 [ādīśvara-caritra] of Hemacandra’s 11th century Triṣaṣṭiśalākāpuruṣacaritra (“lives of the 63 illustrious persons”): a Sanskrit epic poem narrating the history and legends of sixty-three important persons in Jainism.

“[...] Eight Dikkumārīs [viz., Alambuśā] from the northern Rucaka Mountains came quickly by means of the Ābhiyogika-gods who had become chariots like the wind (in speed). After bowing to the Jina and to his mother and announcing their purpose as before, they stood on the left holding chauris, singing.[...].”.

Note: In the continent Rucakadvīpa is a circular mountain-ranges Rucaka. On this in the four directions are 4 temples, and on both sides of each temple are 4 mountain peaks, making 8 peaks in each direction. Each peak is inhabited by a Dikkumārī [viz., Alambuśā].—(cf. ‘Die Kosmographie der Inder’ pp. 257f).

Alambusha in India is the name of a plant defined with Sphaeranthus indicus in various botanical sources. This page contains potential references in Ayurveda, modern medicine, and other folk traditions or local practices It has the synonym Sphaeranthus indicus Kurz (among others).

If you are looking for specific details regarding Alambusha, for example diet and recipes, side effects, extract dosage, health benefits, pregnancy safety, chemical composition, have a look at these references.

[«previous (A) next»] — Alambusha in Sanskrit glossary
Source: DDSA: The practical Sanskrit-English dictionary

2) The palm of the hand with the fingers extended.

3) Prahasta, the minister of Rāvaṇa.

4) A demon killed by Ghaṭotkacha.

(-ṣaḥ) 1. The palm of the hand with the fingers extended. 2. Vomiting, sickness. 3. The name of a Rakshasa or goblin. f.

Chapter 9 - The Ninth Day of the Great Battle; The Invincible Bhishma < [Bhisma Parva]