Somaskanda means something in Hinduism, Sanskrit, the history of ancient India. If you want to know the exact meaning, history, etymology or English translation of this term then check out the descriptions on this page. Add your comment or reference to a book if you want to contribute to this summary article. 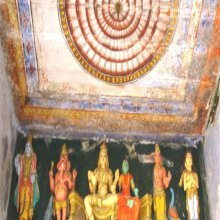 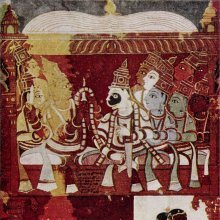 2) Somāskanda is the name of a deity found depicted in the Subramanya Swamy Temple (or Subramaṇya Svāmi Temple) in Thiruparankundram or Parankundram (Paraṅkuṉṟam), representing a sacred place for the worship of Murugan.—Śiva is seated in sukhāsana pose with the left leg folded and is represented with four hands. The upper two hands are in kartarīmukha-hasta, holding the aṅkuśa in the right and the deer in the left. The lower right hand is in patāka-hasta and the lower left hand is in kapittha. Pārvatī is found seated in sukhāsana pose with the right leg folded and the left leg hanging loose. She is represented with two hands in kapittha-hasta. Murukan is found at the centre in araimandi pose, that is, kṣipta (half sitting with knees bent and turned apart) or āyata maṇḍala. When described in iconographic terms, he is said to stand in vaitastika-sthānaka with knees slightly bent. Both the hands are found in kartarīmukha holding śakti in the right and vajra in the left.

Somaskanda.—South Indian representation of Śiva along with Umā and Skanda. Note: somaskanda is defined in the “Indian epigraphical glossary” as it can be found on ancient inscriptions commonly written in Sanskrit, Prakrit or Dravidian languages.

Search found 7 books and stories containing Somaskanda, Somāskanda; (plurals include: Somaskandas, Somāskandas). You can also click to the full overview containing English textual excerpts. Below are direct links for the most relevant articles: