Ayata means something in Hinduism, Sanskrit, Buddhism, Pali, the history of ancient India, Marathi, Hindi. If you want to know the exact meaning, history, etymology or English translation of this term then check out the descriptions on this page. Add your comment or reference to a book if you want to contribute to this summary article.

Alternative spellings of this word include Aayat. 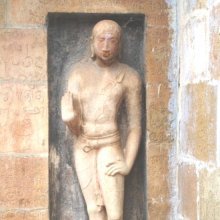 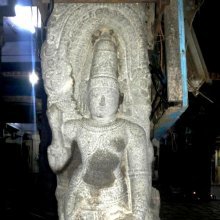 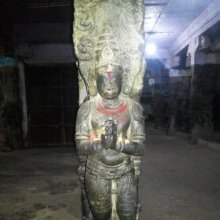 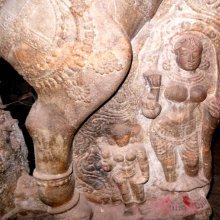 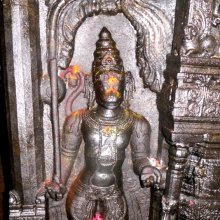 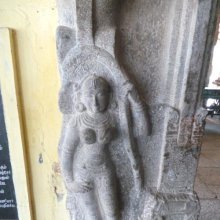 Āyata (आयत) refers to a type of posture (sthāna) for women (strī); defined in the Nāṭyaśāstra chapter 12. Accordingly, “The sthāna will be maintained by a dancer till any movement begins. For during a dance the sthāna is at an end when the cārī (‘dance-steps’) has begun. This is the rule of the sthāna for women and for men as well.”

(Instructions for Āyata): In the Āyata Sthāna (posture) the right foot will be Sama, the left (lit. the other at the side) foot Tryaśra (obliquely placed) and the left raised.

(Uses of Āyata): This sthāna is to be used in invocation, dismissal, observing carefully, thinking and dissimulation. And the first appearance on the stage, scattering handfuls of flowers on the stage, anger due to jealous love, twisting the forefinger, prohibition, pride, profundity, silence, fit of resentment (māna) and looking to the horizon are also to be represented from this Sthāna.

Āyata (आयत) refers to one of the nine maṇḍala (postures of the feet) which represents one of the four “movements of the feet” (pāda) according to the Abhinayadarpaṇa. The second maṇḍala is āyata-maṇḍala where the dancer is found standing in caturasra, bending the knees slightly and obliquely and keeping a distance of vitasti between the feet. This posture is termed as kṣipta pose in Bharatanatyam. This posture is found in iconography but there is no separate term used for this pose. The icon of Somāskanda is found in this posture.

Āyata (आयत) refers to a “stretched moon”, according to the Bṛhatsaṃhitā (chapter 4), an encyclopedic Sanskrit work written by Varāhamihira mainly focusing on the science of ancient Indian astronomy astronomy (Jyotiṣa).—Accordingly, “If the two horns of the moon should appear but slightly raised and far from each other presenting the appearance of a boat, she brings trouble on the sailors but prosperity on mankind at large. [...] If the moon should appear like a bow, there will be war in the land; and those will succeed whose places lie in the direction of the bow-string. If the moon should appear stretched from north to south [i.e., yāmya-uttara-āyata] presenting the appearance of a carriage pole there will be earthquake (within that month)”.

Āyata (आयत) refers to the “width” of a device, according to the Nāradasaṃhitā verse 29.86-95 (pp. 181-184), a Sanskrit work on astrology having the Saralā commentary by Vasatirāma Śarmā.—Accordingly, “The best of the astrologers should measure (dadyāt) that auspicious moment by means of the water clock. With a height of six aṅgulas, with a width [i.e., āyata] of twelve aṅgulas, let a copper bowl be made, like a hemisphere, with ten palas of weight. It is filled in the duration of sixty palas (or, with sixty palas of water), and sinks sixty times in a day and night.

Ayata (अयत).—Rectangle. Note: Ayata is a Sanskrit technical term used in ancient Indian sciences such as Astronomy, Mathematics and Geometry.

Āyata (आयत) refers to “long (eyes)”, according to the Śrīmatottara-tantra, an expansion of the Kubjikāmatatantra: the earliest popular and most authoritative Tantra of the Kubjikā cult. Accordingly, “O goddess, Svacchanda is in the middle, within the abode of the triangle. Very powerful, he has five faces with three times five flaming eyes. [...] O beautiful lady, this, the western one, is yellow like vermillion mixed with musk. Divine, it generates great energy. (The southern face) is somewhat fierce with large sharp teeth and long red eyes [i.e., rakta-āyata-īkṣaṇa]. It is blue like a blue lotus and blue collyrium. Beautiful and fierce, he wears a gem and a snake and his hair is brown. He is called Aghora, contemplating (him) he bestows success in every enterprise”.

[«previous (A) next»] — Ayata in Shaktism glossary
Source: Brill: Śaivism and the Tantric Traditions (shaktism)

Āyata (आयत) refers to “(having) wide (eyes)”, according to the King Vatsarāja’s Pūjāstuti called the Kāmasiddhistuti (also Vāmakeśvarīstuti), guiding one through the worship of the Goddess Nityā.—Accordingly, “[...] Her body is beautiful and bears the hue of vermillion. Its middle part is slim, [and] she is the repository of beauty. She is slightly bent like a young elephant because of her pitcher-like breasts, resembling the temples of a young elephant. Her eyes are moving and wide (āyata) like those of a deer. She is moon-faced, her smiles are gentle, and she serves as the felicitous banner of the Love-god. [...]”.

Āyata.—(CII 1), engaged or appointed. Note: āyata is defined in the “Indian epigraphical glossary” as it can be found on ancient inscriptions commonly written in Sanskrit, Prakrit or Dravidian languages.

[«previous (A) next»] — Ayata in Marathi glossary
Source: DDSA: The Molesworth Marathi and English Dictionary

[«previous (A) next»] — Ayata in Sanskrit glossary
Source: DDSA: The practical Sanskrit-English dictionary

-taḥ An oblong (in geometry).

[«previous (A) next»] — Ayata in Hindi glossary
Source: DDSA: A practical Hindi-English dictionary

2) [adjective] being easy to do or get or of being at ease; easy.

1) [noun] a fit or appropriate way, manner or action.

2) [noun] the state of being ready; readiness; preparedness.

3) [noun] (vīr.) initiation of a discipline by his preceptor by handing over a small, portable image of Śiva.

4) [noun] the quality or state of being easy to do or get or of being at ease; easiness.

1) [adverb] without difficulty, discomfort or awkwardness; in an easy manner; easily.

2) [adverb] without preparation; without being prepared for.

2) [adjective] being longer than another or one’s natural length.

3) [adjective] (said of a four-sided plain figure) having more length than breadth; rectangular.

1) [noun] the state of being abounding in; excessiveness.

4) [noun] the formal seeking of general agreement or consent (for carrying on or commencing a work).

5) [noun] a plane figure with four sides, all the angles being right angles and length and breadth being unequal; a rectangle.

1) [adjective] arrived; reached; has come in.

2) [adjective] brought from or sent from a foreign country; imported.

3) [adjective] one who has come in or arrived at.

2) [noun] that which is brought or bought from a foreign country; an imported thing; import.

3) [noun] the act, process or an instance of importing from a foreign country.

Verse 2.3.186 < [Chapter 3 - The Lord Manifests His Varāha Form in the House of Murāri and Meets with Nityānanda]

A. Description of the Bases (āyatana) < [Chapter XV - The Bases and Elements (āyatana-dhātu-niddesa)]

Chapter XXI - The birth of the Buddha Dīpaṃkara < [Volume I]