Prajnaparamita means something in Buddhism, Pali, Hinduism, Sanskrit. If you want to know the exact meaning, history, etymology or English translation of this term then check out the descriptions on this page. Add your comment or reference to a book if you want to contribute to this summary article. 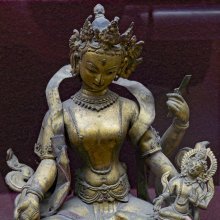 1) Prajñāpāramitā (प्रज्ञापारमिता) refers to one of the female emanations of Akṣobhya, as mentioned in the 5th-century Sādhanamālā (a collection of sādhana texts that contain detailed instructions for rituals).—Prajñāpāramitā is the embodiment of the Mahāyāna Scripture of the same name which was, according to the Buddhist tradition, restored from the nether regions by Nāgārjuna in the second century A. D. Buddha is said to have entrusted this Book of Transcedental Knowledge to the care of the Nāgas in the nether regions, as in his time people were not sufficiently intelligent to grasp the true meaning of the doctrines it contained.

The worship of Prajñāpāramitā was very popular among the Buddhists, and Ārya Asaṅga is credited to have composed one of the Sādhanas for her worship which is said to confer wisdom and erudition on her devotees Nine Sādhanas in the Sādhanamālā describe the procedure of her worship, and of these only two are assigned to the kula of the Dhyāni Buddha Akṣobhya. She too, like Mañjuśrī, could not be assigned to any one of the Dhyāni Buddhas because the Prajñāpāramitā scripture was chronologically earlier than the Dhyāni Buddhas.

2) Prajñāpāramitā (प्रज्ञापारमिता) refers to one of twelve Pāramitā Goddesses in human form, as commonly depicted in Buddhist Iconography, and mentioned in the 11th-century Niṣpannayogāvalī of Mahāpaṇḍita Abhayākara.—Her Colour is yellow; her Symbol is a manuscript on lotus; she has four arms.—The seventh goddess in the series is the famous deity Prajñāpāramitā. Although she is the embodiment of the prajñāpāramitā literature, here she will be described as an embodiment of transcendental intuition and as part of a collection of deities in a group.

“Prajñāpāramitā is of delightful yellow colour. In her left hand she holds the prajñāpāramitā book on lotus. The two principal hands display the dharmacakra-mudrā”.

[The right hand as usual holds the cintāmaṇi banner. Her statues are found in several places. She is represented also in the Chinese collection at Peiping.

The twelve deities collectively have their spiritual father in Ratnasambhava. [...] According to a statement in the maṇḍala all the deities [viz., Prajñāpāramitā] are two-armed, and they hold in the right hand the flag marked with the Cintāmaṇi jewel, and in the left their special symbols. Prajñāpāramitā is an exception since she has two more hands.]

Prajñāpāramitā (प्रज्ञापारमिता) refers to the “perfection of wisdom”, according to the Nāmamantrārthāvalokinī by Vilāsavajra, which is a commentary on the Nāmasaṃgīti.—Accordingly, [while describing Mañjuśrī]—“He is [described in NS 10 as] the jñānasattva since he dwells in the heart of all the tathāgatas. The jñānasattva Mañjuśrī is not the bodhisattva that is the master of the ten [bodhisattva] stages. Rather, he is non-dual gnosis, the perfection of wisdom (prajñāpāramitā) itself”.

2) Prajñāpāramitā (प्रज्ञापारमिता) refers to the “virtue of wisdom” and represents one of the six perfections (pāramitā) according to appendix 6 of the 2nd century Mahāprajñāpāramitāśāstra (chapter VIII). How does the Bodhisattva fulfill the virtue of wisdom (prajñāpāramitā)? Answer: When his great mind reflects (manasikaroti) and analyses (vibhanakti). Thus the Brahmin Govinda, the great minister (mahāmātya), divided the great earth (mahāpṛthivī) of Jambudvīpa into seven parts; he also divided into seven parts a determined number of large and small cities (nagara), of villages (nigama) and hamlets (antarāpaṇa). Such is the virtue of wisdom.

According to Mahāprajñāpāramitāśāstra (chapter XXIX), “what is prajñāpāramitā? Answer.—From the first production of the mind of Bodhi, the Bodhisattvas seek the knowledge of all the aspects (sarvākārajñāna), in the course of which they understand the true nature of dharmas: this wisdom is the prajñāpāramitā”.

Prajñāpāramitā (प्रज्ञापारमिता) refers to the “perfection of insight”, according to the Gaganagañjaparipṛcchā: the eighth chapter of the Mahāsaṃnipāta (a collection of Mahāyāna Buddhist Sūtras).—Accordingly, “Further, the so-called ‘insight (prajñā)’ is a word for calm because it is free from the flame of false discrimination; [...] a word for cultivation because it is the entering into the way of non-duality; a word for awakening because of the remarkable perfect awakening; a word for the dharma because it is free from desire. Since the light of knowledge is the entrance into such a word, and not dependent on others, it is called insight. Since it is in accordance with the sky-like teaching among all the teachings of the Buddha, he accordingly does not produce thought-constructions or fiction even concerning the smallest dharma. That is the perfection of insight (prajñāpāramitā) of the Bodhisattva becoming like the expanse of the sky. [...]”.

Prajñāpāramitā (प्रज्ञापारमिता) refers to one of the Navadharma (“collection of nine texts”) employed for ritualistic practices in Kathmandu Valley, in the era of Mahindra Vira Vikram Shah (r. 1955–1972).—Cf. Tuladhar–Douglas 2006, 144–147 and von Rospatt 2015, 819–821. The latter remarks that “these canonical works are not so much studied for their content as liturgically recited or put to other ritual uses”.

Prajñāpāramitā (प्रज्ञापारमिता) or simply prajñā refers to the “perfection of wisdom” and represents the last of the “six perferctions” (ṣaṭpāramitā) as defined in the Dharma-saṃgraha (section 17). The Dharma-samgraha (Dharmasangraha) is an extensive glossary of Buddhist technical terms in Sanskrit (e.g., ṣaṣ-pāramitā and prajñā-pāramitā). The work is attributed to Nagarjuna who lived around the 2nd century A.D.

Prajñāpāramitā is a generic term for a series of Mahāyāna texts known as the "Perfection of Wisdom" discourses. These texts, the earliest of which date around the 1st century BCE, are among the first known Mahāyāna literature, and are aptly named, due to their special interest in the understanding of the nature of wisdom or prajñā.

Western scholars often consider the earliest sūtra in the Prajñāpāramitā class to be the Aṣṭasāhasrikā Prajñāpāramitā Sūtra or "Perfection of Wisdom in 8,000 Lines", which was probably put in writing in the 1st century BCE.

Prajñāpāramitā (प्रज्ञापारमिता) or Parṇaśavarī refers to the fifth of “seven days” (saptavāra) classified as a dhāraṇī according to a 17th-century Sanskrit manuscript from Nepal .—This collection associates each dhāraṇī with a specific day of the week, a tradition going back to at least the sixteenth century in Nepal.

Prajñāpāramitā is a Sanskrit compound consisting of the terms prajñā and pāramitā (पारमिता).

Chapter 4.2 - Reality in Madhyamika (b): Nature of Prajna

Preliminary note: Hearing of the name of the Buddhas < [Part 3 - Bringing innumerable beings to abhisaṃbodhi]

Note (3): The Eleven Knowledges in the Mahāyāna < [Part 1 - The eleven knowledges (jñāna, ñāṇa)]

Bibliography Of Sūtras, Tantras And śāstras

Part 8 - The View From The Center