Pampa means something in Hinduism, Sanskrit, the history of ancient India, Hindi. If you want to know the exact meaning, history, etymology or English translation of this term then check out the descriptions on this page. Add your comment or reference to a book if you want to contribute to this summary article.

Alternative spellings of this word include Pump. 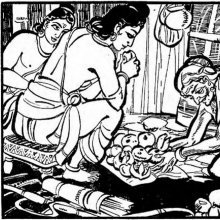 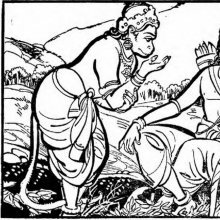 Pampā (पम्पा) is the name of a sacred river as mentioned in the Śivapurāṇa 1.12, “somehow men must strive to find a residence in a holy centre. On the shores of the ocean in the confluence of hundreds of rivers there are many such holy centres (puṇyakṣetra or tīrtha) and temples. [...] By residing on the banks of the auspicious rivers Sarasvatī, Pampā, Kanyā and Śvetanadī one shall attain Indraloka”.

Pampā (पम्पा) is the name of a lake (sara / saras) near the Ṛṣyamūka mountain, as mentionedin the Kathāsaritsāgara, chapter 107. Accordingly, “... and on the banks of the sanctifying Pampā lake near that mountain [Ṛṣyamūka] he [Naravāhanadatta] ate fruits and roots of heavenly flavour, and he drank the holy water of the lake, which was rendered delicious and fragrant by the fruits dropped from trees on its banks, as a relish to his meal of deer’s flesh”.

The Kathāsaritsāgara (‘ocean of streams of story’), mentioning Pampā, is a famous Sanskrit epic story revolving around prince Naravāhanadatta and his quest to become the emperor of the vidyādharas (celestial beings). The work is said to have been an adaptation of Guṇāḍhya’s Bṛhatkathā consisting of 100,000 verses, which in turn is part of a larger work containing 700,000 verses.

Pampa is one of the places visited by Chaitanya during his pilgrimage in Southern India between April 1510 and January 1512.—Pampa.—The ancient and Puranic name of the Tungabhadra. The village of Hampi (the site of the famous capital Vijaynagar) was originally known as Pampa-tirtha. This name (also Pampa-saras) is now borne by a tank on the Haidarabad side of the Tungabhadra near Anegundi. (Bellary Gazetteer, 6, 261).

2) Name of a river in the south of India.

(-mpā) 1. The name of a river, in the south of India. 2. Name of a lake in the Dandaka forest. E. pā to drink, pa Unadi aff., man inserted, and the radical vowel made short.

2) of a lake, [Raghuvaṃśa [Scholiast or Commentator]]

Paṃpa (ಪಂಪ):—[noun] one of the two equal parts of a whole; a half portion.