Mela means something in Buddhism, Pali, Hinduism, Sanskrit, Marathi, Jainism, Prakrit, Hindi, biology. If you want to know the exact meaning, history, etymology or English translation of this term then check out the descriptions on this page. Add your comment or reference to a book if you want to contribute to this summary article. 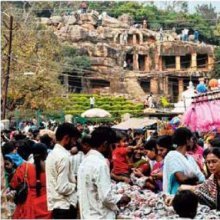 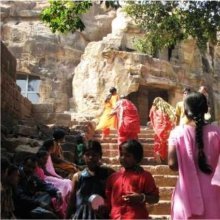 By the time Venkatamakhin formulated the melakarta ("mela") system, the grama system was no longer in use. Unlike the grama system, the mela system uses the same starting svara. It forms the scales by varying the intervals of the subsequent svaras, and does not specify a fixed interval for a svara in terms of shrutis.

Melā (मेला) is another name for Mahānīlī which is a variety of Nīlī: a medicinal plant possibly identified with Indigofera tinctoria Linn. (“true indigo”), according to verse 4.80-83 of the 13th-century Raj Nighantu or Rājanighaṇṭu. The fourth chapter (śatāhvādi-varga) of this book enumerates eighty varieties of small plants (pṛthu-kṣupa). Together with the names Melā and Mahānīlī, there are a total of eight Sanskrit synonyms identified for this plant.

Mela (मेल) refers to “union”, according to the Mahānayaprakāśa verse 2.1-35, while explaining the cycles of the goddesses of consciousness.—Accordingly, “That same (energy of consciousness) is the (goddess) who devours destruction (saṃhārabhakṣiṇī). She is the perception consisting of the manifestation of all things within supreme consciousness in a state of oneness (sāmarasya), and so is Union (mela). The inner abiding state of the light (of consciousness) as a state of oneness is the withdrawal of (all) manifestations (ābhāsa) (brought about) when this same (energy) has turned in on itself in all respects (samantata). [...]”.

Melā (मेला) refers to the “secret meeting” with native women in Tantric Buddhism, according to the 9th-century Vajraḍākatantra. Accordingly, the Vajraḍākatantra tells that the secret meeting is held at night especially in the holy districts together with native women. Identification of one’s ritual fellow, communication and some ritual proceeding sare supposed to be done with secret signs (chomā). Chapter 18.75 give some information on places where the meeting is geld i.e. local fields or seats of goddesses, town or village, or the top of the mountain.

Chapter 36 argues concisely about  the content of the meeting (melā), focussing particularly on the importance of the sexual yoga. Every day, every month or every year, or in accordance with the time when “empowerment” arises in one’s body, a Yogin should perform ‘dance’ (nāṭya) (=sexual yoga) to obtain the accomplishment of mudrā.

1) Mela in Togo is the name of a plant defined with Sorghum bicolor in various botanical sources. This page contains potential references in Ayurveda, modern medicine, and other folk traditions or local practices It has the synonym Panicum frumentaceum Salisb. (among others).

If you are looking for specific details regarding Mela, for example health benefits, side effects, chemical composition, pregnancy safety, extract dosage, diet and recipes, have a look at these references.

mēlā (मेला).—m or a (The preterit of maraṇēṃ used as a noun or an adjective.) A dead person, or dead. This is the never-failing term of abuse by females to or of an offending male, implying that he is but a corpse or carcass. 2 Dead, i. e. flat, stale, spiritless, vapid &c. Used in variations of this sense in combination with numerous nouns of all classes; as mēlā cunā Dead lime,--lime that has been wrought up into mortar and applied in building. mēlī bhākara Dead bread,--food obtained without service or labor; bread of idleness. See mēlēṃ anna. mēlī mātī Earth that has been used or applied (in building). 2 Dry, ununctuous, uncohering earth. 3 Rotten earth: also earth of saline incrustations. mēlēṃ anna Dead victuals or provision, -food got without working for it (i. e. in the dishonorable way of sponging or, when uncanonical, begging); "res non parta labore." v khā. mēlēṃ kātaḍēṃ Dead skin. mēlēṃ kāma Any lifeless work or business; any mere labor devoid of excitement or exercise for mind or heart. mēlēṃ tūpa The residue of a quantity of ghee after consumption or application. mēlēṃ tēla Oil (as of a lamp) remaining unconsumed, stale oil. mēlēṃ nakha Dead, dry, or fungous nail. mēlēṃ pāṇī Water deprived of its air through boiling or heating: also water that has been used or applied. mēlēṃ māsa Dead or proud flesh. mēlēṃ rakta Dead (i. e. extravasated) blood: also effused blood, gore: also semi-animate or poor blood, as that of aged persons. mēlēṃ rājya An extinct sovereignty or sway. mēlēṃ lihiṇēṃ Unengaging or uninteresting writing, i. e. the business of copying. mēlēṃ hatyāra or -hatēra A hollow or untrusty weapon, i. e. a musket, matchlock, cannon &c. which, under whatever management, may yet fail of discharging its ball. Opp. to jīvanta hatyāra. mēlyācā pāḍa caḍhaṇēṃ or jāṇēṃ in. con. To become of the value of a corpse, i. e. to lose all value. mēlyācyā māgēṃ kōṇhī marata nāhīṃ No one dies because of the death of another; i. e. no one absolutely gives up his life because of a privation or loss.

mēḷa (मेळ).—m (mēla S) Agreement, concord, harmonious consistency together. 2 Agreement, tally, balancing (as of an account). 3 A band (of musicians &c.) 4 A couple of serpents in coitu. 5 The efflorescence of the bamboo &c.

mēḷā (मेळा).—m (mēlā S) A concourse of people; a gathering or an assembly; esp. as at stated periods for religious or commercial purposes; a fair &c. v bhara, jama. 2 A company of arbitrators: hence Judgment by arbitration, or a judgment passed. mēḷyāsa miḷaṇēṃ To join or unite with; to go over unto and amongst as one of.

mēḷā (मेळा).—m A concourse of people; a gather- ing. Judgment by arbitration.

2) A company, assembly, a society.

(-laḥ-lā) Meeting, union, assemblage; in the modern dialects, applied to a large concourse of people collected at stated periods for religious or commercial purposes, as at Haridwar, &c. f.

3) [from mela] b f. an association, assembly, company, society, [Pañcatantra]

Mela (मेल) in the Sanskrit language is related to the Prakrit words: Mela, Melava, Melāva.

1) Mela (मेल) in the Prakrit language is related to the Sanskrit word: Mela.

1) [noun] the state of being associated; companionship; fellowship; partnership; association.

2) [noun] a combination of parts into a pleasing or orderly whole; congruity; harmony.

4) [noun] a large number of persons or things gathered together; a multitude.

5) [noun] a group of persons gathered together to transact a business, disccuss, etc.; an assembly.

6) [noun] something that entertains; an interesting, diverting or amusing thing; entertainment.

7) [noun] a gathering of people held usu. at regular intervals for barter and sale of goods; a fair.

9) [noun] a programme of dance or vocal or instrumental music, in which a number of artists perform together; a concert.

12) [noun] a struggle for victory or superiority, a competition; a contest.

13) [noun] (fig.) a long, pitiful cry of grief and pain by several people together.

1) [noun] the state of being associated; companionship; fellowship; partnership; association.

2) [noun] a combination of parts into a pleasing or orderly whole; congruity; harmony.

4) [noun] a large number of persons or things gathered together; a multitude.

5) [noun] a group of persons gathered together to transact a business, disccuss, etc.; an assembly.

6) [noun] something that entertains; an interesting, diverting or amusing thing; entertainment.

7) [noun] a gathering of people held usu. at regular intervals for barter and sale of goods; a fair.

9) [noun] a programme of dance or vocal or instrumental music, in which a number of artists perform together; a concert.

12) [noun] a struggle for victory or superiority, a competition; a contest.

13) [noun] (fig.) a long, pitiful cry of grief and pain of several people together.

Fairs and Festivals observed at Udayagiri and Khandagiri < [Chapter 8]

14. The river Gomatī and its present status < [Chapter 6 - Changing trends of the Rivers from Vedic to Purāṇic Age]