Brahmacarini means something in Hinduism, Sanskrit, Hindi. If you want to know the exact meaning, history, etymology or English translation of this term then check out the descriptions on this page. Add your comment or reference to a book if you want to contribute to this summary article.

Alternative spellings of this word include Brahmacharini. 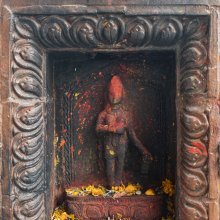 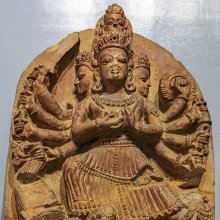 [«previous (B) next»] — Brahmacarini in Purana glossary
Source: archive.org: Nilamata Purana: a cultural and literary study

Brahmacāriṇī (ब्रह्मचारिणी) is the name of a Goddess that was once worshipped in ancient Kashmir (Kaśmīra) as mentioned in the Nīlamatapurāṇa.—These Goddesses (e.g., Brahmacāriṇī) form the shining galaxy of female deities worshipped by the people of Kaśmīra.

Brahmacāriṇī (ब्रह्मचारिणी) refers to “she who is celibate”.—[...] Kubjikā is said to be naked occasionally in the texts but she is not commonly visualized naked. Perhaps we should associate this form with the naked, celibate (brahmacāriṇī) goddess Mitranātha, the founder of the Transmission of the Child, sees sitting in a fire performing austerities. According to the Kularatnoddyota this is how the goddess appears prior to her entry into the Liṅga. And, it seems, that according to the myth of her origin recounted in the Kubjikāmatatantra, she is naked when she emerges out of it.

Brahmacāriṇī (ब्रह्मचारिणी) refers to one of the nine Navadurgā which literally means the “nine forms of Goddess Durgā”, and constitute, according to Vedic scriptures, the manifestation of Durgā in Her nine different aspects. [...] Each goddess [viz., Brahmacāriṇī] has a different form and a special significance.

[«previous (B) next»] — Brahmacarini in Sanskrit glossary
Source: DDSA: The practical Sanskrit-English dictionary

2) a woman who observes the vow of chastity.

[«previous (B) next»] — Brahmacarini in Hindi glossary
Source: DDSA: A practical Hindi-English dictionary

1) [noun] an unmarried man or a man under a vow to remain unmarried.

2) [noun] (fem.) one who abstains from sexual intercourse.

1.3. Pramāṇas: Basic Introduction < [Chapter 2 - Analysis on the Basis Of Epistemology]