Varadahasta means something in Hinduism, Sanskrit, Marathi. If you want to know the exact meaning, history, etymology or English translation of this term then check out the descriptions on this page. Add your comment or reference to a book if you want to contribute to this summary article. 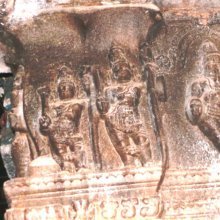 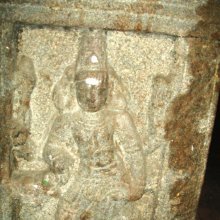 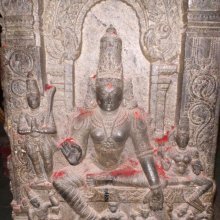 The Varadahasta (वरदहस्त) shows the pose of the hand while conferring a boon. In this pose the palm of the left hand, with the fingers pointing downwards is exposed to the observer, either as fully opened and emptty or as lightly carrying a small bolus.

Varadahasta (वरदहस्त) or simply Varada refers to “benevolence” and represents one of the twenty-four gestures with a single hand, as defined according to texts dealing with śilpa (arts and crafs), known as śilpaśāstras.—Accordingly, pratimā-lakṣaṇa (body postures of the icons) is comprised of hand gestures (hasta, mudrā or kai-amaiti), stances/poses (āsanas) and inflexions of the body (bhaṅgas). There are thirty-two types of hands [viz., varadahasta] classified into two major groups known as tolirkai (functional and expressive gestures) and elirkai (graceful posture of the hand).

(Description of Varada-hasta): When the abhaya-hasta is held upside down with the palm facing outward, it is known as varada-hasta.

Varadahasta (वरदहस्त) refers to the “gestures of boon bestowal”, according to the Manthānabhairavatantra, a vast sprawling work that belongs to a corpus of Tantric texts concerned with the worship of the goddess Kubjikā.—Accordingly, “(Kāmahā) the Maṅgalā from Kāmarūpa has four faces and is very powerful. She has two arms and sits on a ghost. She makes gestures of fearlessness and boon bestowal [i.e., varadahasta]; she is well adorned with all the ornaments and has a large, pleasing and auspicious face”.

Varadahasta (वरदहस्त) refers to “one showing the wish-granting mudrā” and is used to describe Tumburu, according to the Netratantra of Kṣemarāja: a Śaiva text from the 9th century in which Śiva (Bhairava) teaches Pārvatī topics such as metaphysics, cosmology, and soteriology.—Accordingly, [verse 11.1-24ab, while describing the appearance and worship of Tumburu]—“[...] [He worships] Deva as Tumburu in the middle of an eight petaled lotus, in the maṇḍala, [starting] in the East, O Devī. [...] Adorning Deva is a white flower and a spade. [He] holds an elephant hook and noose. Deva [has] a thread with a cakra at the access, hand [held in the] wish-granting and protective [mudrās] (varadahasta—varadābhayahastaṃ). [...]”.

varadahasta (वरदहस्त).—m (S) The bountiful or beneficent hand (of the Deity &c.) 2 Applied to a teacher who gets his scholars on; to one who confers prosperousness upon all dependent upon or connected with him; to one whose imposed hand confers blessing.

Varadahasta (वरदहस्त):—[=vara-da-hasta] [from vara-da > vara] m. the beneficent hand (of a deity or benefactor of any kind), [Monier-Williams’ Sanskrit-English Dictionary]

Search found 3 books and stories containing Varadahasta, Varada-hasta; (plurals include: Varadahastas, hastas). You can also click to the full overview containing English textual excerpts. Below are direct links for the most relevant articles: