Tataka means something in Hinduism, Sanskrit, Marathi, Hindi. If you want to know the exact meaning, history, etymology or English translation of this term then check out the descriptions on this page. Add your comment or reference to a book if you want to contribute to this summary article. 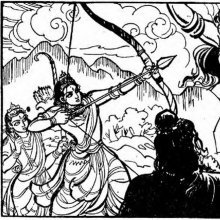 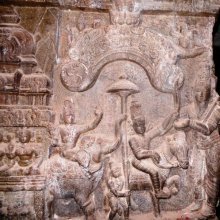 Tāṭakā (ताटका).—A fierce demoness. It was because of a curse of the sage Agastya that Tāṭakā became a demoness.

There was once a great Yakṣa named Suketu, a son of Surakṣa. He did penance to propitiate Brahmā to get a child and by the blessing of Brahmā Suketu got a daughter named Tāṭakā. Brahmā gave her the strength of a thousand elephants. Taṭakā was by nature interested in cruel and violent deeds and doing deeds of magic. She made Sunda, son of Jharjha, her husband. She got two sons named Mārīca and Subāhu. They also became mighty ones great in deeds by magic.

Once Sunda attacked the āśrama of Agastya in a mood of intoxicated arrogance. Sunda was burnt to death in the fire of his fury. Tāṭakā coming to know of the death of her husband got angry and attacked the āśrama of Agastya with her sons. Agastya cursed them and made them into demons. Tāṭakā and her sons who immediately turned themselves into fierce-looking demons went first to Pātāla with Sumālī, father of the demon race and then went with Rāvaṇa, King of the demons, to Laṅkā and stayed there. With the help of Rāvaṇa, Tāṭakā conquered the great deep forest near Kārūṣa and stayed there with her sons. None, devas, demons or men, dared to step into that forest. Even the Sun or Clouds avoided passing above that forest.

It was at that time that Śrī Rāma and Lakṣmaṇa came to that forest with Viśvāmitra. Tāṭakā attacked Śrī Rāma and Rāma killed her with one arrow. The heavy body of the demoness fell to the ground like a big mountain. Her soul then rose up as a beautiful Gandharva lady and Tāṭakā who was thus released from the curse praised Śrī Rāma and left the place. Chapters 24 to 26 of Bāla Kāṇḍa, Vālmīki Rāmāyaṇa and Kamba Rāmāyaṇa).

Tataka was a shape-shifting Yaksha woman, the mother of the demons Subahu and Maricha. She was the daughter of a Yaksha named Suketu, who obtained her by performing a penance directed to Lord Brahma. Suketu had desired a son, but Brahma gave his daughter the strength of a thousand elephants instead.

tāṭakā (ताटका).—f (S The name of the sister of rāvaṇa) A vixen, virago, shrew, a Xanthippe. Applied also to a female considered as monstrous and hideous.

tāṭakā (ताटका).—f The name of the sister of rāvaṇa A vixen.

(-kaḥ) A pond deep enough for the lotus and other aquatic flowers. E. taṭa a band, and ak to go, affix ac; or taṭa-ākan also taḍāka; also tāṭāka and taṭīka.

Taṭāka (ತಟಾಕ):—[noun] a body of water either natural or artificially formed; a lake; a pond; a water tank.

Tāṭaka (ತಾಟಕ):—[noun] a dishonest, knavish or mischievous man; a scoundrel; a rogue.