Mahishasura means something in Hinduism, Sanskrit. If you want to know the exact meaning, history, etymology or English translation of this term then check out the descriptions on this page. Add your comment or reference to a book if you want to contribute to this summary article.

The Sanskrit term Mahiṣāsura can be transliterated into English as Mahisasura or Mahishasura, using the IAST transliteration scheme (?). 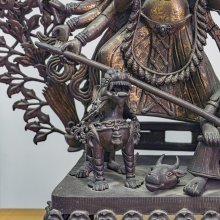 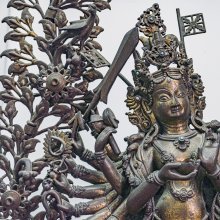 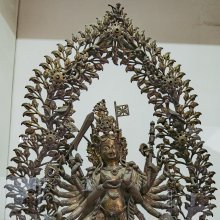 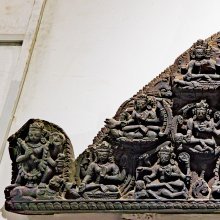 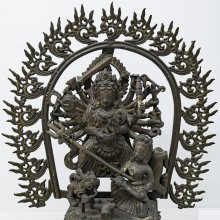 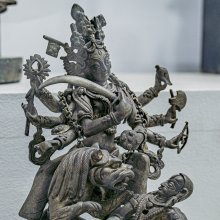 Mahiṣāsura (स्त्रीघ्न) is an Asura king who started the battle between the gods (devas) between the demons (asuras) in order to win over the hand of Trikalā, according to the Varāhapurāṇa chapter 94. Trikalā is a Goddess born from the combined looks of Brahmā, Viṣṇu and Maheśvara (Śiva). Mahiṣāsura faced Indra in battle whom he also defeated.

Mahiṣāsura (or “the buffalo-demon”) represents the gross negative aspect of Tamas which obstructs and thwarts spiritual progress. As the personification of the Tāmasic Ahaṃkāra — he constantly and adroitly changes shape whenever he is confronted by Durgā.

Mahishasura was a mighty Asura, born to the King of Asuras named Rambha (different from the divine nymph Rambha). When Rambha was walking in the street, he saw a beautiful female buffalo. He was immediately smitten with desire and sated his lust on the poor animal. The demon Mahishasura was born of this union. In Sanskrit Mahisha=Buffalo.

He became the king of the Asuras after his father. As was the custom of the Asuras, he prosecuted a terrible war with the Devas. To help his kinsmen gain the upper hand, Mahishasura performed a tough penance directed at Lord Brahma. Pleased, the Lord granted a boon to him that death shall not approach him, save by means of a woman.

Finally, he was born a third time in śvetavarāha kalpa but he remembered his previous births by the grace of sage Jaigīṣavya. Having realized the possibility of death again at the hands of Mahāmāyā , he resorted to ekānta bhakti (kāyika, vācika, mānasika) and immersed himself in the upāsanā of Parāśakti. After twelve-thousand years of upāsanā, Bhagavatī manifested before him and he addressed her thus:

Mahiṣāsura (महिषासुर):—[from mahiṣa > mah] m. the Asura or demon Mahiṣa (from whom the country of Mysore is said to take its name), [Religious Thought and Life in India 431]

The Concept of Durga in Mahabalipuram < [July – September 1976]

The Concept of Durga in Mahabalipuram < [October - December 1976]