Katyayani means something in Hinduism, Sanskrit. If you want to know the exact meaning, history, etymology or English translation of this term then check out the descriptions on this page. Add your comment or reference to a book if you want to contribute to this summary article. 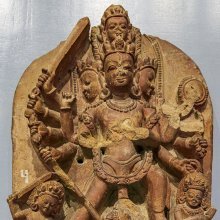 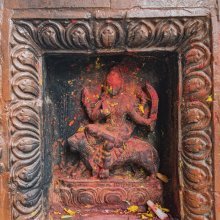 Kātyāyanī (कात्यायनी):—The name Goddess Durgā took when she emerged from the beams of light radiating from the bodies of the gods to fight the demon named Mahiṣāsura. Durgā represents the combined energies of all the gods.

Kātyāyaṇī (कात्यायणी) refers to a form of the Goddess, according to the Kularatnoddyota (chapter 9).—We are told in the Kularatnoddyota that prior to the goddess’s incarnation in the nineteenth kalpa as Dakṣa’s daughter, she will come into the world to kill the demons Caṇḍa and Muṇḍa. Then as Durgā and Kātyāyaṇī in “a black and brown (kṛṣṇapiṅgalā)” form she will slay Mahiṣa, the king of the demons. She then appears again in the end of the Dvāpara Age, as described in the Purāṇas, to slay the evil king Kaṃsa and thereby save the newly-born Kṛṣṇa. Again, the Jayadrathayāmala says practically the same, identifying the goddess of the nineteenth and last age as Bhadrakālī.

Kātyāyanī (कात्यायनी) refers to one of the nine Navadurgā which literally means the “nine forms of Goddess Durgā”, and constitute, according to Vedic scriptures, the manifestation of Durgā in Her nine different aspects. [...] Each goddess [viz., Kātyāyanī] has a different form and a special significance.

Kātyāyanī (कात्यायनी).—The material energy personified. She is also known as Durgā and Kālī and by many other names.

Kātyāyanī (कात्यायनी).—One of the two wives of Yājñavalkya. After withdrawing completely from worldly activities, Yājñavalkya asked his wives to divide his worldly assets equally between them. But Maitreyī the other wife, being of a deeply spiritual nature, Kātyāyanī herself had to undertake the burden of all the material affairs. (Bṛhadāraṇyakopaniṣad).

1) Kātyāyanī (कात्यायनी) is one of the epithets of Durgā, according to the Kathāsaritsāgara, chapter 53. Accordingly, as Vīravara praised Durgā: “... thou art the principle of life in creatures; by thee this world moves. In the beginning of creation Śiva beheld thee self-produced, blazing and illuminating the world with brightness hard to behold, like ten million orbs of fiery suddenly produced infant suns rising at once, filling the whole horizon with the circle of thy arms, bearing a sword, a club, a bow, arrows and a spear. And thou wast praised by that god Śiva in the following words ... [Kātyāyanī, etc...]”. Also, “... when Skanda, and Vasiṣṭha, and Brahmā, and the others heard thee praised, under these [eg., Kātyāyanī] and other titles, by Śiva well skilled in praising, they also praised thee. And by praising thee, O adorable one, immortals, Ṛṣis and men obtained, and do now obtain, boons above their desire. ”

2) Kātyāyanī (कात्यायनी) is the name of a female religious mendicant (pravrājikā), according to the Kathāsaritsāgara, chapter 101. Accordingly, as Kātyāyanī said to Sundarasena: “... listen, I will tell you the whole story. I am in the habit of wandering about the whole of this earth (pṛthivī) and the islands (dvīpa), for the sake of visiting sacred bathing-places (tīrtha) and other holy spots. And in the course of my travels I happened to visit Haṃsadvīpa”.

The Kathāsaritsāgara (‘ocean of streams of story’), mentioning Kātyāyanī, is a famous Sanskrit epic story revolving around prince Naravāhanadatta and his quest to become the emperor of the vidyādharas (celestial beings). The work is said to have been an adaptation of Guṇāḍhya’s Bṛhatkathā consisting of 100,000 verses, which in turn is part of a larger work containing 700,000 verses.

1) An elderly or middle aged widow (dressed in red clothes).

2) [noun] an elderly or middle-aged widow (dressed in red clothes).

Part 4 - The Teaching of the Bhāgavata Purāṇa < [Introduction]