Rakta means something in Buddhism, Pali, Hinduism, Sanskrit, Jainism, Prakrit, Marathi. If you want to know the exact meaning, history, etymology or English translation of this term then check out the descriptions on this page. Add your comment or reference to a book if you want to contribute to this summary article. 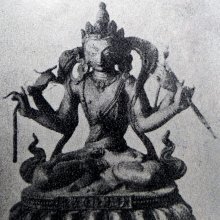 1) Rakta (रक्त):—Sanskrit word for ‘blood’. It is associated with Kāma, which is the second seat of the Svādhiṣṭhāna-chakra, according to the Kubjikāmata-tantra.

2.a) Raktā (रक्ता):—One of the twelve guṇas associated with Vahni, the third seat of the Svādhiṣṭhāna-chakra. Another guṇa also named Raktā, is associated with Gola, the sixth seat of the Svādhiṣṭhāna-chakra. According to tantric sources such as the Śrīmatottara-tantra and the Gorakṣasaṃhitā (Kādiprakaraṇa), these twelve guṇas are represented as female deities. According to the Ṣaṭsāhasrasaṃhitā however, they are explained as particular syllables. They (e.g. Raktā) only seem to play an minor role with regard to the interpretation of the Devīcakra (first of five chakras, as taught in the Kubjikāmata-tantra).

1) Rakta (रक्त) is a Sanskrit technical term translating either to the color “red”, or to the concept of being “coloured”, “dyed”, “painted” etc. It is used throughout Ayurvedic literature such as the Suśrutasaṃhita or the Carakasaṃhita.

2) Raktā (रक्ता) is another name (synonym) for Kusumbha, which is the Sanskrit word for Carthamus tinctorius (safflower), a plant from the Asteraceae family. This synonym was identified by Narahari in his 13th-century Rājanighaṇṭu, which is an Ayurvedic medicinal thesaurus. Certain plant parts of Kalamba are eaten as a vegetable (śāka).

3) Rakta (रक्त) is a Sanskrit word referring to a kind of aquatic bird. The meat of this animal is part of the māṃsavarga (‘group of flesh’), which is used throughout Ayurvedic literature. The animal Rakta is part of the sub-group named Ambucārin, refering to animals “which move on waters”. It was classified by Caraka in his Carakasaṃhitā sūtrasthāna (chapter 27), a classical Ayurvedic work. Caraka defined such groups (vargas) based on the dietic properties of the substance.

Raktā (रक्ता) is another name for Raktaguñjā, one of the two varieties of Guñjā: a medicinal plants identified with Abrus precatorius (Indian licorice or rosary pea) from the Fabaceae or “legume family” of flowering plants, according to verse 3.113-116 of the 13th-century Raj Nighantu or Rājanighaṇṭu. The third chapter (guḍūcyādi-varga) of this book contains climbers and creepers (vīrudh). Together with the names Raktā and Raktaguñjā, there are a total of sixteen Sanskrit synonyms identified for this plant.

Raktā (रक्ता) is the name of a mind-born ‘divine mother’ (mātṛ), created for the purpose of drinking the blood of the Andhaka demons, according to the Matsya-purāṇa 179.8. The Andhaka demons spawned out of every drop of blood spilled from the original Andhakāsura (Andhaka-demon). According to the Matsya-purāṇa 179.35, “Most terrible they (e.g., Raktā) all drank the blood of those Andhakas and become exceedingly satiated.”

Rakta (रक्त).—A son of Mahiṣāsura. He had two sons called Bala and Atibala. He had also a number of mighty army generals like Dhūmrākṣa and thousand akṣauhiṇīs under each general. (Skanda Purāṇa, 7. 1. 119).

Rakta (रक्त) refers to “red (clouds)”, according to the Śivapurāṇa 2.2.22. Accordingly as Sitā said to Śiva:—“[...] the most unbearable season of the advent of clouds (ghanāgama or jaladāgama) has arrived with clusters of clouds of diverse hues, and their music reverberating in the sky and the various quarters. [...] With the clusters of clouds dark, silvery and red (rakta) in colour clinging to the Mandara mountain (peak), Himālaya appears as the ocean of milk with the birds of diverse colours”.

1) Rakta (रक्त).—The thirtieth Kalpa; Brahmā got a son red in colour, dress and eyes; finding him to be Mahādeva, Brahmā bowed to him and contemplated upon Vāmadeva; Śarva appeared to him and made aṭṭahāsa when were born four sons beginning with Viraja.*

1) Rakta (रक्त, “reddened”) refers to a specific “color of the face” which form part of the histrionic representation (abhinaya), according to the Nāṭyaśāstra chapter 8. According to its instructions, this facial color should be use when “in intoxication and in the Heroic (vīra), the Terrible (bhayānaka) and the Pathetic (karuṇa) Sentiments (rasa)”.

2) Rakta (रक्त, “red”) refers to one of the found original (natural) colors (varṇa), according to Nāṭyaśāstra chapter 23. From these colors come numerous derivative and minor colors (upavarṇa).

According to the Nāṭyaśāstra, “Aṅgāraka (Maṅgala = Mars) should be painted red (rakta)”.

Raktā (रक्ता) refers to one of the twenty-two quarters tones (śruti) existing within an octave, according to the Saṅgīta-ratnākara (“ocean of music and dance”). This work is an important Sanskrit treatise dealing with ancient Indian musicology (gāndharva-śāstra), composed by Śārṅgadeva in the 13th century and deals with both Carnatic and Hindustani music. Raktā has a frequency of 367.9109Hz.

2) Rakta (रक्त) refers to one of the forty-seven tānas (tone) used in Indian music.—The illustration of Rakta (as a deity) according to 15th-century Indian art is as follows.—The colour of his body is yellow. His face is similar to the face of a goat. A viṇā is held with both hands.

Raktā (रक्ता) is the name of a Mātṛkā-Śakti created by Mahārudra in order to control the plague of demons created by Andhakāsura.—Accordingly, Andhaka-Asura tried to kidnap Umā (Devī Pārvatī), and was fiercely attacked by Mahārudra who shot arrows at him from his mahāpināka. when the arrows pierced the body of Andhakāsura, drops of blood fell to earth and from those drops, thousands of Andhakas arose. To control this plague of demons, Mahārudra created Mātṛkā-Śaktis [viz., Raktā] and ordered them to drink the blood of the demons and drain them dry.

Raktā (रक्ता) refers to one of the various Mātṛkā-Śaktis created by Rudra in order to destroy the clones that spawned from Andhaka’s body.—Accordingly, [...] Andhakāsura attempted to abduct Girājanandinī (Pārvatī) and thus ensued a fierce battle between Andhakāsura and the great Rudra, the Lord of Umā. Like raktabīja, every drop of blood that fell from the body of Andhaka created another Asura like him and in no time, the entire world was filled with Andhakas. To destroy the growing number of Andhakas, Rudra created innumerable Mātṛkā-Śaktis [viz., Raktā]. These Śaktis of immense power at once began to drink every drop of blood that flowed from the body of Andhaka, but they could still not effectively contain the emergence of more and more demons.

Rakta (रक्त) or refers to the “red” variety of Avalokiteśvara (Lokeśvara) which is known as Raktalokeśvara, having his Sādhana described in the 5th-century Sādhanamālā (a collection of sādhana texts that contain detailed instructions for rituals).—Two Sādhanas in the Sādhanamālā are devoted to his [i.e., Raktalokeśvara’s] worship, but the two Dhyānas describe two widely different forms of the god.

Raktā (रक्ता) is the name of a river mentioned as flowing through Airāvata together with the Raktodā river. Airāvata is one of the seven regions (kṣetra) of Jambūdvīpa according to Jaina cosmology. Jambūdvīpa sits at the centre of madhyaloka (‘middle world’) is the most important of all continents and it is here where human beings reside.

Rakta (रक्त) participated in the war between Rāma and Rāvaṇa, on the side of the latter, as mentioned in Svayambhūdeva’s Paumacariu (Padmacarita, Paumacariya or Rāmāyaṇapurāṇa) chapter 57ff. Svayambhū or Svayambhūdeva (8th or 9th century) was a Jain householder who probably lived in Karnataka. His work recounts the popular Rāma story as known from the older work Rāmāyaṇa (written by Vālmīki). Various chapters [mentioning Rakta] are dedicated to the humongous battle whose armies (known as akṣauhiṇīs) consisted of millions of soldiers, horses and elephants, etc.

Rakta (रक्त, “red”) refers to one of the five types of Varṇa (color) and represents one of the various kinds of Nāma, or “physique-making (karmas)”, which represents one of the eight types of Prakṛti-bandha (species bondage): one of the four kinds of bondage (bandha) according to the 2nd-century Tattvārthasūtra chapter 8. The karmas rise of which gives the colour attributes to the body are called colour body-making karma (rakta).

rakta (रक्त).—n (S) Blood. rakta pāḍaṇēṃ To force out blood (as by a mantra &c.) rakta lāvūna ghāyāḷānta jāṇēṃ-śiraṇēṃ-paḍaṇēṃ To assume and display the signs and tokens of having been valiantly engaged in battle. raktācēṃ pāṇī karaṇēṃ (To turn one's blood into water.) To waste or weaken one's self by toil, exertion, earnest care &c.

rakta (रक्त).—p S Colored, dyed, stained. 2 Attached to; fond of; affected with love or interest towards.

(-ktaḥ-ktā-ktaṃ) 1. Dyed, tinged, coloured, stained. 2. Red, of a red colour. 3. Fond of, attached to, affected with love or interest towards any object. 4. Pure, purified. 5. Sporting, engaging in play or pastime. m.

Search found 43 books and stories containing Rakta, Raktā; (plurals include: Raktas, Raktās). You can also click to the full overview containing English textual excerpts. Below are direct links for the most relevant articles:

Chapter II - Pathology of the diseases of the eye-joints < [Canto I - Shalakya-tantra (ears, eyes, nose, mouth and throat)]

Chapter XXII - Causes and symptoms of diseases of the nose < [Canto I - Shalakya-tantra (ears, eyes, nose, mouth and throat)]

Chapter 11 - Symptoms and treatment of Gulma (tumour in the belly)

Chapter 13 - Symptoms and treatment of Pandu (anemia) and Kamala (jaundice)

Verse 10.87 < [Section IX - Variations in the Functions of the Brāhmaṇa due to Abnormal Conditions]