Kirtimukha means something in Hinduism, Sanskrit, the history of ancient India. If you want to know the exact meaning, history, etymology or English translation of this term then check out the descriptions on this page. Add your comment or reference to a book if you want to contribute to this summary article. 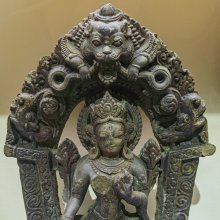 Kīrtimukha (कीर्तिमुख, “face of glory”) refers to a face of a monster, vyāla, lion; it is often used as a nāsī finial.

Kīrtimukha (कीर्तिमुख).—A Śiva gaṇa born out of the matted hair of Śiva with three faces, three tails, three legs and seven hands. The Lord at first asked him to live on corpses, but later on, in appreciation of his valour granted him the boon that if anyone saw the Lord without thinking first about Kīrtimukha, he would meet with his down-fall. (Padma Purāṇa, Uttara Khaṇḍa, Chapter 50).

Kīrti-mukha.—(CII 4), a decorative motif. Note: kīrti-mukha is defined in the “Indian epigraphical glossary” as it can be found on ancient inscriptions commonly written in Sanskrit, Prakrit or Dravidian languages.

1) [noun] an ornamental metal ring or cone for wearing.

2) [noun] a demon-mask placed above the door of Śiva’s temple to drive away evil beings.