Dharmadhatu means something in Buddhism, Pali, Hinduism, Sanskrit. If you want to know the exact meaning, history, etymology or English translation of this term then check out the descriptions on this page. Add your comment or reference to a book if you want to contribute to this summary article. 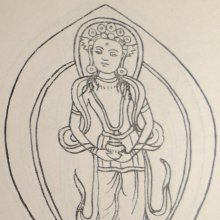 The names of the 108 deities [viz., Dharmadhātu] possbily originate from a Tantra included in the Kagyur which is named “the 108 names of Avalokiteshvara”, however it is not yet certain that this is the source for the Nepali descriptions.

Dharmadhātu (धर्मधातु) is the name of a Buddha under whom Śākyamuni (or Gautama, ‘the historical Buddha’) acquired merit along the first through nine bhūmis, according to the Mahāvastu. There are in total ten bhūmis representing the ten stages of the Bodhisattva’s path towards enlightenment.

Dharmadhātu is but one among the 500 Buddhas enumerated in the Mahāvastu during a conversation between Mahākātyāyana and Mahākāśyapa, both principle disciples of Gautama Buddha. The Mahāvastu is an important text of the Lokottaravāda school of buddhism, dating from the 2nd century BCE.

Dharmadhātu (धर्मधातु) refers to the “fundamental element” and is mentioned as one of the synonyms of Dharmatā (the ‘dharma-nature’ or ‘true nature’ of dharmas), according to Mahāprajñāpāramitāśāstra chapter XLIX. Accordingly, “dharmas taken individually (pṛthak, pratyeka) are empty. These emptinesses have their own respective modalities (viśeṣa) which are, however, Tathatā. Together they form a single emptiness: the dharmadhātu. [...] This dharmadhātu itself is also of two kinds: the first, with a mind free of attachment, distinguishes dharmas as each having its own nature (svabhāva, prakṛti); the second is the immense dharma (apramāṇadharma), i.e., the true nature of dharmas (dharmatā)”.

Notes: The Śrāvakas attain the dharmadhātu, but since their wisdom (prajñā) is limited (sapramāṇa), they cannot speak of its immensity (apramāṇam). In the case of the dharmadhātu, they are like the man who goes to the great ocean (mahāsamudra) to empty out the water but who uses a vessel (bhājana) so small that he cannot collect the immense waters.

While not seeing permanent dharmas, seeing impermanence (anityatā) is a wrong view (mithyādṛṣṭi). And it is the same for the views of suffering, emptiness, non-self and impurity. That is what is called tathatā. [...] Having acquired this tathatā of dharmas, one penetrates into the dharmadhātu, one eliminates all opinions (vipaśyanā) and does not conceive any further beliefs, for “such is its essence. [...] Finally, to completely penetrate (supravidh-) the dharmadhātu is bhūtakoṭi.

Examples of Dharmadhātu: Having cultivated the tathatā, the practitioner enters into the immense dharmadhātu. The dharmadhātu is nirvāṇa; it is indivisible and eludes futile proliferation (niṣprapañca). The dharmadhātu is the fundamental element. Just as in yellow rock there is gold ore, just as in white rock there is silver ore, so, in all the dharmas of the world, there is the ‘nirvāṇa-ore’ (nirvāṇadhātu). [...] When the calf (vatsa) is tied up, it cries and bawls but, when it has found its mother again, it immediately stops crying. It is the same with dharmas: many and diverse, they are dissimilar in being taken (parigraha) and being rejected (utsarga), but as soon as they are gathered into their dharmadhātu, they cease at once: there is no way to go beyond that. That is the dharmadhātu.

Dharmadhātu (धर्मधातु) or simply dharma refers to the “thought element” and represents one of the eighteen elements (dhātu) as defined in the Dharma-saṃgraha (section 25). The Dharma-samgraha (Dharmasangraha) is an extensive glossary of Buddhist technical terms in Sanskrit (e.g., dharma-dhātu). The work is attributed to Nagarguna who lived around the 2nd century A.D.

Dharmadhātu is a Sanskrit compound consisting of the terms dharma and dhātu (धातु).

Part 1b.1f - How consciousness dissolves < [B. The extensive explanation of the nature of karma]

Part 3c - The peaceful dharmakaya < [B. The explanation of the kayas and wisdoms]

Part 1 - How peace is attained < [B. The explanation of the kayas and wisdoms]