Kathi means something in Hinduism, Sanskrit, the history of ancient India, Marathi, Hindi, biology. If you want to know the exact meaning, history, etymology or English translation of this term then check out the descriptions on this page. Add your comment or reference to a book if you want to contribute to this summary article. 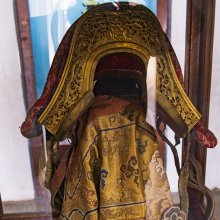 [«previous (K) next»] — Kathi in Shilpashastra glossary
Source: Shodhganga: The significance of the mūla-beras (śilpa)

Kathi or Surikai refers to one of the several “attributes” (āyudha) or “accessories” of a detiy commonly seen depicted in Hindu iconography, defined according to texts dealing with śilpa (arts and crafs), known as śilpaśāstras.—Kathi is a short knife. It is also called as surikai.

Kathi [काथी] in the Hindi language is the name of a plant identified with Indigofera cassioides Rottler ex DC. from the Fabaceae (Pea) family having the following synonyms: Indigofera pulchella, Indigofera leptostachya. For the possible medicinal usage of kathi, you can check this page for potential sources and references, although be aware that any some or none of the side-effects may not be mentioned here, wether they be harmful or beneficial to health.

Kathi [काथी] in the Hindi language is the name of a plant identified with Indigofera heterantha Wall. ex Brandis from the Fabaceae (Pea) family.

Kathi in the Hindi language is the name of a plant identified with Indigofera trifoliata L. from the Fabaceae (Pea) family having the following synonyms: Indigofera moluccana, Indigofera barberi, Indigofera vestita.

Kathi refers to “A caste of Rajput is known as Kathi. As they are physically strong they are known as Kathi”.—It is defined in the glossary attached to the study dealing with Gujarat Folk tales composed by Gujarati poet Jhaverchand Meghani (1896-1947)

1) Kathi is an Assamese term referring to “bamboo splint”.—It appears in the study dealing with the vernacular architecture (local building construction) of Assam whose rich tradition is backed by the numerous communities and traditional cultures.

2) Kathi is also an Assamese term referring to “eaves / veranda”.

kāṭhī (काठी).—f (kāṣṭa S) The stalk, stem, or trunk of a plant. 2 A staff, rod, pole, wand, stick gen.; a flagstaff, a walking stick, the mast or the yard of a ship or boat &c. 3 A blow with a stick. v māra. 4 A land measure,--five cubits and five handbreadths, 1&2044;20th of pāṇḍa or 1&2044;400th of bighā: also the measuring rod. 5 (or śarīrācī kāṭhī) The frame or structure of the body: also (viewed by some as arising from the preceding sense, Measuring rod) stature. 6 Membrum equinum. ēkā kāṭhīnēṃ hākaṇēṃ To heap promiscuously together; to treat of or view as similar or equal (particulars differing one from another). kāṭhī ṭākaṇēṃ To throw up his mahārakī or office--a village-Mahar. kāṭhī ṭēkaṇēṃ To walk using a stick. kāṭhī śikharāsa lāgaṇēṃ (At jatras the flagstaffs of the several mānakarī are inclined against the pinnacle of the temple, in token of paying one's respects to the idol.) Hence To attain the object or aim of one's life, or of some earnest endeavors. 2 To be arrived at the close of earthly existence. kāṭhīnēṃ pāṇī śimpaṇēṃ (To sprinkle water with a stick.) To (expect to) perform a business or work by telling and charging others (whilst putting not one's own hand). kāṭhīnēṃ pāṇī śivaṇēṃ (To touch water with a stick.) To perform or do scantily, poorly, listlessly, reservedly &c. kāṭhīnēṃ pāṇī hāṭalēṃ tarīṃ dōna ṭhikāṇīṃ hōta nāhīṃ Expressive of a close and strong friendship or attachment. kāṭhīlā sōnēṃ bāndhūna cālāvēṃ Expressive of great security and safety. kāṭhīvara kāmbaḷā ghēṇēṃ or ghālaṇēṃ (To free one's body from the embarrassment of the kāmbaḷā; to strip.) To start up or stand out ready (to quarrel or for other evil work).

kāṭhī (काठी).—f The stalk, stem or trunk of a plant. Stick. A land measure. Stature, the frame or structure of the body. A staff or pole. kāṭhī ṭēṅkaṇēṃ Walk, using a stick.

1) Kaṭhī (कठी):—[from kaṭha] f. a female pupil or follower of Kaṭha [commentator or commentary] on [Pāṇini]

1) [noun] a long, slender piece of wood for walking with or beating; a stick.

2) [noun] an informal unit for measuring the area of a bounded region or a plane.

3) [noun] a stick, graduated or not, used in measuring the land-area.

Techniques (a): Collection and Processing of Material < [Chapter 4]

Verse 2.1.211 < [Chapter 1 - The Beginning of the Lord’s Manifestation and His Instructions on Kṛṣṇa-saṅkīrtana]

Chapter 271 - The different recensions of the Vedas (śākha)