Bhujanga means something in Buddhism, Pali, Hinduism, Sanskrit, Jainism, Prakrit, the history of ancient India, Marathi. If you want to know the exact meaning, history, etymology or English translation of this term then check out the descriptions on this page. Add your comment or reference to a book if you want to contribute to this summary article. 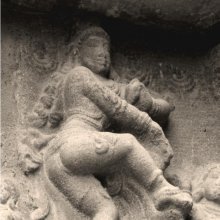 Bhujaṅga (भुजङ्ग).—Served as a rope for Manu to tie the divine boat to the horn of the fish;1 Indra took the guise of, to disturb the tapas of Vajrāngī;2 born to ward off poison.3

Bhujaṅga (भुजङ्ग) refers to a “serpent” and is used to describe Rāhu, according to the Bṛhatsaṃhitā (chapter 5), an encyclopedic Sanskrit work written by Varāhamihira mainly focusing on the science of ancient Indian astronomy astronomy (Jyotiṣa).—Accordingly, “Some say that Rāhu, the asura, though his head was cut, dies not but lives in the shape of a planet having tasted of ambrosia. That he has a disc like the sun and moon and as that disc is black it is invisible when in the sky except on the occasion of eclipses in virtue of a boon from Brahmā. Others say that he resembles a serpent [i.e., bhujaṅga] in shape with his head severed from his tail; a few that he is bodiless, that he is mere darkness and that he is the son of Siṃhikā. [...]”.

Bhujaṅga (भुजङ्ग) refers to a “snake”, according to the Cakrasaṃvara Samādhi [i.e., Cakrasamvara Meditation] ritual often performed in combination with the Cakrasaṃvara Samādhi, which refers to the primary pūjā and sādhanā practice of Newah Mahāyāna-Vajrayāna Buddhists in Nepal.—Accordingly, “Oṃ eat eat to the hanging garland of greasy bloody entrails, to Surābhakṣī Hūṃ Phaṭ Svāhā! Oṃ seize seize the snake (bhujaṅga) or serpent come forth from the seven underworlds Hūṃ Phaṭ Svāhā”.

[«previous (B) next»] — Bhujanga in Jainism glossary
Source: The University of Sydney: A study of the Twelve Reflections

Bhujaṅga (भुजङ्ग) refers to a “snake”, according to the 11th century Jñānārṇava, a treatise on Jain Yoga in roughly 2200 Sanskrit verses composed by Śubhacandra.—Accordingly, “The pleasures that are cherished, like the poison of a snake (bhujaṅga—bhogā bhujaṅgabhogābhāḥ), are the thieves of life immediately and they are produced in the cycle of rebirth by the 30 gods”.

Bhujaṅga.—(IA 20), an ogre. The word bhujaṅga was adopted in Javanese in the sense of a ‘pupil, disciple, scholar; a philologist, poet, literary councillor; an officially appointed professional usually residing at or near the court’. It has been suggested on this basis that Bhavadeva-bhaṭṭa's title Bālavalabhī-bhujaṅga may really mean ‘the pupil of the Bālavalabhī school’. See IHQ, Vol. XXVII, pp. 80-82. Note: bhujaṅga is defined in the “Indian epigraphical glossary” as it can be found on ancient inscriptions commonly written in Sanskrit, Prakrit or Dravidian languages.

[«previous (B) next»] — Bhujanga in Marathi glossary
Source: DDSA: The Molesworth Marathi and English Dictionary

bhujaṅga (भुजंग).—m (S) A snake. Applied popularly only to the nāga or Cobra de capello. 2 A term for a wencher or for one who keeps a mistress. 3 A term of praise for any competent, capable, powerful, or clever person. 4 Applied also to a fiery or fierce person.

[«previous (B) next»] — Bhujanga in Sanskrit glossary
Source: DDSA: The practical Sanskrit-English dictionary

3) A husband or lord in general.

5) The dissolute friend of a king.

4) [noun] a man who is observing religious austerities rigorously.

Verse 3.2.308 < [Chapter 2 - Description of the Lord’s Travel Through Bhuvaneśvara and Other Placesto Jagannātha Purī]