Photo 15 of 37 in Gallery: Vijayanagara Paintings 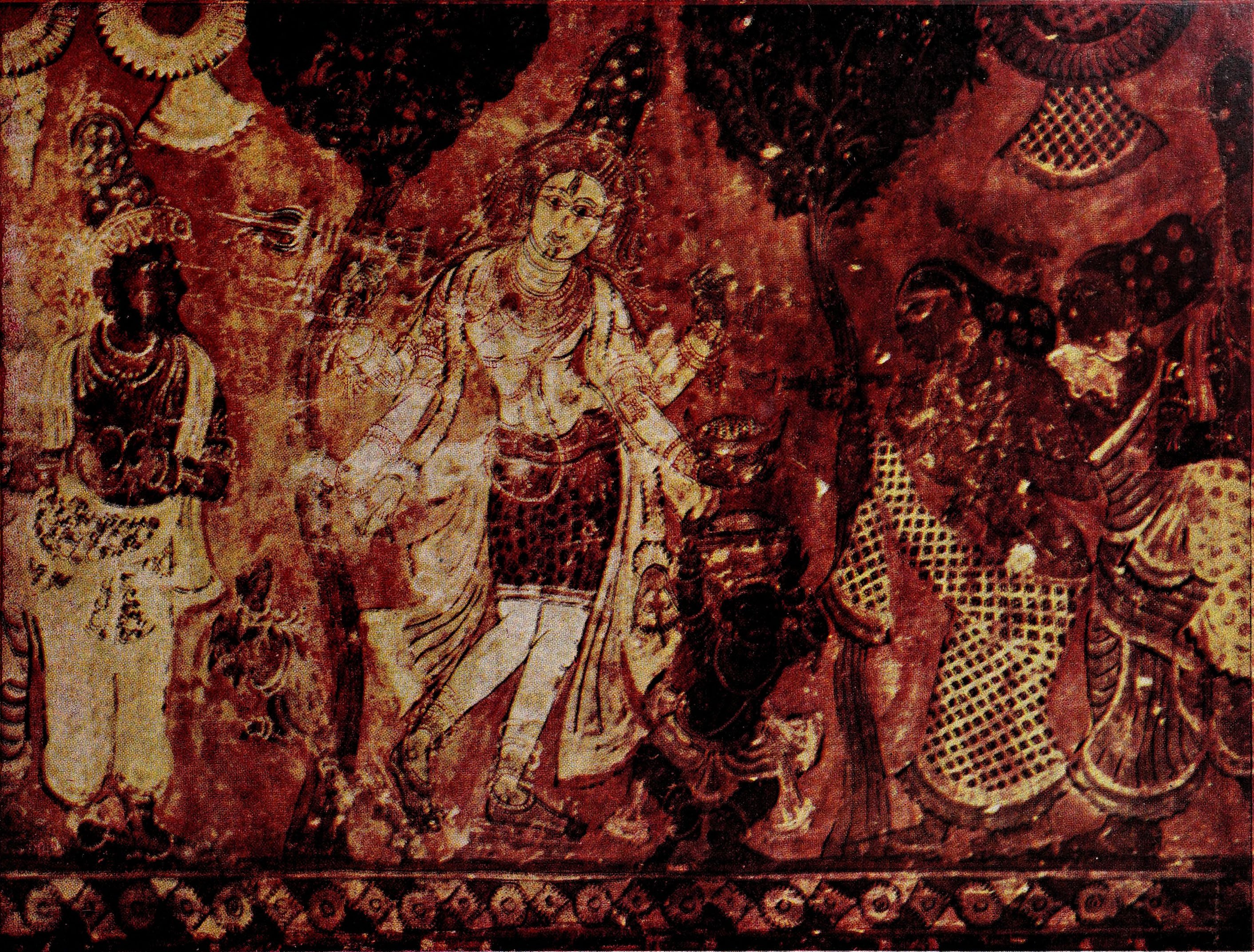 The next scene presents Bhikṣāṭana, the lovely beggar, on his march for alms, attended by a Gaṇa who carries his bowl on his head. He begged for alms and created passion in the breasts of even the wives of Ṛṣis, most austere women, who are showrn offering him food in a state of mind where intense passion, created by his singularly perfect beauty of form, gets the better of the usual calm ascetic attitude.

The pose of Bhikṣāṭana is as noble and majestic as that of the dwarf is quaint and comical. The painter has fully succeeded in his expressive touches that enhance the obviously beautiful form of the ladies by infusing life, palpitating with passion, in their breasts. The calm serenity in Bhikṣāṭana’s general bearing reveals the ability of the painter, who could indicate such contrast. Even the deer jumps in admiration of the master’s fascinating beauty. As one of the women empties a ladle of rice in the begging bowl, her mind is far from tranquil, and there are visible signs of her passion for the supremely beautiful beggar; the other woman is eagerly waiting to repeat what her companion has done.

Again, it is interesting here to compare the Bhikṣāṭana from one of the early Chola temples of Śrlīivāsanallur or from the temple of similar date and of similar workmanship from the Nāgeśvaraswāmi at Kumbakoṇam. Śiva as Bhikṣāṭana has been equally beautifully represented even in 100 A.D. in the Bṛhadīśvara temple at Tañjāvur where the main figure is in the niche and the women, offering him alms, on the walls of the niche. A whole group from the temple at Dārāsuram [Dārāsura] concentrates on this noble theme and the women with their garments slipping down their waist in their passion and the charm of their beauty is most wonderfully expressed, particularly in a pair from a long row of damsels, all assembled to feed the divine naked beggar. Removed from the temple at Dārāsuram, where it was originally, it is now in the Tañjāvur Art Gallery.