Tathagata means something in Buddhism, Pali, Hinduism, Sanskrit, Hindi. If you want to know the exact meaning, history, etymology or English translation of this term then check out the descriptions on this page. Add your comment or reference to a book if you want to contribute to this summary article.

Alternative spellings of this word include Tathagat. 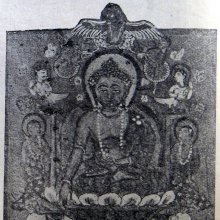 [«previous (T) next»] — Tathagata in Theravada glossary
Source: Access to Insight: A Glossary of Pali and Buddhist Terms

Tathagata, literally, “one who has truly gone (tatha gata)” or "one who has become authentic (tatha agata), an epithet used in ancient India for a person who has attained the highest spiritual goal. In Buddhism, it usually denotes the Buddha, although occasionally it also denotes any of his arahant disciples.

Tathagata:’An epithet of the Buddha, used by the Buddha in referring to himself. The Commentaries (DA.i.59-67; AA.i.58-63; MA.39-43; UdA.128ff., etc.) give eight (sometimes expanded to sixteen) explanations of the word, which shows that there was probably no fixed tradition on the point. The explanations indicate that the name can be used for any Arahant, and not necessarily only for a Buddha. The term was evidently pre-Buddhistic, though it has not yet been found in any pre-Buddhistic work.

Tathagata refers to the one who is enlightened, who has a perfect knowledge. The omniscient one. Buddha.

Tathagata (“the perfect one”), lit. the one who has “thus gone”, or “thus come”, is an epithet of the Buddha used by him when speaking of himself.

To the often asked questions, whether the Tathāgata still exists after death, or not, it is said (e.g. S. XXII, 85, 86) that, in the highest sense (paramattha, q.v.) the Tathāgata cannot, even at lifetime, be discovered, how much less after death, and that neither the 5 groups of existence (khandha, q.v.) are to be regarded as the Tathāgata, nor can the Tathāgata be found outside these corporeal and mental phenomena. The meaning intended here is that there exist only these ever-changing corporeal and mental phenomena, arising and vanishing from moment to moment, but no separate entity, no personality.

When the commentaries in this connection explain Tathāgata by 'living being' (satta), they mean to say that here the questioners are using the merely conventional expression, Tathāgata, in the sense of a really existing entity. Cf. anattā, paramattha, puggala, jīva, satta. A commentarial treatise on "The Meaning of the Word 'Tathāgata' " is included in The All-Embracing Net of Views (Brahmajāla Sutta), tr. Bhikkhu Bodhi (BPS).

Tathāgata (तथागत) is a synonym for the Buddha according to the 2nd century Mahāprajñāpāramitāśāstra (chapter IV).

1) He preaches the natures of the Dharmas (dharmalakṣaṇa) in the way (tathā) that he has understood (gata) them.

2) In the way that the previous Buddhas have gone by the path of safety (yogakṣema-mārga), thus (tathā) the actual Buddha is going (gata) and will not go on to new existences (punarbhāva).

Thus Come One [如来] (Skt, Pali tathagata; Jpn nyorai). One of the ten honorable titles of a Buddha, meaning one who has come from the realm of truth. This title indicates that a Buddha embodies the fundamental truth of all phenomena and has grasped the law of causality spanning past, present, and future. There are two opinions about the Sanskrit and Pali word tathagata. One view interprets it as a compound of tatha and agata, meaning "thus come one" and indicating one who has arrived from the realm of truth. This is the interpretation generally used in Chinese translations. The other interprets the word tathagata as the compound of tatha and gata, meaning "thus gone one" and indicating one who has gone to the world of enlightenment.

tathāgata : (adj.) one who has gone so; the Enlighten One.

Note: tathāgata is a Pali compound consisting of the words tathā and gata.

Tathāgata is a Sanskrit compound consisting of the terms tathā and gata (गत).

Tathāgata (तथागत).—[adjective] being in that condition, of such a quality or nature; [masculine] a Buddhist.

1) Tathāgata (तथागत):—[=tathā-gata] [from ta-thā > tat] mfn. being in such a state or condition, of such a quality or nature, [Ṛgveda-prātiśākhya iii, 5; Mahābhārata; Mālavikāgnimitra v, 9/10]

2) [v.s. ...] ‘he who comes and goes in the same way [as the Buddhas who preceded him]’, Gautama Buddha, [Buddhist literature; Sarvadarśana-saṃgraha]

Tathāgata (ತಥಾಗತ):—[adjective] being in a particular condition or state (referred to earlier).

2) [noun] a Buddha or Jaina mendicant.

3) [noun] any of the celebrated Jaina spiritual teachers.

Chapter 5 - On the Deduction of the Permanency of Tathagatahood

The Sutra of Queen Śrīmālā of the Lion’s Roar

Chapter V - The One Vehicle

Chapter XIV - The True Sons [and Daughters] of the Tathāgata

Chapter 34 - Visakha And Her Gifts

Chapter XI - On the Four Inversions < [Section One]

Chapter VIII - On the Four Dependables < [Section One]

Chapter XVII - On the Questions Raised by the Crowd < [Section Two]