Sela means something in Buddhism, Pali, Hinduism, Sanskrit, Marathi, Jainism, Prakrit, Hindi, biology. If you want to know the exact meaning, history, etymology or English translation of this term then check out the descriptions on this page. Add your comment or reference to a book if you want to contribute to this summary article. 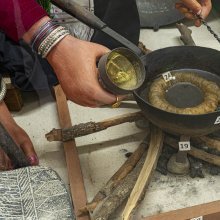 1. Sela. A king of long ago who, in spite of great sacrifices, could not get beyond the world of the Petas (Pitrs). J.vi.99.

2. Sela. A brahmin of Anguttarapa. He was a great friend of Keniya, the Jatila, and visited him when Keniya was making preparations to entertain the Buddha. Having heard the word Buddha from Keniya, Sela was filled with joy and fortitude, and went with his two hundred and fifty pupils to visit the Buddha in the woodland near Apana. There he observed on the person of the Buddha the thirty two marks of a Great Being all except two - viz., hidden privates and the long tongue. The Buddha read his thoughts and contrived, by his iddhi power, that Sela should be satisfied on these two points as well (This is referred to at Mil.167; DA.i.276, etc.). Sela then praised the Buddha in a series of verses and asked questions of him. At the end of his talk, Sela entered the Order with his pupils, and, at the end of a week, he attained arahantship (SN. p.104 ff. = M.ii.146f).

In the time of Padumuttara Buddha Sela had been the leader of the same guild of three hundred men, and, together with them, had built a parivena for the Buddha and done many good acts. As a result of these they received the ehi Bhikkhu pabbajja in this last life (SNA.ii.455; MA.ii.782; see also Ap.i.316; Thag.vs.818-41; Th4gA.ii.47f).

Mahasela, mentioned as the teacher of Sugandha Thera (ThagA.i.80f), is probably identical with this Sela. Sela lived to the age of one hundred and twenty (DA.ii.413).

According to the Dhammapada Commentary (DhA.i.384; also AA.i.219), the Buddha first met Sela on his way to Bhaddiya to convert Visakha and her kinswomen. Visakha was then seven years old. The Apadana says (Ap.i.318) that Selas father was a wealthy brahmin, named Vasettha.

2. Sela Theri. She was born in Alavi as daughter of the king: therefore she was also called Alavika. When she was still unmarried the Buddha visited Alavi with Alavaka, whom he had converted, carrying his begging bowl and robe. On that occasion Sela went with her father to hear the Buddha preach. She became a lay disciple, but later, agitated in mind, she joined the Order and became an arahant. After that she lived in Savatthi. One day, as she was enjoying her siesta in the Andhavana under a tree, Mara, in the guise of a stranger, approached her and tried to tempt her. But she refuted his statements regarding the attractions of lay life, and Mara had to retire discomfited (S.i.134; Thig.vss.57-9).

śēlā (शेला).—m ( H) A sort of scarf, a cloth composed of four breadths depending from the shoulders loosely over the body. Pr. sarakāracēṃ tēla śēlyāvara ghyāvēṃ Accept the gifts or honors of the great at whatever damage or cost.

śēḷa (शेळ).—f R or C Rice-land which retains humidity and coolness during the hot season. 2 Rice-plants raised from seed on such land (in preparation for transplantation with the earliest showers of the monsoon). śēḷīcā taravā Humid rice-land prepared by burning to be the seedbed of rice: also the produce or growth upon it.

1) Sela (सेल) in the Prakrit language is related to the Sanskrit word: Śaila.

Chapter 17 - Different Aspects Of The 24 Conditions