Manthara means something in Hinduism, Sanskrit, Buddhism, Pali, Jainism, Prakrit. If you want to know the exact meaning, history, etymology or English translation of this term then check out the descriptions on this page. Add your comment or reference to a book if you want to contribute to this summary article. 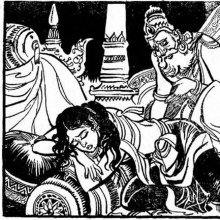 1) Mantharā (मन्थरा).—A maid of Kaikeyī the wife of Daśaratha. This hunchbacked woman was born of the species of a Gandharvī named Dundubhī. (Śloka 10, Chapter 276, Vana Parva). When everything was made ready to crown Śrī Rāma as the heir-apparent of Ayodhyā, it was Mantharā who persuaded Kaikeyī to go to Daśaratha and ask him to send Śrī Rāma to the forests. Had not the cruel tongue of Mantharā played like that, the history of the solar dynasty itself would have been different. (See under Kaikeyī).

Manthara was the house-maid of Kaikeyi, the queen of King Dasharatha. She had lived with the queen since her birth. The King had decided to make Rama, his eldest son (by his eldest wife Kausalya) as his heir-apparent, and Kaikeyi was glad at this news like everyone in the kingdom.

However, Manthara gave her evil advice, pointing out to her that she and her son Bharata would be second-class citizens henceforth. Acting on this advice, relying upon a boon that her husband had promised her, Kaikeyi got her son Bharata crowned as the heir instead, and got Rama exiled to the forest for fourteen years. Unable, to bear the thought of separation from his son, Dasharatha died of grief.

Mantharā (मंथरा): Mantharā was a servant who convinced Kaikeyi that the throne of Ayodhya belonged to her son Bharata and that Rama should be exiled from the kingdom.

-rā Name of a humpbacked nurse or slave of Kaikeyī who instigated her mistress, on the eve of Rāma's coronation as heir-apparent, to beg of her husband by the two boons formerly promised to her by him, the banishment of Rāma for fourteen years and the installation of Bharata on the throne; मन्थरां प्रविशस्वादौ कैकेयीं च ततः परम् (mantharāṃ praviśasvādau kaikeyīṃ ca tataḥ param) A. Rām.

3) [adjective] depressed below the surrounding surface or normal elevation.