Lakshminarasimha means something in Hinduism, Sanskrit. If you want to know the exact meaning, history, etymology or English translation of this term then check out the descriptions on this page. Add your comment or reference to a book if you want to contribute to this summary article.

The Sanskrit term Lakṣmīnarasiṃha can be transliterated into English as Laksminarasimha or Lakshminarasimha, using the IAST transliteration scheme (?). 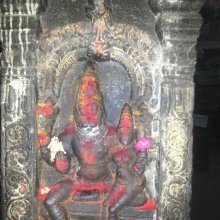 Lakṣmīnarasiṃha (लक्ष्मीनरसिंह) is short for Lakṣmī, one of the aspects of nṛsiṃha (‘man-lion’), according to the Vihagendra-saṃhitā 4.17. Nṛsiṃha is a Tantric deity and refers to the furious (ugra) incarnation of Viṣṇu. The Vihagendra-saṃhīta is a Sanskrit work from the 15th century and deals primarely with meditation on mantras and sacrificial oblations.