Dipankara means something in Buddhism, Pali, Hinduism, Sanskrit. If you want to know the exact meaning, history, etymology or English translation of this term then check out the descriptions on this page. Add your comment or reference to a book if you want to contribute to this summary article. 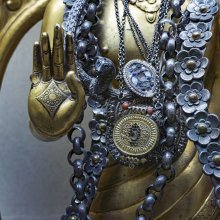 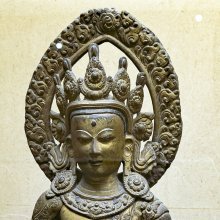 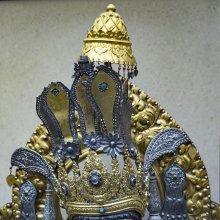 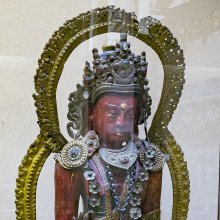 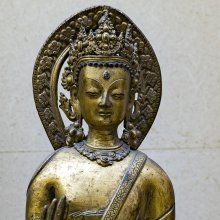 Dīpaṃkara (दीपंकर) is the name of a Buddha according to the 2nd century Mahāprajñāpāramitāśāstra (chapter XV).—Accordingly, “The Buddha Dīpaṃkara was called Dīpaṃkarakumāra, “prince, lighter of lamps” because when he was born, all the extremities of his body were like lamps. When he became Buddha, he was still called Dīpaṃkara”.

According to Chapter LI, “for twelve years after he had attained abhisaṃbodhi, the Buddha Jan-teng (Dīpaṃkara) only emitted light rays (raśmi) and, as there was no one to understand him, did not preach the Dharma”.

The first of the twenty four Buddhas.

He was born in Rammavati,

his father being King Sudeva (v.l. Sumedha) and

For ten thousand years he lived in the household, in three palaces, Hamsa, Konca and Mayura.

He left home on an elephant and practised austerities for ten months.

His Bodhi tree was the Pipphali and grass for his seat was given by an Ajivaka named Sunanda.

His first sermon was preached at Nandarama (Sunandarama) at Sirighara, where he converted the heretics.

He had three great gatherings of his followers.

He was always attended by eighty four thousand arahants, and his body was eighty cubits in height.

He died at Nandarama at the age of one hundred thousand years and his thupa was thirty six yojanas high.

Sumangala and Tissa were his chief monks,

Nanda and Sunanda his chief nuns, while

Tapassu and Bhallika were his chief lay patrons among men and Sirima and Sona among women.

It was during the time of Dipankara Buddha that the ascetic Sumedha (q.v.), who later became Gotama - Buddha, first declared his intention of becoming an aspirant for Enlightenment (a Bodhisatta).

Dīpaṃkara (दीपंकर) is the name of a Tathāgata (Buddha) mentioned as attending the teachings in the 6th century Mañjuśrīmūlakalpa: one of the largest Kriyā Tantras devoted to Mañjuśrī (the Bodhisattva of wisdom) representing an encyclopedia of knowledge primarily concerned with ritualistic elements in Buddhism. The teachings in this text originate from Mañjuśrī and were taught to and by Buddha Śākyamuni in the presence of a large audience (including Dīpaṃkara).

Dipankara one of the Buddhas of the past, said to have lived on Earth one hundred thousand years.

Theoretically, the number of Buddhas having existed is enormous and they are often collectively known under the name of "Thousand Buddhas". Each was responsible for a life cycle. According to some Buddhist traditions, Dipankara (also Dipamkara) was a Buddha who reached enlightenment eons prior to Shakyamuni, the historical Buddha. Generally, Buddhists believe that there has been a succession of many Buddhas in the distant past and that many more will appear in the future; Dipankara, then, would be one of numerous previous Buddhas, while Shakyamuni was the most recent, and Maitreya will be the next Buddha in the future.

dīpaṅkara : (adj.) one who lights a lamp; name of the former Buddha.

1) [noun] he who gives light or who enlightens.

A Brief Outline of Buddhism (by U Po Sa)

I. Becoming buddha and preaching the dharma the same day < [Part 13 - Carrying out abhisaṃbodhi, preaching and conversions all in the same day]

2. Actions producing the thirty-two marks (dvātriṃśallakṣaṇa) < [Part 4 - The Bodhisattva in the Abhidharma system]