Toya means something in Hinduism, Sanskrit, Buddhism, Pali, Marathi, Jainism, Prakrit, Hindi, biology. If you want to know the exact meaning, history, etymology or English translation of this term then check out the descriptions on this page. Add your comment or reference to a book if you want to contribute to this summary article.

Alternative spellings of this word include Toy. 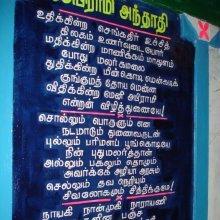 Toyā (तोया).—Name of a river originating from Vindhya, a holy mountain (kulaparvata) in Bhārata, according to the Varāhapurāṇa chapter 85. There are settlements (janapada) where Āryas and Mlecchas dwell who drink water from these rivers.

Toya (तोय) is another name for “Hrībera” and is dealt with in the 15th-century Yogasārasaṅgraha (Yogasara-saṅgraha) by Vāsudeva: an unpublished Keralite work representing an Ayurvedic compendium of medicinal recipes. The Yogasārasaṃgraha [mentioning toya] deals with entire recipes in the route of administration, and thus deals with the knowledge of pharmacy (bhaiṣajya-kalpanā) which is a branch of pharmacology (dravyaguṇa).

Toya (तोय) refers to “water” and is used in the various Anupāna (“drink take”), according to sections on the treatment of Horses (Gajāyurveda or Aśvāyurveda) in the Garuḍapurāṇa.—The Anupāna i.e. the drink take along with or after medicine was important in treatment. Because it may help in carrying, absorption, assimilation and enhancing action of the drugs. Normally the selection of anupāna is done depends upon disease, doṣa etc.—[...] In diseases of the deranged and aggravated vāyu the medicine should be administered through the taila (oil), or in combination with śarkarā (sugar), ājya/ghṛita (ghee) or toya (water).

Toya (तोय) refers to “water”, according to the Bṛhatsaṃhitā (chapter 5), an encyclopedic Sanskrit work written by Varāhamihira mainly focusing on the science of ancient Indian astronomy astronomy (Jyotiṣa).—Accordingly, “If the solar or lunar disc should be just dimmed by darkness all round which disappears immediately, the eclipse is technically known as Leha (licking): all creatures will be happy and the earth will be flooded with water [i.e., toya]. If a third, or a fourth, or one half of the disc should be eclipsed, it is technically known as Grasana (seizing with the mouth) grasa—partial eclipse: the wealth of prosperous princes will suffer diminution and prosperous countries will be afflicted with calamities”.

Toya (तोय) or Toyatattva refers to the “water principle”, according to the Manthānabhairavatantra, a vast sprawling work that belongs to a corpus of Tantric texts concerned with the worship of the goddess Kubjikā.—Accordingly, “(Kubjikā) is the colour of (dark) blue collyrium. [...] The lotus, which is the eight-fold creation, should be imagined on the ghost. The Earth principle is in (the Wheel) of the Self-supported. One should think that Water [i.e., toya] is in (her) navel and Fire in the centre of the heart. One should imagine that Wind is in (her) throat and Space on (her) forehead. All (the elements) are located in these (places). Thousands of millions of Kulas are part of the Kula tradition. The teaching concerning (the goddess’s) body is hard to acquire even by the gods.”.

2) The constellation पूर्वाषाढा (pūrvāṣāḍhā) or its regent.

Toya (तोय) in the Sanskrit language is related to the Prakrit word: Toya.

1) Toya (तोय) in the Prakrit language is related to the Sanskrit word: Toya.

Tōya (ತೋಯ):—[noun] a dish made of pulses and sometimes with vegetables.

Search found 16 books and stories containing Toya, Toyā, Tōya; (plurals include: Toyas, Toyās, Tōyas). You can also click to the full overview containing English textual excerpts. Below are direct links for the most relevant articles: