Nandimandapa means something in Hinduism, Sanskrit, the history of ancient India. If you want to know the exact meaning, history, etymology or English translation of this term then check out the descriptions on this page. Add your comment or reference to a book if you want to contribute to this summary article. 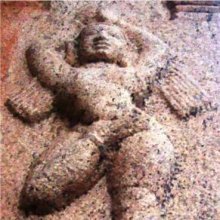 Nandimaṇḍapa (नन्दिमण्डप) refers to type of Vāhanamaṇḍapa, which is a pavilion built for the presiding deity’s mount. The nandimaṇḍapas are always open pavilions.

Nandimaṇḍapa (नन्दिमण्डप).—A type of vāhanamaṇḍapa;—The nandimaṇḍapas are always open pavilions. The canopy of the pavilion is erected over four pillars placed at the four comers of the plinth (adhiṣṭhāna). These pillars are decorated according to the order and style of the pillars of the period. Pillars support the corbels above which the prastara is found, prastara consists of valabhi, kapota and vājana.

Nandimaṇḍapa (नन्दिमण्डप) in the Lokeśvara is built in the form of a highly elevated pavilion and it faces west that is Lokeśvara Liṅga in the sanctum. It has openings on all four sides but the access is only to the west. There is a flight of steps to reach Nandin housed in the centre of the maṇḍapa. Walls on all four sides are cut regularly in the centre in order to have the view of the Nandin from any side. On the walls there are elegantly carved female figures and couples. On each façade we see two couples standing on either side of the opening and two niches in which a single female figure is represented. In the centre of the maṇḍapa is a very handsomely carved image of a huge couchant Nandin installed facing the Lokeśvara Liṅga. Nandin is very beautiful and is decorated with bells and other usual necklaces. His muzzle is turned towards a little to the north in order to have the view of his Lord without any interruption.

Nandimaṇḍapa (नन्दिमण्डप).—All temples on the site of Pattadakal are dedicated to God Śiva. In each temple wherever a Liṅga is installed there must be a Nandin, the vehicle of Śiva; this is the rule. Unfortunately, almost all the Nandimaṇḍapa of temples on the site of Pattadakal are dilapidated except the one in the Lokeśvara and the statue of Nandin in the Pāpanātha temple. Trailokyeśvara and Vijayeśvara had also a special shrine for Nandin but the one in the former is damaged and in the latter it has disappeared without leaving any trace of its existence in the past.