Chinmudra means something in Hinduism, Sanskrit. If you want to know the exact meaning, history, etymology or English translation of this term then check out the descriptions on this page. Add your comment or reference to a book if you want to contribute to this summary article.

Alternative spellings of this word include Chhinmudra. 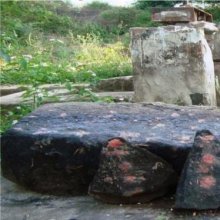 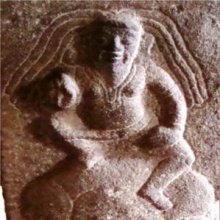 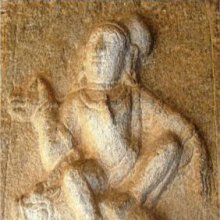 Chin Mudra (“The Gesture of Teaching”):—This mudra indicates that God is the Supreme Guru and repeatedly takes birth in order to teach us the Dharma. In the Incarnation of Krishna he taught the Bhagavad Gita.

Chin Mudra (psychic gesture of consciousness) This mudra is used in either seated meditation or pranayama such as ujjayi. The hands rest on knees or thighs facing down. This Gesture has a grounding effect on the mind.The middle finger, ring, and little finger represent the three classic qualities of all of nature (the Three Gunas). The middle finger symbolizes sattva, (purity, wisdom and true understanding) the ring finger rajas, (action, passion and movement) and the little finger tamas, (inertia, lethargy and darkness). Classically the yogi is meant to transcend these states, progressing from darkness into light and from ignorance to wisdom.

In the Chinmudrā (छिन्मुद्रा), the tips of the thumb and the forefinger are made to touch each other, so as to form a circle, the other fingers being kept open. The palm of the hand is made to face the front. This is the mudrā adopted when an explanation or exposition is being give; hence it is also called vyākhyānamudrā and sandarśanamudrā.

Chin Mudra — the gesture of teaching — palm displayed, fingers upwards thumb and fore-finger joined at the tips. This indicates the imparting of knowledge, form the deity to the contemplator and having received the knowledge the aspirant is expected to pass it on to others. The thumb pressing on the index finger indicates suppression of egoism, the 3 upraised fingers indicate overcoming self-referent desire, anger and greed.