Dhyanamudra means something in Buddhism, Pali, Hinduism, Sanskrit, Marathi. If you want to know the exact meaning, history, etymology or English translation of this term then check out the descriptions on this page. Add your comment or reference to a book if you want to contribute to this summary article. 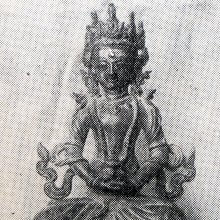 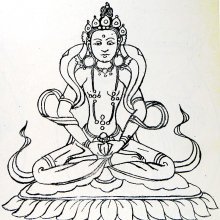 Dhyānamudrā (ध्यानमुद्रा) is a Sanskrit word referring to “the gesture of meditation”. The term mudrā translates to “hand seal”.

Source: Google Books: The Book of Hindu Imagery: Gods, Manifestations and Their Meaning

Dhyana(-mudra)—The god sits in a position meditation and places the right hand inside the left hand in the lap with the palms turned up. This position, also known as yogamudra, indicates a condition of deep meditation.

Dhyana Mudra — the gesture of meditation, this takes two forms: palms placed one over the other in the lap or arms stretched out, hands on the knees with the palms outward displaying the chin mudra. The former indicates meditation using an abstract or formless focus, and the later expresses the idea of meditation upon a more tangible object.

The Dhyana mudra may be made with one or both hands. When made with a single hand the left one is placed in the lap, while the right may be engaged elsewhere. The left hand making the Dhyana mudra in such cases symbolizes the female left-hand principle of wisdom. Ritual objects such as a text, or more commonly an alms bowl symbolizing renunciation, may be placed in the open palm of this left hand.

When made with both hands, the hands are generally held at the level of the stomach or on the thighs. The right hand is placed above the left, with the palms facing upwards, and the fingers extended. In some cases the thumbs of the two hands may touch at the tips, thus forming a mystic triangle. The esoteric sects obviously attribute to this triangle a multitude of meanings, the most important being the identification with the mystic fire that consumes all impurities. This triangle is also said to represent the Three Jewels of Buddhism, mentioned above, namely the Buddha himself, the Good Law and the Sangha.

The Dhyana mudra is the mudra of meditation, of concentration on the Good law, and of the attainment of spiritual perfection. According to tradition, this mudra derives from the one assumed by the Buddha when meditating under the pipal tree before his Enlightenment. This gesture was also adopted since time immemorial, by yogis during their meditation and concentration exercises. It indicates the perfect balance of thought, rest of the senses, and tranquillity.

This mudra is displayed by the fourth Dhyani Buddha Amitabha, also known as Amitayus. By meditating on him, the delusion of attachment becomes the wisdom of discernment. The Dhyana mudra helps mortals achieve this transformation.

dhyānamudrā (ध्यानमुद्रा).—f (S) The prescribed attitude in which to meditate upon the deity. Hence 2 The look or air of abstraction.

dhyānamudrā (ध्यानमुद्रा).—f The prescribed attitude in which to meditate upon the deity. The look or air of abstraction.

Dhyānamudrā (ध्यानमुद्रा).—a prescribed attitude in which to meditate on a deity.

Dhyānamudrā is a Sanskrit compound consisting of the terms dhyāna and mudrā (मुद्रा).

Dhyānamudrā (ध्यानमुद्रा):—[=dhyāna-mudrā] [from dhyāna > dhyai] f. a prescribed attitude in which to meditate on a deity, [ib.]