Cintamani means something in Buddhism, Pali, Hinduism, Sanskrit, Marathi. If you want to know the exact meaning, history, etymology or English translation of this term then check out the descriptions on this page. Add your comment or reference to a book if you want to contribute to this summary article.

Alternative spellings of this word include Chintamani. 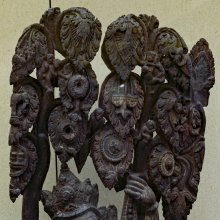 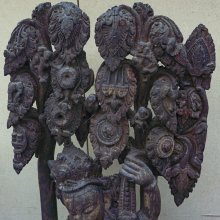 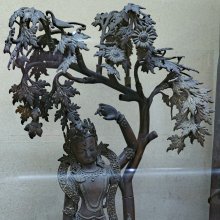 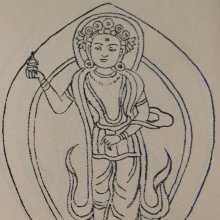 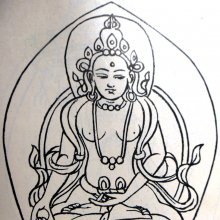 Cintāmaṇi (Wish-fulfilling gem) - Represents the mind, the precious jewel of the perfected mind in which all wishes and aims are accomplished.

Cintāmaṇi (चिन्तामणि, “taker of worries”) refers to one of the fifty-six vināyakas located at Kāśī (Vārāṇasī), and forms part of a sacred pilgrimage (yātrā), described in the Kāśīkhaṇḍa (Skanda-purāṇa 4.2.57). He is also known as Cintāmaṇivināyaka, Cintāmaṇigaṇeśa and Cintāmaṇivighneśa. These fifty-six vināyakas are positioned at the eight cardinal points in seven concentric circles (8x7). They center around a deity named Ḍhuṇḍhirāja (or Ḍhuṇḍhi-vināyaka) positioned near the Viśvanātha temple, which lies at the heart of Kāśī, near the Gaṅges. This arrangement symbolises the interconnecting relationship of the macrocosmos, the mesocosmos and the microcosmos.

Cintāmaṇi, and the other vināyakas, are described in the Skandapurāṇa (the largest of the eighteen mahāpurāṇas). This book narrates the details and legends surrounding numerous holy pilgrimages (tīrtha-māhātmya) throughout India. It is composed of over 81,000 metrical verses with the core text dating from the before the 4th-century CE.

1) Cintāmaṇi (चिन्तामणि) or Cintāmaṇi Daivajña (17th century) alias Cintāmaṇi Jyotirvid, composer of Prastāracintāmaṇi and other texts, was the son of Govinda Jyotirvid of Śivapura of Gārgyagotra and a contemporary of Shah Jehan. He was the grandson of Nīlakaṇṭha and great grandson of Ananta. Cintāmaṇi mentions about the scholarship of his ancestors and himself in the end of his commentary on Vṛttaratnākara. He says: “His grandfather Nīlakaṇṭha was well versed in all śāstras and resided in Vārāṇasī, his father Govinda was praised by the kings and well versed in Astrology. Then he tells about himself that he was scholar with numerous credibility as he was an excellent commentator (vyākhyānavidvattama), exponent in literature, knower of jyotiṣa”.

2) Cintāmaṇi (चिन्तामणि) (19th century), son of Jīva, and the chief court astrologer in the princely state of Kohlāpur; now in Mahārāṣṭra composed a text on prosody namely Chandaḥsāra. He belongs to Śāṇḍilyagotra. He flourished during the reign of King Sāhuji, son of Śivajī and fifth descendant of Śivājī in Kohlāpur. He was well versed in logic, literature, etc. He mentions about this in the beginning of his work Śyāmalābhāṇa, which was composed during the reign of Sāhujī.

Cintāmaṇi (चिन्तामणि) is the name of an Ayurvedic recipe defined in the fourth volume of the Rasajalanidhi (chapter 2, dealing with jvara: fever). These remedies are classified as Iatrochemistry and form part of the ancient Indian science known as Rasaśāstra (medical alchemy). However, as an ayurveda treatment, it should be taken twith caution and in accordance with rules laid down in the texts.

Accordingly, when using such recipes (e.g., cintāmaṇi-rasa): “the minerals (uparasa), poisons (viṣa), and other drugs (except herbs), referred to as ingredients of medicines, are to be duly purified and incinerated, as the case may be, in accordance with the processes laid out in the texts.” (see introduction to Iatro chemical medicines)

1. Cintamani, Cintamanika - The name of a Vijja, whereby the thoughts of others can be read by observing them. DA.ii.389; AA.i.399.

2. Cintamani - Wife of the Treasurer Gandha. When Bhattabhatika had fulfilled his contract with Gandha, the latter ordered that all the members of his household, with the exception of Cintamani, should wait on Bhattabhatika. DhA.iii.90.

Cintāmaṇi (चिन्तामणि) refers to a type of jewel (ratna), into which the universe was transformed by the Buddha’s miraculous power (ṛddhibala) according to the 2nd century Mahāprajñāpāramitāśāstra (chapter XV). Accordingly, “The cintāmaṇi comes from the Buddha’s relics (buddhaśarīra); when the Dharma will have disappeared, all the Buddha’s relics will change into cintāmani. Similarly, at the end of a thousand years, water will change into crystal (sphoṭika, sphaṭika) pearls”.

Note: these are precious stone that grants all the wishes of its owner.

1) Cintāmaṇi (चिन्तामणि) refers to the “wishing Gem” and represents one of the five Kulas (families), according to Guhyasamāja.—[...] The families (kula) owe allegiance to their progenitors who are known as Kuleśas or Lords of Families. In the Guhyasamāja it is said: “The five Kulas (families) are the Dveṣa (hatred), Moha (delusion), Rāga (attachment), Cintāmaṇi (Wishing Gem), and Samaya, (convention) which conduce to the attainment of all desires and emancipation”.

“Cintāmaṇi is also similar to [Piṇḍapātra Lokeśvara], except that here he carries the Caitya in his right hand while the empty left is held near his navel.—Piṇḍapātra Lokeśvara is one-faced and two-armed and stands on a lotus. He holds the Piṇḍapātra (the bowl) in his two hands near the navel”.

The names of the 108 deities [viz., Cintāmaṇi] possbily originate from a Tantra included in the Kagyur which is named “the 108 names of Avalokiteshvara”, however it is not yet certain that this is the source for the Nepali descriptions.

Cintamani (S.) Lit. “magic gem”, which satisfies all desires (v. Mani). It is the special symbol of Kshitigarbha, Samantabhadra, Ratnapani, Ratnasambhava, and Mahakala, as well as of Jizo and the six-armed Nyo-i-rin Kwan-non. Avalokitesvara may also carry it, but rarely, and it is the accessory symbol of several other gods. The cintamani is represented in several different ways.

The mani, or jewels, may be nine in number, in which case they represent the nava ratna, or the nine jewels borrowed from Brahmanism. Or they may represent the sapta raffia, or seven precious jewels, much considered in Tibet and China (v. ratna). The mani may also be six, or only three in number (more frequent in Japan), representing the tri-ratna, Buddha, Dharma, Sangha.

Cintāmaṇi refers to: the jewel of thought, the true philosopher’s stone VvA.32; N. of a science J.III, 504;

cintāmaṇi (चिंतामणि).—A gem of svarga supposed to yield to its possessor everything wanted; a name of gaṇapati.

(-ṇiḥ) 1. A fabulous gem, supposed to yield its possessor whatever may be required. 2. A name of Brahma. 3. A Jina or Jaina saint. E. cintā, reflexion, and maṇi a jewel.

Cintāmaṇi (चिन्तामणि).—[masculine] the gem of thought ( = the philosopher’s stone); T. of [several] works.

Cintāmaṇi (चिन्तामणि):—[cintā-maṇi] (ṇiḥ) 2. m. A fabulous gem supposed to confer every thing that may be desired; Brahmā.

1) [noun] a celestial gem that is believed to grant all wishes.

3) [noun] (fig.) a man who concedes all requests of another or others.

Chapter 36 - The Inner Chamber of Cintāmaṇi