Vyakhyanamudra means something in Hinduism, Sanskrit. If you want to know the exact meaning, history, etymology or English translation of this term then check out the descriptions on this page. Add your comment or reference to a book if you want to contribute to this summary article. 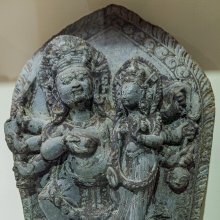 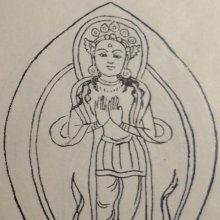 Vyākhyānamudrā (व्याख्यानमुद्रा) is a Sanskrit word referring to “the gesture of teaching”. The term mudrā translates to “hand seal”.

The Vyākhyānamudrā (व्याख्यानमुद्रा) is another name for the Chinmudrā, which is used when an explanation or exposition is presented.

Vyākhyānamudrā (व्याख्यानमुद्रा) or simply Vyākhyāna refers to “essence, exposition of truth” and represents one of the twenty-four gestures with a single hand, as defined according to texts dealing with śilpa (arts and crafs), known as śilpaśāstras.—Accordingly, pratimā-lakṣaṇa (body postures of the icons) is comprised of hand gestures (hasta, mudrā or kai-amaiti), stances/poses (āsanas) and inflexions of the body (bhaṅgas). There are thirty-two types of hands [viz., vyākhyānamudrā] classified into two major groups known as tolirkai (functional and expressive gestures) and elirkai (graceful posture of the hand).

(Description of Vyākhyāna-mudrā): The thumb is held perpendicular to the palm and the index finger is bent forward to touch the tip of the thumb. The remaining three fingers are held close together vertically above the palm. It is known variously as vyakhyana, vitarka or cin-mudrā. Rao remarks about it that it is the “mudrā adopted when an explanation or exposition is being given; hence it is also called vyākhyāna-mudrā and sandarśana-mudrā.”