Vessantara Jataka means something in Buddhism, Pali. If you want to know the exact meaning, history, etymology or English translation of this term then check out the descriptions on this page. Add your comment or reference to a book if you want to contribute to this summary article. 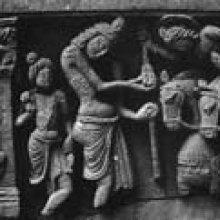 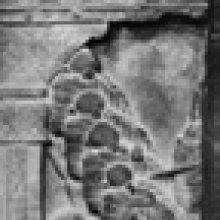 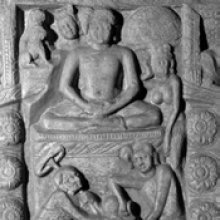 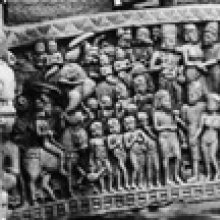 Vessantara (the Bodhisatta) was the son of Sanjaya, king of Sivi, and queen Phusati, and was so called because his mother started in labour as she passed through the vessa street in the city of Jetuttara, and he was born in a house in the same street. He spoke as soon as he was born (Cf. BuA.228). On the same day was also born a white elephant named Paccaya. At the age of eight, Vessantara wished to make a great gift and the earth trembled. He married Maddi at the age of sixteen, and their children were Jali and Kanhajina.

At that time there was a great drought in Kalinga, and eight brahmins came from there to Vessantara to beg his white elephant, which had the power of making rain to fall. He granted their request, and gave the elephant together with its priceless trappings (J.vi.488f. gives the details of these). The citizens of Jetuttara were greatly upset that their elephant should have been given away, and demanded of Sanjaya that Vessantara should be banished to Vankagiri. The will of the people prevailed, and Vessantara was asked to take the road along which those travel who have offended. He agreed to go, but before setting out, obtained the kings leave to hold an almsgiving called the Gift of the Seven Hundreds (Sattasataka), in which he gave away seven hundred of each kind of thing. People came from all over Jambudipa to accept his gifts, and the almsgiving lasted for a whole day.

When Vessantara took leave of his parents and prepared for his journey, Maddi insisted on accompanying him with her two children. They were conveyed in a gorgeous carriage drawn by four horses, but, outside the city, Vessantara met four brahmins who begged his horses. Four devas then drew the chariot, but another brahmin soon appeared and obtained the chariot. Thenceforward they travelled on foot, through Suvannagiritala, across the river Kantimara, to beyond Mount Aranjaragiri and Dunnivittha, to his uncles city, in the kingdom of Ceta. The devas shortened the way for them, and the trees lowered their fruit that they might eat. Sixty thousand khattiyas came out to welcome Vessantara and offered him their kingdom, which, however, he refused. He would not even enter the city, but remained outside the gates, and, when he left early the next morning, the people of Ceta, led by Cetaputta, went with him for fifteen leagues, till they came to the entrance to the forest. Vessantara and his family then proceeded to Gandhamadana, northwards, by the foot of Mount Vipula to the river Ketumati, where a forester entertained them and gave them to eat. Thence they crossed the river to beyond Nalika, along the bank of Lake Mucalinda, to its north eastern corner, then along a narrow footpath into the dense forest, to Vankagiri. There Vissakamma had already built two hermitages, by order of Sakka, one for Vessantara and one for Maddi and the children,

Chapter 4f - Invasion of the Tamils

(1) First Pāramī: The Perfection of Generosity (dāna-pāramī) < [Chapter 6 - On Pāramitā]