Pattu means something in Hinduism, Sanskrit, Marathi, Hindi, biology. If you want to know the exact meaning, history, etymology or English translation of this term then check out the descriptions on this page. Add your comment or reference to a book if you want to contribute to this summary article. 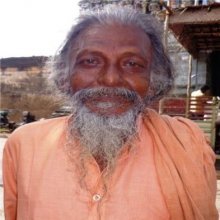 Pattu (पत्तु).—(ten) A) The ten books on rhetorics. (Alaṅkāragranthas). (See full article at Story of Pattu from the Puranic encyclopaedia by Vettam Mani)

2) [noun] the quality of being tenacious; tenacity.

3) [noun] the quality or state of being unreasonably determined to have one’s own way, without yielding to reason or plea.

4) [noun] a medical substance applied on wounds, swollen part of the body etc.

8) [noun] a particular mode of fighting in wrestling or sword-fighting.

9) [noun] a number of persons classified together because of common characteristics, community of interests, etc.; a group; a faction.

12) [noun] the regulated closing (fullly or partially) of the holes of a flute, to produce right notes.

1) [noun] any one of a series of moments at which the same or nearly the same thing recurs; time.

2) [noun] the number to indicate how many times a quantity is more than another quantity.

2) [verb] to join (oneself with); to be associated with; to join with.

4) [verb] to become fit; to conform suitably with.

6) [verb] to come into physical contact with; to touch.

8) [verb] to spread oneself widely.

16) [verb] (an evil spirit, etc.) to possess a person and influence his behaviour, action, etc.

17) [verb] to follow or observe (a religion or religious practice).

19) [verb] to take (another person) into arms and press to the bosom as to express one’s affection, love, appreciation, etc.

21) [verb] to form a wrinkle or wrinkles in, as by contracting.

24) [verb] to bend or incline the body so as to rest part of one’s weight upon or against something; to lean on.

34) [verb] to have sexual intercourse.

1) [noun] the act associating or being associated.

2) [noun] the fact of being associated with; association.

3) [noun] the connection or manner of being connected or related; relation.

4) [noun] a place of protection; shelter.

5) [noun] a physical combat (as between two hostile armed force); a battle.

2) [noun] the time or period during which something happens; the period between two events.

3) [noun] the point of time when delivering of the child is due (said in relation to a pregnant woman).

4) [noun] number of times or the frequencies the same thing recurs; number of repeated occasions.

1) [noun] reliance on the integrity, strength, ability, surety, etc., of a person or thing; confidence; trust.

Pattu (ಪತ್ತು):—[noun] a resinous wood twisted at one end with long band of cloth soaked with tallow or other inflammable substances, that is lighted for using as a portable light or for holding as a symbol of respect or devotion; a torch.

Twin Texts: The Canonization of the Tiruviḷaiyāṭal Purāṇam < [Chapter 4 - The Language Games of Śiva]