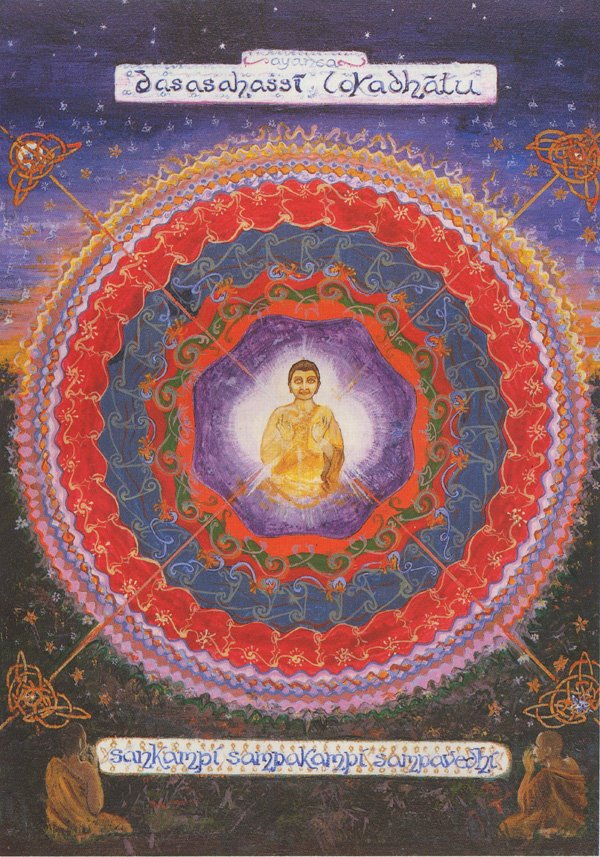 We"ve seen various ways in which the ten thousandfold world system can be experienced. In this painting, I return to the system of the five khandhas to portray it as something that can be known. Everything that can be sensed, perceived or conceived comes within the range of form, feeling, perception, mind formations and sense consciousness. This summarizes the experience of the world in a way that makes it something to work on rather than as a measureless cosmos in which we feel lost.

This analysis of the khandhas is represented by five approximately concentric bands vibrating around the presence of the Buddha. The Four Noble Truths emanate out from his still center through that vibrating realm. The innermost band represents rupa khandha, physical form, which is relatively stable and clearly defined. Our most easily discernible aspect is our physical body. Subsequent khandhas (comprising the “nama” and “vinnana” categories of experience) are of the mind and are more convoluted. These “mental” khandhas all arise together; although we talk about them as separate, actually they are four aspects of a whole. After rupa is vedana, feeling, of which there are three kinds: pleasant, neutral and unpleasant. The next is sanna, perception or associative recognition which occurs at that moment of knowing something. We feel it and then recognize what that feeling signifies: warmth for example. That"s sanna. Then there is a mental formation: “My body is warm.” A mental feeling (pleasant) arises, followed by various mental formations born of happiness, ease and so on. These “mental formations” comprise the fourth khandha, known as sankhara.

These “mental formations” include thoughts, emotions, visions and the like which occur within sense consciousness, vinnana—the fifth khandha. Sanna tends to produce sankhara. The mind begins to chatter about the perceptions that have arisen; then a further layer of feelings and perceptions arise, based upon which other sankhara are created. Sankhara are the formations that conscious self views are founded upon. Our habit or attachment is towards establishing a reality out of perceptions—what we denote as agreeable, friendly, necessary, disgusting and so on. We build up a network of these through life, and our views and attitudes—the positions that our minds chatter, complain and feel excited from—are based on these. “I” am the apparent agent of all this, or the oppressed host to it all. This, generally, is how the self is created within sense consciousness. The interweaving of the khandhas, most notably of perceptions and mind formations, is what gives rise to the sense of a person who is at first created by those forms, and then becomes the helpless victim of them. [1] So the movements of mind that operate within this system tend towards the inference of a very real self, although that self is constantly changing in dimension and expression. The effect is like that of a kaleidoscope in which the same fundamental phenomena get shifted around, but due to the internal mirror are always perceived as forming a single coherent unit. Our “internal mirror” is the mind. The mind is turned towards the world system in a particular way that reflects a self. However, in that arrangement, the mind is only able to see one set of conditions arising at a time; each set producing a different self—a wise “me”; a hurt “me”; a tender “me”; a stern “me” etc.—so the picture that appears in time is a movie of many “selves” in precarious balance and frequent conflict.

_This view is shaken by the teachings of the Buddha. If we have experienced the self view as unsatisfying, we begin to watch its expressions more closely in order to understand why. The central core of this view originates with an assumption rooted in ignorance that there is a being or thing which is continuous or has some unchangeable aspects. Cultivation of watchfulness dispels the ignorance. With attention, we can notice that what makes up this view is an energy, a tendency, arising according to inclinations of which we are only vaguely aware. This energy, attachment or upadana, is the nuclear force that binds everything together and is dependent on ignorance. With knowing, the objects that attachment wants to hold onto are seen as essentially impermanent, incapable of being held. And attachment itself is also changeable; we"re not constantly experiencing attachment to any one thing. The subtlest attachment, the view that there is something to attach to, is the most deeply ingrained. As one abides more in Truth, even this subtlest attachment fades.

Insight into the realm of the five khandhas that we take as reality reveals that what we experience is an artifact of feelings, perceptions and mental formations catalyzed by the presence (i.e., consciousness) of form. This is another way of expressing the co dependency of “name and form” and “consciousness.” These “mental formations” are based upon intention (will, volition)—direction towards or away from a feeling or perception; and attention—lingering and ruminating upon the same. They are the source of our “mental monologue” which describes and directs our experience of the world. However, when we no longer cling to our feelings and perceptions—when they are seen as ephemeral—the mind"s intention and attention is no longer fixed upon them. There is the experience of cessation or emptiness described in the Kevaddha Sutta as “signless,” “boundless,” “all luminous” consciousness. In brief, phenomena occur when there is both the arising of certain conditions and the mind holding them. “Dependent on Ignorance are sankhara, dependent on sankhara is consciousness, dependent on consciousness is name and form.” But… “with the cessation of ignorance … is the cessation of name and form.” For this reason, to the Awakened, no phenomena fundamentally “exist.” Buddhas only hold to conventional reality out of compassion for beings.

The deepening practice of insight penetrates the very way that the apparent subject sees things. Everything that arises—be it an attachment, an impulse, good or bad—has the nature to pass away. That doesn"t mean that we disapprove of them or want to get rid of them, it"s just the way it is. This shakes the basis for the belief in attachment. It"s not that we have yet to find the right object, and that we should attach to Buddha or to meditation or to the desire to attain Nibbana rather than go to a football game. It"s not about becoming a good Buddhist meditator so that you can become enlightened. It"s just the realization in the moment that one never can really get hold of anything—it is all ephemeral. It is finally impossible to become anything: there is only true being with all its potential. The whole appearance of becoming something at all has been an illusion fostered by the sleight of hand of the whirling khandhas. We can"t really be born into anything. Our true nature is Deathless.

The insight into Dhamma shakes the view of a self. It is from that view that one needs to be liberated. The progressive experience of insight is one in which one"s world does get rattled—for the better. Ideas about the kind of person one is, what one should be, or the way the world is or should be are all seen as impermanent and ephemeral. However, when the normal outlets for attachment and becoming no longer provide valid possibilities, the mind will produce fantasies, memories, sometimes peculiar visions and voices—anything to arouse desire, fear, anxiety or interest, and anchor it to the realm of self. It doesn"t matter what it is—you can think the most ridiculous thoughts, and have the most bizarre cravings for things that you would never have dreamed of before you began to practice Dhamma. The self view in the mind will come up with anxiety: “Maybe I"m going crazy, maybe I"m a really brutal person underneath it all, maybe the kamma from a past life as a dope peddler is catching up with me.” Then there are also mystical perceptions: “Maybe I am destined to be the new world teacher. The Masters on the seventh level are communicating through me.” Anything will do, no matter how corny, to reinforce the mind"s view of self. As we begin to see how ruthless and creative the force of attachment is, we can more readily accept that the whole of this show is just movement of the khandhas. As such, there is only one real alternative to spinning on the Wheel of Becoming. And that"s to get to the heart of all this movement, and to abide in that which can know it all.

We do this not by taking issue with the creations of the mind, but by investigating what they are all based upon. What do conditions depend on? What is the root of these sankhara? The root of it all is always ignorance, unknowing. That unknowing of Truth stimulates the outflows that imprint personal projections and biases onto the world we experience. So rather than create desires, hopes, aversions, and probabilities, we activate the principle of knowing. In iconographic terms, this means putting the Buddha at the center of the world system as he is in this painting, with his hands in the mudra that Buddhas use to signify Suchness, unbiased attention.

Through cultivating Suchness, we can purify sanna and sankhara. We"re not trying to destroy the khandhas. The purification is that the perceptions are no longer accumulated to create a personal habitual world. Instead of perceptions, there is the moment by moment act of perceiving. Pure recognition has a delightful quality to it—a radiant quality where all the accumulated perceptions are purified, and one sees things with greater clarity. This purification is also in terms of intention and attention—the primary sources of sankhara. With intention towards Truth, towards dispassionate seeing and attending to things as they are (rather than how we want things to be), the tendency to build perceptions out of wrong (self)-view can cease. Then clearer perceptions and selfless motivation can give rise to what is lovely in the world in terms of attitude, speech and action. And that is the theme of the next painting.

The process outlined in the extract from the Madhupindika Sutta quoted in chapter 14.