Chapter 22 - The World Of Dhamma 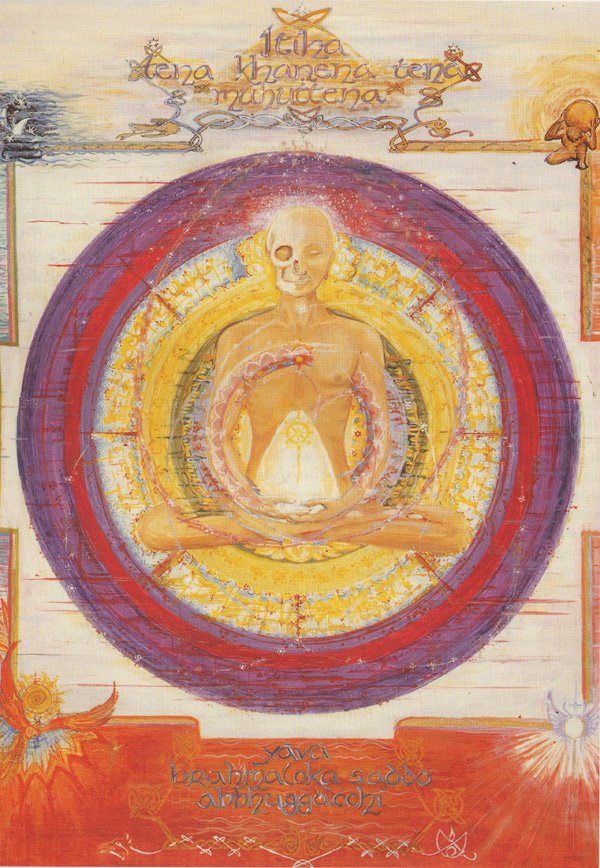 Itiha tena khanena tena muhuttena yava brahmaloka saddo abbhuggacchi.
So indeed in that hour, at that moment,
the word traveled up to the realm of the highest divinities.

The message I"m trying to convey through this painting is a reminder that although the Universe—of matter or consciousness—can seem vast, to one who meditates or understands the nature of things, it can be known in its essence. Anything that has form can be classified in terms of the four elements: earth, water, air and fire. These elements are symbolized by the figures in the corner of the frame of this painting starting from earth in the top right and proceeding in a clockwise direction through water, air and fire. We have seen how these elements can be explained in general physical terms as size, shape, mobility and caloricity; or as psychological types. They also help to illustrate more specifically the human body for the purposes of meditation.

One of the meditations on the body equates flesh, bone and solid features with the earth; blood, sweat and other liquid features with water; breath and gases in the digestive system with the air element; and bodily heat with the fire element. Such a perceptual shift is conducive to a dispassionate experience of the body as not self.

In the practice of meditation, this same analysis can be extended by translating mental states into one of these elemental states. This is not in order to deny or criticize them, but rather to see them in a more dispassionate light as views rather than facts, and is a skillful means in which mental phenomena come to be “known.” So you can contemplate anger as “fire;” and that allows you to reflect upon it objectively rather than thinking: “I must not be angry, after all, I"ve no reason to be annoyed; I should be more peaceful!” To contemplate it as an element gives you a dispassionate perspective that allows the anger to pass or change into a more positive form such as vigor. This avoids suppressing feelings or creating guilt. If there is a reason to be annoyed, one can express the cause of the annoyance rather than blast out the result!

Visionary views—the “Air” element—are inherently abstract and can lead to a dogmatic idealism if blindly adhered to. Yet if one contemplates this quality of principles, it can be tempered by realism. The result is a malleable intelligence that guides the manifest world. Similarly, “Water” relates to the wavering quality of emotion and intuitions that break down definitions and blend everything together, and becomes a serene sensitivity if contemplated without attachment. We feel harmony and balance rather than form definitions of it. On the negative side, this faculty lacks discernment and confidence in making decisions or comparative judgements for conventional purposes. “Earth” represents the process of organizational thought. Earth is like a loyal secretary in the mind that works according to established systems. Thinking from the “Earth” position measures and gives definition, although the negative consequence is that it tends to categorize and emphasize the separative quality of phenomena. “Earth” inclines towards conservative attitudes that lack vision; some dispassion is needed to encourage it to respond to change and spontaneity.

This is the world that Tathagatas know. They have seen this world caused, arising, sustained and ceasing. Not knowing these elements as they are and how they manifest physically and mentally, as well as not learning the skill of responding to them wisely can get us into a lot of trouble. And there"s no way out—if we don"t act wisely with them, we act carelessly, or try to suppress them which causes more trouble. And for most of us, right up to the realm of the brahmaloka, there"s the hope and the inclination that some aspect of these elements, some refined blend of body, emotion, energy or imagination—in either ourselves or in another—would be worth investing in. It seems that a sum total of changing elements is all there is and that is all we are. Even the Great Brahma did not know anything beyond the four elements. In his ethereal realm, the elements still remained, albeit in a refined mental form. And Brahma, like the devata, is not in the best position to know the elements as changeable and unsatisfactory and as selfless universal qualities. Brahmas are too refined and live too long to know about letting go.

To say that the word of the Dhamma traverses the devaloka signifies that this teaching is relevant to the most refined or coarse states of experience on a physical or mental plane. Every being on the Wheel of Becoming experiences the elements. To unenlightened beings, the elements appear in forms that are either delightful or repelling but always experienced as having some kind of personal quality. All of the devas and brahmas of refined form see things that way. So in essence, no world of form or formlessness, nor the deliverance from those worlds, are beyond what can be experienced through the human body and mind:

In this picture, the essential qualities from the realm of form, including the celestial realms, are being contemplated within the body and its perceptions. The body, which is much more calming and steadying than mental phenomena, is generally used as a tranquil and peaceful foundation for meditation. Sensual desire is cooled by reflection on the elements of the body; calm and tranquility is developed by attention to the breath—evaluating the breath and discerning its present quality. When these have been developed to some extent, brightness and expansiveness of heart is evoked by reflection on the “divine abodes” of kindness, compassion, sympathetic joy and equanimity. These are the elemental qualities of the happiness of the devaloka. Each of the concentric bands around the figure is colored according to the color that dominates the previous paintings of the devaloka; purple violet and deep red refers to the brahmakayika devaloka and so on down to the ochre, golden yellows of the Bhumma deva which forms the innermost circle.