Chapter 24 - Light In The World 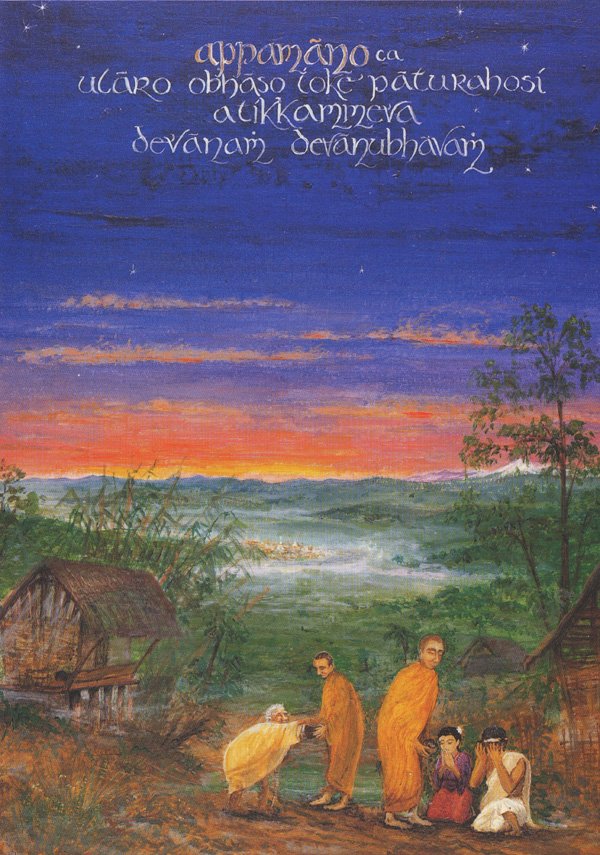 One can take this to mean that, at that time, the Buddha produced a great light. There are said to be four such occasions: when a Buddha to be begins his last birth; when that Bodhisatta realizes complete enlightenment; when the Buddha first transmits the Dhamma; and when the Buddha passes from the mortal form. Such a light is said to be visible throughout the world system—from Avici Hell to the brahmaloka. Impressive though this may be, to me such a light is measurable, or at least more measurable than the light of the Buddha"s wisdom which extends through time also. The light of Truth certainly surpasses the glory of the devas.

That is what Buddhas bring into the world, and it is boundless in that it can encompass the ten thousandfold world system—the devaloka, the hell worlds, the animal worlds; in fact, all the Six Realms of Existence. And it is brought into this world as a teaching for human beings.

When human beings incline towards Truth, they bring forth qualities that are lovely. Kindness, gentleness, patience, generosity are natural aspects of the abandonment of self view through insight. They manifest in ways that are tangible in planetary life. This painting brings us back to earth which can be a very beautiful place when the light of Truth shines in it.

The painting depicts one way in which what is beautiful appears. It is a tribute to a practice of Dhamma that I have been fortunate enough to be a part of—that of going on alms round in the morning. Dawn in tropical countries is an exquisite time of day; the rest of the day one feels very hot and sticky, but the dawn is always fresh and evanescent. The scene of the painting is rather as I have imagined the alms round (pindapada) in India at the time of the Buddha. In fact, the rural districts of Thailand looked like this when I lived there as a monk. Some of the simple houses with their grass roofs were perched on stilts to prevent flooding during the rains. The village in the painting is very simple. Behind it is the river while in the background is perhaps Varanasi itself, near where the Buddha was teaching. And during the time when the Buddha gave these teachings, some of the Group of Five would go out collecting alms food which they all shared.

In living as alms mendicants, Buddhist monks and nuns relax their hold on the most fundamental requisite for existence. This is a great renunciation. It"s not the food itself that is renounced but the hold on it. Monks and nuns have to live on what people offer, when it is offered. They don"t store food past noon nor can they follow any preferences about food. Bhikkhus who had been strict vegetarian brahmins would train themselves to accept meat given by people of the Untouchable caste. That cuts through a lot. Even today, people still have strong views around food—protein, unsaturated fats, meat, vitamins—but to train yourself to live on what is given means that you eat generosity.

These mendicants are not even allowed to ask for food, but only to be present for those who wish to make an offering. It may sound phoney to you, but in the practice of walking for alms, any thought of where and whether any food is going to be found just causes suffering. Naturally, one is not inclined to emotionally pressurize anyone to give food; that would be difficult to live with. The result is that the only way to go for alms mindfully and without suffering, is to go without seeking but with the attitude: “May those who would be made happy by giving, offer what they please.” Monks and nuns don"t promise people long life or spiritual rewards, but in receiving in silence and composure, try to generate the kind of attention that will allow the donor to focus on the purity and joy of their own goodness. The act of receiving alms food sets up the reflection to make oneself worthy of the generosity of others, and to share what one has received with fellow monks and nuns. For the spiritual life, such themes are the most precious form of nourishment.

For the householders, the alms round helps to give the day a structure that reflects on spiritual themes and keeps them in touch with the example of renunciation—which is not always apparent in the world. The generosity that it entails is a fundamental aspect of the enlightened mind. The whole practice is based on a bringing forth from oneself; and it is nourished by the joy that comes when such giving of oneself is done without demand or expectation. When it is performed in a way that transcends any personal connections, people find it easier to focus on the quality of their own mind, and connect with their selflessness. Generosity is one example of the many illuminating experiences of the Way.

It is possible to live spiritually in the world if you don"t hold it. There is no need to get rid of the body or not have contact with other people; the light of the Dhamma allows us to see the value of living according to spiritual conventions, standards and reflections rather than material values, ego needs and social pressures. The Eightfold Path is the basis of a spiritual society in which householders and monastics can live. To sustain that relationship of mutual participation in Dhamma without personal holding is a very fine practice. The training in this area is what the Buddha called “Vinaya”—meaning “that which dispels (or leads out of)” delusion.

Vinaya is generally considered to be a monastic code of discipline, which is true in a way; but, more accurately, it is a very comprehensive practical exposition on the moral and ethical application of the Eightfold Path. There are books of Vinaya which describe the practice for the lifestyle of the samana disciple while some of the suttas, notably Sigolavada Sutta (Digha Nikaya) and Mahamangala Sutta (Sutta Nipata) address people living the family life. Thus the Vinaya trains us to live in ways that will be conducive to higher understanding and liberation. The frugality of a samana"s material belongings, the code of polite and kindly behavior between monks, nuns and lay people, are all supportive of more composed and gentle mind states. And it is all a voluntary training that one takes on as a personal responsibility and living example of one"s aspiration towards Truth. Yet it is concerned with mundane details of life such as monks not hassling nuns to wash their robes for them, avoiding currying favor with influential people, how to deal with disputes, and how to offer correction to someone in a non threatening and kindly way. There is a lot of skill and little idealism in Vinaya. By using it, the mind comes to reflect upon the nature of ethics, realistically appraise material needs and learn about love without sentiment or fantasy.

This training has great beauty in it. It has a beauty on the conventional plane in that it provides the practical guidelines for non attachment within the world of relationships, duties and possessions. No wonder that the Vinaya is described as the life blood of the Buddhist life. Of course, you have to use Vinaya with Right View—with a mind that inclines towards understanding and working with the actualities of human nature; otherwise it can become a meaningless code of “do"s and don"ts,” with all the moralising righteousness or blind adherence to the letter of the law that permeates immature humanity. So the complete teachings of the Buddha are a complementary pair: Dhamma Vinaya. Vinaya keeps the Dhamma from becoming abstract and idealistic; Dhamma instills a non dogmatic flexibility to Vinaya. Together, they keep the light of the Buddha"s dispensation going—as it has for thousands of years, through many different countries and civilizations.
_