Chapter XIV - The Adventures Of Ishtar

IN this section I have included the sixth and seventh tablets, which both primarily refer to the doings of Ishtar.

The sixth tablet is in better condition than any of the former ones, and allows of something like a connected translation.

The seventh tablet opens with the words, "Friend why do the gods take council." I am uncertain if I have found any other portion of this tablet, but I have provisionally placed here part of a remarkable fragment, with a continuation of the story of Ishtar. It appears that this goddess, failing in her attempt in heaven to avenge herself on Izdubar for his slight, resolved to descend to hell, to search out, if possible, new modes of attacking him.

Columns I. and II. are lost, the fragments recommencing on column III.

After many lines destroyed, the story recommences in the fourth column.

Here the story is again lost, columns V. and VI. being absent. It is evident that in the third column some one is speaking to Ishtar trying to persuade her not to descend to Hades, while in the fourth column the goddess, who is suffering all the pangs of jealousy and hate, revels in the dark details of the description of the lower regions, and declares her determination to go there.

The descent of Ishtar into Hades from K.

This remarkable text shows Ishtar fulfilling her threat and descending to Hades, but it does not appear that she accomplished her vengeance against Izdubar yet.

At the opening of the sixth tablet we have the final scene of the contest with Humbaba. Izdubar, after slaying Humbaba, takes the crown from the head of the monarch and places it on his own head, thus signifying that he assumed the empire. There were, as we are informed in several places, kings, lords, and princes, merely local rulers, but these generally submitted to the greatest power; and just as they had bowed to Humbaba, so they were ready now to submit to Izdubar. The kingdom promised to Izdubar when he started to encounter Humbaba now became his by right of superior force, and he entered the halls of the palace of ErecK and feasted with his heroes.

We now come to a curious part of the story, the romance of Izdubar and Ishtar. One of the strange and dark features of the Babylonian religion was the Ishtar or Venus worship, which was an adoration of the reproductive power of nature, accompanied by ceremonies which were a reproach to the country. The city of Erech, originally a seat of the worship of Anu, was now one of the foremost cities in this Ishtar worship. 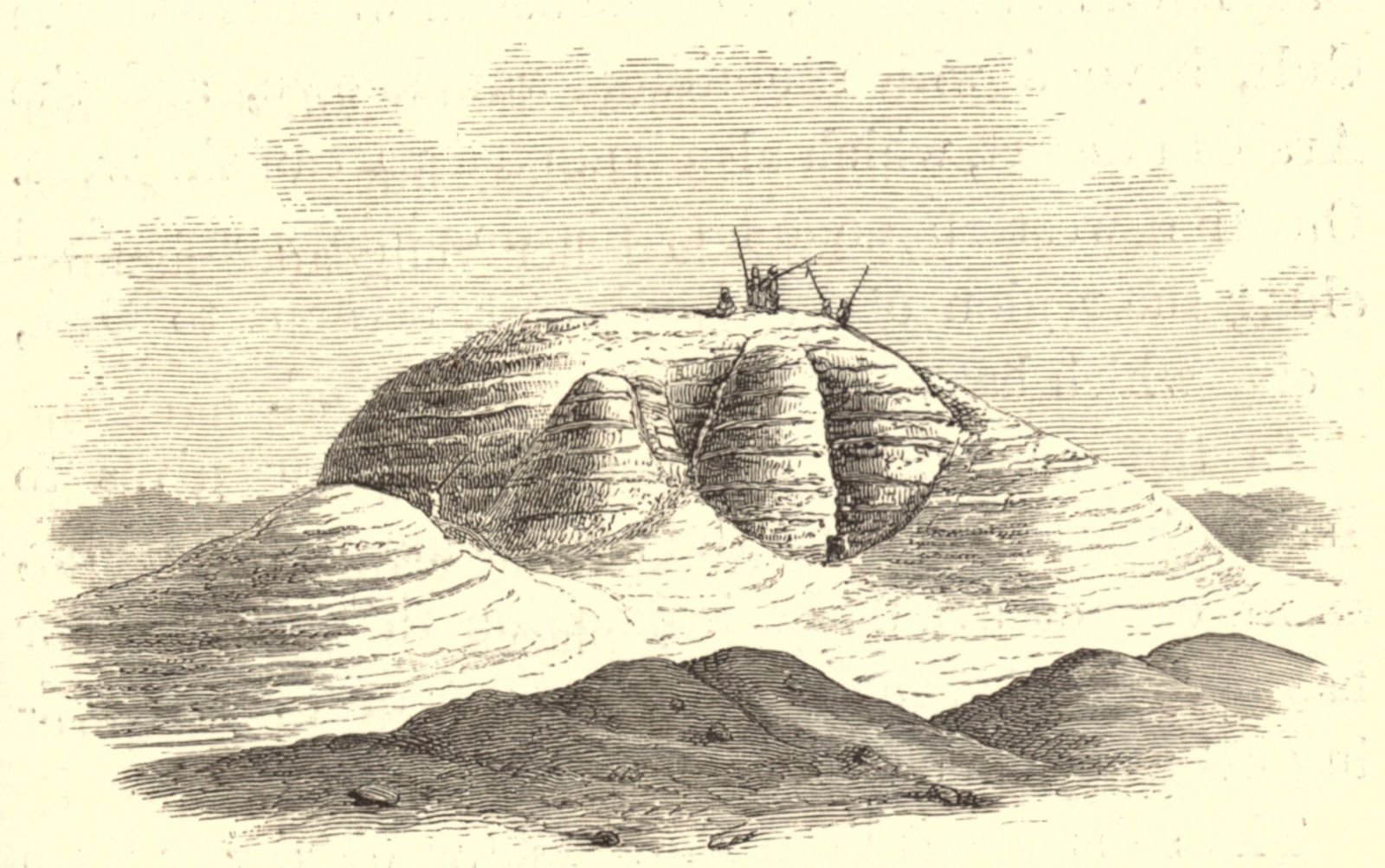 Bowareyeh Mound at Warka (Erech), site of the Temple of Ishtar.

Certainly Ishtar is represented in the legends as living at the time, and as being the widow of Dumuzi, the ruler of Erech, and it is possible there may have been some basis for the story in a tradition of some dissolute queen whose favour Izdubar refused ; but we have to remember that these Izdubar legends were not intended for history, but for historical romance, and the whole story of Ishtar may be only introduced to show the hero s opposition to this worship, or to make an attack upon the superstition by quoting Izdubar s supposed defiance of the goddess.

The thirteenth to sixteenth lines of the first column appear to mark out the ultimate boundaries of the empire of Izdubar, and the limits mark somewhere about the extent assigned to the kingdom of Nimrod by tradition. The northern boundary was Bitani by the Armenian mountains, the eastern boundary the mountain ranges which separated Assyria and Babylonia from Media, and the south was the Persian Gulf, beyond which nothing was known, and the Arabian desert, which also bounded part of the west. On the western boundary his dominions stretched along the region of the Euphrates, perhaps to Orfa, a city which has still traditions of Nimrod.

In the course of the answer Izdubar gives to Ishtar, he calls to mind the various amours of Ishtar, and I cannot avoid the impression that the author has here typified the universal power of love, extend ing over high and low, men and animals.

The subsequent lines show Ishtar obtaining from her father the creation of a bull called " the divine bull;" this animal I have supposed to be the winged bull so often depicted on Assyrian sculpture, but I am now inclined to think that this bull is represented without wings. The struggle with a bull, represented on the Babylonian cylinder, figured here, and numerous similar representations, seem to refer to this incident. There is no struggle with a winged bull on the Izdubar cylinders.

It would appear from the broken fragments of column IV. that Heabani laid hold of the bull by the head and tail while Izdubar killed it, and Heabani in the engraving is represented holding the bull by its head and tail.

At the close of the sixth tablet the story is again lost, only portions of the third and fourth columns of the next tablet being preserved, but light is thrown on this portion of the narrative by the remarkable tablet describing the descent of Ishtar into Hades. I think it probable that this tablet was in great part an extract from the seventh tablet of the Izdubar legends.

The tablet with the descent of Ishtar into Hades was first noticed by Mr. Fox Talbotin the " Transactions of the Royal Society of Literature," but he was entirely abroad as to the meaning of the words. After this I published a short notice of it in the u North British Review," to clear up some of the difficulties, and it has been subsequently translated by Lenormant and Oppert, and re-translated by Mr. Fox Talbot. These translations and various notices of the Deluge tablets will be found in " Les Premieres Civilisations " of Francois Lenormant, Paris, 1874, a small pamphlet on the Descent of Ishtar, by Professor Oppert, and various papers on these subjects by Mr. Fox Talbot, in the " Transactions of the Society of Biblical Archaeology," vols. i., ii., and in., and my own translation in the " Daily Telegraph," August 19, 1873.

The story of the descent of Ishtar into Hades is one of the most beautiful myths in the Assyrian inscriptions ; it has, however, received so much attention, and been so fully commented upon by various scholars, that little need be said on the subject here.

It is evident that we are dealing with the same goddess as the Ishtar, daughter of A.nu, in the Izdubar legends, although she is here called daughter of Sin (the moon god) .

The description of the region of Hades is most graphic, and vividly portrays the sufferings of the prisoners there ; but there are several difficulties in the story, as there is no indication in some cases as to who acts or speaks. Uddusu-namir, created by Hea to deliver Ishtar, is described as a composite animal, half bitch and half man, with more than one head, and appears to correspond, in some respects, to the Cerberus of the classics, which had three heads according to some, fifty heads according to others.

The latter part of the tablet is obscure, and appears to refer to the custom of lamenting for Dumuzi or Tammuz.