OF the three tablets in this section, the first one is very uncertain, and is put together from two separate sources; the other two are more complete and satis factory.

I am uncertain again if I have discovered any of this tablet ; I provisionally place here some fragments of the first, second, third, and sixth columns of a tablet which may belong to it, but the only .fragment worth translating at present is one I .have given in "Assyrian Discoveries," p. 176. In some portions of these fragments there are references,, as I have there, stated, to the story of Humbaba, but as the fragment appears to refer to the illness of Izdubar I think it belongs here.

The second, third, fourth and fifth columns appear to be entirely absent, the inscription reappearing on a fragment of the sixth column.

The fourth and fifth columns of this tablet are lost. This part of the legend appears to refer to the illness of Izdubar.

It must here be noted that my grounds for making this the eighth tablet are extremely doubtful, it is possible that the fragments are of different tablets; but they fill up an evident blank in the story here, and I have inserted them pending further discoveries as to their true position.

In the first column Heabani appears to be addressing certain trees, and they are supposed to have the power of hearing and answering him. Heabani praises one tree and sneers at another, but from the mutilation of the text it does not appear why he acts so. I conjecture he was seeking a charm to open the door he mentions, and that according to the story this charm was known to the trees. The fragment of the sixth column shows Heabani unable to interpret a dream, while Izdubar asks his friend to fight.

After this happened the violent death of Heabani, which added to the misfortunes of Izdubar ; but no fragment of this part of the story is preserved.

This tablet is. in a somewhat better state than the others, and all the narrative is clearer from this point, not a single column of the inscription being entirely lost. The ninth tablet commences with the sorrow of Izdubar at the death of Heabani.

The second column shows Izdubar in some fabulous region, whither he has wandered in search of Hasisadra. Here he sees composite monsters with their feet resting in hell, and their heads reaching heaven. These beings are supposed to guide and direct the sun at its rising and setting. This passage is as follows :

The rest of this column is lost. In it Izdubar converses with the monsters and where the third column begins he is telling them his purpose, to seek Hasisadra.

In this mutilated passage, the monster describes the journey to be taken by Izdubar ; there are now many lines wanting, until we come to the fourth column.

This is the bottom of the fourth column;

There are five lines lost at the top of the fifth column, and then the narrative reopens; the text is, however, mutilated and doubtful.

Some of the words in this fragment are obscure, but the general meaning is clear. In the next column the wanderings of Izdubar are continued, and he comes to a country near the sea. Fragments of several lines of this column are preserved, but too mutilated to translate with certainty. The frag ments are :

This tablet brings Izdubar to the region of the sea-coast, but his way is then barred by two women, one named Siduri, and the other Sabitu. His further adventures are given on the tenth tablet, which opens :

The rest of this column is lost, but I am able to say it described the meeting of Izdubar with a boat man named Urhamsi, and they commence together a journey by water in a boat on the second column.

Very little of this column is preserved; I give two fragments only here.

Here again there are many wanting lines, and then we have some fragments of the bottom of the column.

Here there are many lines lost, then recommencing the story proceeds on the third column.

Here there is a blank, the extent of which is uncertain, and where the narrative recommences.it is on a small fragment of the third and fourth column of another copy. It appears that the lost lines record the meeting between Izdubar and a person named Ragmu-seri-ina-namari. I have conjectured that this individual was the wife of Hasisadra or Noah; but there is no ground for this opinion; it is possible that this individual was the gatekeeper or guard, by whom Izdubar had to pass in going to reach Hasisadra. 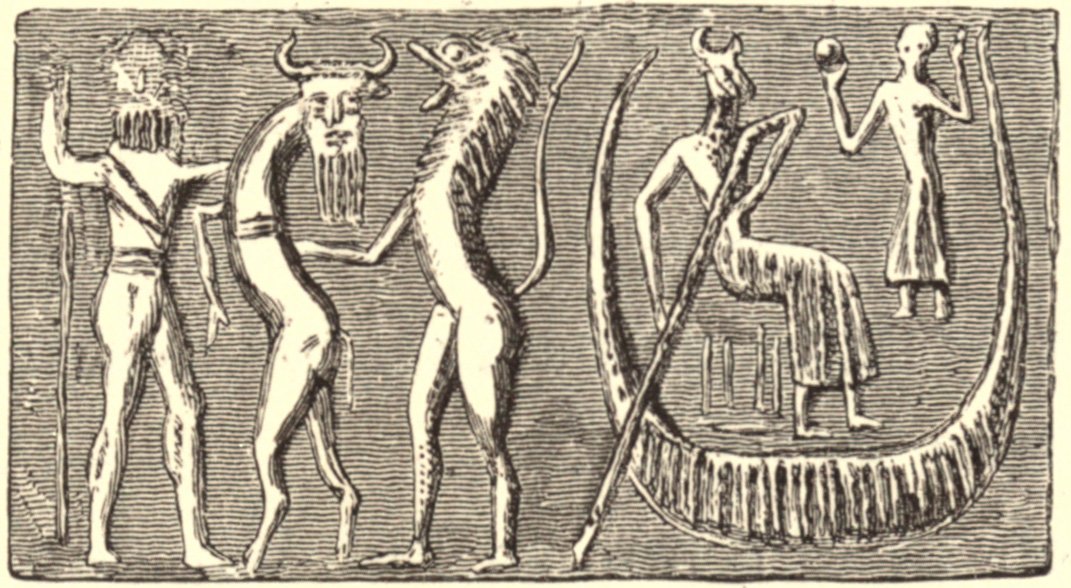 Izdubar, Composite Figures, and Hasisadra (Noah) in the Ark;
From an early Babylonian Cylinder.

It is curious that, whenever Izdubar speaks to this being, the name Ragmua is usecj, while, whenever Izdubar is spoken to, the full name Ragmu-seri-ina-namari occurs. Where the story re-opens Izdubar is informing Ragmu of his first connection with Heabani and his offers to him when he desired him to come to Erech.

The speech of Ragmu to Izdubar and the rest of the column are lost, the narrative recommencing on Column V. with another speech of Izdubar.

Here the record is again mutilated, Izdubar further informs Ragmu what he did in conjunction with Heabani. Where the story reopens on Column VI.

Izdubar relates part of their adventure with Hum- baba.

Here again our narrative is lost, and where we again meet the story Izdubar has spoken to Hasisadra and is receiving his answer.

This statement of Hasisadra closes the tenth tablet and leads to the next question of Izdubar and its answer, which included the story of the Flood.

The present division of the legends has its own peculiar difficulties; in the first place it does not appear how Heabani was killed. My original idea, that he was killed by the poisonous insect tambukku, 1 find to be incorrect, and it now appears most likely either that he was killed in a quarrel with Izdubar, as seems suggested by the fragment in p. 246, or that he fell in an attempt to slay a lion, which is implied in the passage p. 259.

In the ninth tablet I am able to make a correction to my former translation ; I find the monsters seen by Izdubar were composite beings, half scorpions, half men. The word for scorpion has been some time ago discovered by Professor Oppert, and I find it occurs in the description of these beings ; also on a fragment of a tablet which I found at Kouyunjik the star of the scorpion is said to belong to the eighth month, in which, of course, it should naturally appear.

This assists in explaining a curious tablet printed in "Cuneiform Inscriptions," vol. iii. p. 52, No. 1, which has been misunderstood. This tablet speaks of the appearance of comets, one of which has a tail "like a lizard (or creeping thing) and a scorpion."

The land of Mas or desert of Mas over which Izdubar travels in this tablet is the desert on the; west of the Euphrates; on the sixth column the frag ments appear to refer to some bird with magnificent feathers like precious stones, seen by Izdubar on his journey. 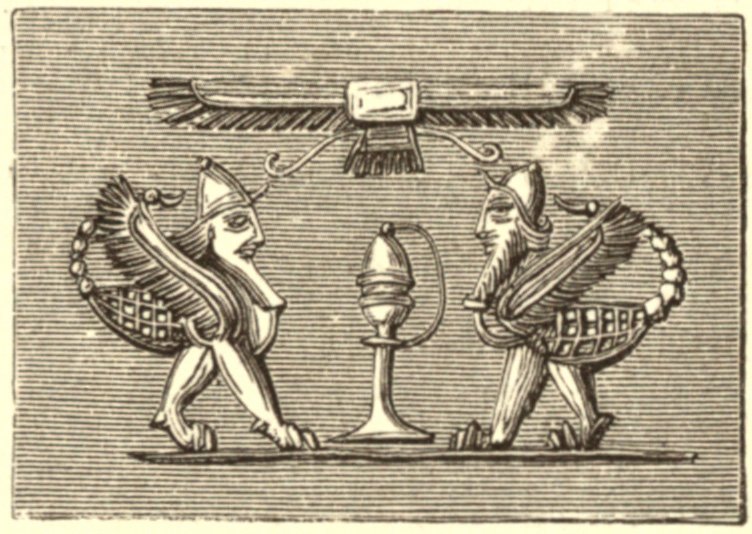 I have altered my translation of the passage in pp. 255, 256, which I now believe to relate that Izdubar tit the direction of Urhamsi made a spear from one of the trees of the forest before going across the waters of death which separated the abode of Hasisadra from the world of mortals. I do not, however, understand the passage, as from the mutilated condition of the inscription it does not appear what he attacked with it.