Chapter 19 - The Abodes Of Bliss 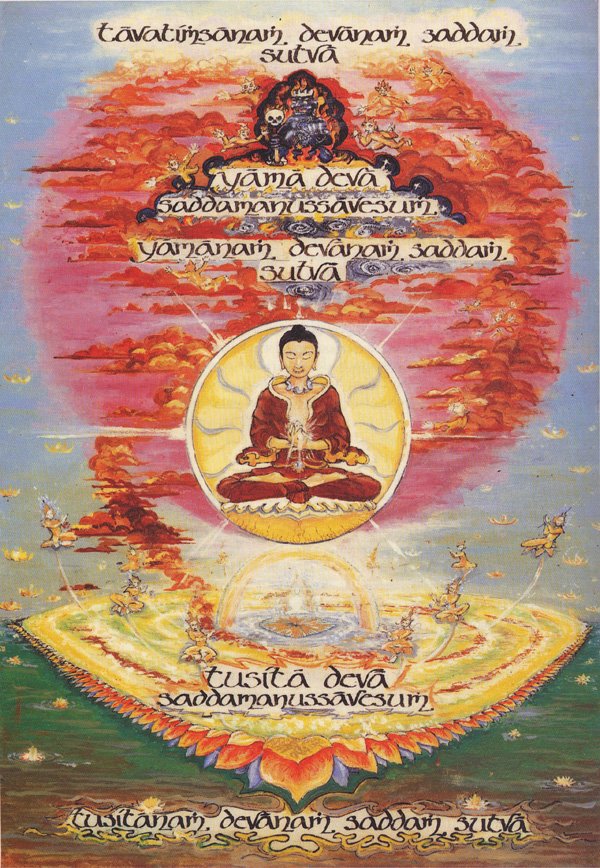 This illustration is of the next level of celestial abode that the message was transmitted to. The Yama devas picked up the cry from the Tavatimsa devaloka and the Tusita devas picked up the cry when they heard what the Yama devas had said. In the picture, the Yama devaloka is at the top, and underneath it, corresponding to the word sequence found in the Sutta, is the Tusita heavenly realm. That"s the way I"ve depicted it to correspond to the way we read from the top to the bottom of the page. Of course, the sequence in the Sutta describes an ascending order of heavenly realms.

The Yama devas are those who have gone beyond any kind of unpleasant impingement. At this level, there is no fighting with asuras. In the picture, the Yama devas are flaunting the Lord of the Dead; indicating that they feel they have no need to pay heed to his warnings—his messengers of old age, sickness and death don"t come to this realm. This is a slight exaggeration, but with a life span of 144 million years, one might be excused a little poetic license. Anyway, here all is very jolly.

The Tusita devas are the smiling, blissful devata; Yama devaloka plus. The Tusita devaloka is where, according to Buddhist legends, the Bodhisatta Metteyya is living. That"s the one who will be the next Buddha, and will emphasize loving kindness in his teachings. Here, he is in the center of the lotus world of Tusita heaven, teaching Dhamma and biding his time with all the Tusita devas being blissed out around him.

Both of these realms are more refined than the lower devaloka. In fact, at this stage, we have left solid ground altogether. The Tavatimsa devas live on Mount Meru, but the subsequent higher realms are in the air and ethereal abodes above it. And the higher you go, the longer the life span. What does this all mean in terms of the mind?

The ascent to higher realms signifies increasingly refined states of happiness, or happiness created by more refined objects. With the Bhumma devas, it was the joys of the natural world—bucolic idylls, satyrs, fauns and the rest of it. I can relate to that. To enter that level of perception means that the mind is free from remorse, violence and craving for coarse material things such as money or powerful stimulation. To have the Bhumma deva mentality is a sign of some virtue, and the development of wholesomeness. It is even more so with the realms of the Four Great Kings and the Tavatimsa, the realms that relate to the sense of custodianship of the earth and responsibility for the society. At this level, it"s not the happy go lucky pastoral glee that gives us happiness; but that in us which delights in good deeds, in rightness and being inspired by the wise. Here, there is less frivolity and a steadier radiance from the heart.

At the level that has left the earth altogether, the realms of the Yama devas and on up, the mind has entered the abodes of what is conventionally known as spirituality. At these levels, we are concerned with subtle energy bodies and vibrations, chakras and meridians, sensitivity to the astral and ethereal planes. The Tusita devaloka is like the vision and rapture that accompany religious fervor. These come when you absorb into the feeling that your teacher is the greatest and is the one who has all the answers. This rapture also comes when your spiritual practice, meditation or faith is going well and there are no problems; it"s plain sailing and you feel totally confident that this is the way for you.

There is a more refined happiness available at these levels: one is involved with the quality of mental consciousness, so the physical realities are less relevant. Instead of being concerned with a person"s conduct, one picks up their vibrations or their aura. This refined sensitivity is quite delightful, and the more refined the state of consciousness, the longer it appears to continue—since time dilation is another feature of refined consciousness. States of heightened sensitivity, even induced through psychedelic drugs, can seem like an eternity in duration. You forget about impermanence. And this is what is happening here.

The Wheel of the Law that Kondanna saw so clearly—the Truth that everything that has the nature to arise, has the nature to pass away—is fading from view. The central image is the figure of the Buddha as a mystic, and it is to this image, not the Good Law, that the devata pay homage and respect. We too can tend to worship the personification of our own values and ideals and lose touch with the teaching that transcends them all. People will quote a teacher out of context or slightly alter the emphasis and omit some qualifying remarks in order to justify their own viewpoints.

When you lose contact with the physical or the mundane realm, delusion born out of attachment to ethereal perceptions becomes much more possible. People will go so far as to neglect domestic and social responsibilities, and consider chores as mundane work that somebody else can do. The idea comes up that if I"m on retreat, I shouldn"t have to be disturbed by doing my laundry or cleaning the house: “I"m having an important spiritual experience; don"t bother me.”

This attitude is another aspect of self view and becoming. If it is really strong, it can even develop into sanna vipallasa, “distorted perception”—overwhelming rapture, visions, intimations of personal destiny, voices from the other shore and the rest of it. In such cases, the teacher will usually assign such disciples mundane tasks, such as sweeping the hall, to keep them in contact with other grounded humans who understand their predicament. It passes. Undergoing this kind of “distorted perception” experience can really upset a person"s balance and understanding. Therefore, in contemplative monastic training, attachment to refinement is seen as potentially unbalancing, and any attitudes founded upon that attachment get short shrift.

In monastic life, we have to live in a community and have responsibilities to each other, to the monastery, to the lay people and to the tradition. We have to perform many mundane duties. This means that we don"t get into refined states of bliss for very long, but we do develop an equanimity, serenity and openness of heart to life as it is. As those important qualities can be developed on any plane of existence, one doesn"t hanker after some and reject other states of being. All that is needed for Awakening and liberation from the suffering of self view is a continual reflection on impermanence.

Not that I"m putting down the Yama and Tusita devata. It"s good not to get stuck on the materialistic and functional plane; it"s helpful to refine the mind and realize that the apparent world is dependent on consciousness. The ethereal realms are no problem, provided that one doesn"t attach to them. Yet if we attach to such states, no matter how long they may seem to last, when the mystical experience ends or the ethereal body starts to droop, what happens to the so called “enlightenment”? Gone, isn"t it? Then what do you do to get it back?

When I painted this picture, I was on a meditation retreat, and certain colors kept arising in my mind. I was contemplating the feeling or the tone that a color can bring up. Mood and feeling were playing a more important role in my meditation practice at that time. In general, over the four years of creating this series of paintings, as one may easily deduce, there was a development towards tone and overall mood expressed through design and color and away from the clear definitions of line. Spiritually, I felt part of things, less an observer/analyzer. I also found my mind readily bringing images and form into being. I think I was heading for the next devaloka, the realms of creative delight. …

When they heard the cry of the Tusita devas …