The Temple At Uppsala

The Temple at Uppsala was a religious site in Gamla Uppsala (Old Uppsala), near modern Uppsala, Sweden, that was created to worship the Norse gods of prehistoric times....

The Temple at Uppsala was a religious site in Gamla Uppsala (Old Uppsala), near modern Uppsala, Sweden, that was created to worship the Norse gods of prehistoric times.

The popular image of Uppsala is mainly based on Adam of Bremens’ detailed description in The History of the Archbishops of Hamburg-Bremen. His account of the famous pagan centre has been studied and discussed vividly for centuries and has stimulated the fantasy of many historians and laymen. In spite of the great risks involved in interpreting written sources like this clearly political and Augustinian work, and in spite we have very few evidence of human sacrifice or gold plated temples, Adam’s account has served and – more or less unconsciously - still serves as a model for ritual places and cultic acts elsewhere in Sweden, even in Scandinavia as a whole. The temple is sparsely documented in other sources, but it is referenced in the Norse sagas and Saxo Grammaticus' Gesta Danorum.

The chief controversies concerning the temple focus specifically on determining if the pre-christian society of Sweden had any temple at all, and, if so, where in Old Uppsala the temple was located and whether or not it was a building. Some scholars believe that the temple was confused with the hall of the Swedish kings (located some tens of metres to the north of the present church).

In 1164, the archbishopric of Sweden was established at Gamla Uppsala, once the political centre of the Svear kingdom in the late Iron Age and a stronghold of pre-Christian cult. This highly symbolic decision was manifested through the construction of one of the largest churches in Scandinavia. The cathedral church at Gamla Uppsala was allegedly built on the same spot as the famous pagan temple described by Adam of Bremen in the early 1070s. Though still maintained today in school textbooks and elsewhere, this conclusion is clearly erroneous. In Scandinavia, many churches were built in the vicinity of older pagan sanctuaries, but there is little, if any, evidence that churches were built and consecrated on top of them. In 2003 and 2004, scientists Neil Price and Magnus Alkarp, using ground penetrating radar and other geophysical methods, found the remains of what was interpreted as a wooden church located directly under the northern transcept of the Medeival cathedral, and two other buildings, one of them a bronze age building, and the other probably a Viking-age feasting halls.

Freyr, who allegedly used to reside at Uppsala. Snorri did not mention a temple, since the word did not exist in old norse language. Snorri and Saxo Grammaticus both claimed that it was Freyr who began the tradition of human sacrifices at the temple site. The Norse sagas, Saxo Grammaticus and Adam of Bremen describe the sacrifices at Uppsala as popular festivals that attracted people from all over Sweden. Many of these sources provide accounts of human sacrifice for the Norse gods.

According to some highly doubtful sources, the Temple at Uppsala was probably destroyed by King Ingold I in 1087 during the last known battle between the pagans and the Christians. 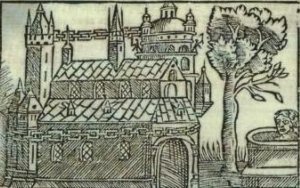 Image right: Image showing the golden chain on the temple, the well and the tree, from Olaus Magnus' Historia de Gentibus Septentrionalibus (1555)

Adam of Bremen wrote that the Swedes had a famous temple named Ubsola near which there was a large tree with wide branches. It was always green, and no one knew what species it was. There was also a well where they apparently used to perform the sacrifices. One of these was to immerse a living man in the well. If the man disappeared the gods would answer the prayers. It was not far from the towns of Sigtuna and Birka. A golden chain was around the temple hanging over its gables. The chain could be seen glittering far and wide for those who approached. It stood on flat ground surrounded by mounds like a theatre. Inside the temple, which was richly decorated with gold, there were three statues of gods. The most important god, Thor sat on a throne in the centre and beside him sat the gods Odin (called Wotan by Adam) and Frey (called Fricco by Adam).

Thor was said to govern the air, thunder, lightning, winds, rain, good weather and harvests. Odin, which meant the furious, brought war and gave strength against enemies. Frey who gave peace and pleasure was represented by a statue with an immense phallos. Odin's statue was armed, and was likened to Mars and Thor was likened by Adam to Jupiter. The people also worshiped heroes who had been elevated to gods, such as king Erik about whom it is told in Vita Ansgari.

The tradition was that every ninth year, there was a great feast at the vernal equinox which was attended obligatorily by all Swedes. Not long ago, a Christian king named Anund (Anund Gårdske) had refused to sacrifice to the gods and had left gladly for his faith.

All the kings and the people brought gifts to Uppsala and even the Christians had to redeem themselves by attending, which Adam found to be distressing. There were feasts and sacrifices for nine days and each day they sacrificed a man and animals so that when the nine days had passed seventy-two men and animals had been sacrificed.

They offered nine male heads of every living thing that was used in sacrifices, even dogs and horses together with the men (the remaining were probably rams, cocks, pigs, goats and bulls) and the bodies hanged in the sacred grove adjoining the temple. Every tree in the grove was sacred due to the death and decomposition of the corpses.

A 72-year-old Christian had seen the corpses hanging arbitrarily from the branches and reported that the songs sung were many and improper. Adam considered it best not to be more specific about their content.

Swedish archaeologist Magnus Alkarp has pointed out that Adam of Bremen at one point uses the word "triclinio" to describe the temple - whitch my indicate that the "temple" in fact was a Hall-building rather than a temple. He also claims that Adams' description has its analogy in the Eddic poetry. All the elements in Adam's description – the golden chain, the grove, the idols, the well - appears word for word in descriptions of mythological sanctuaries in Grimnismal, Fjolsvinsmal, Voluspa and Gylfaginning. The same scholar has questioned the credibility of the christian descriptions of the practice of human sacrifice as a cultic act in Viking-age Scandinavia. 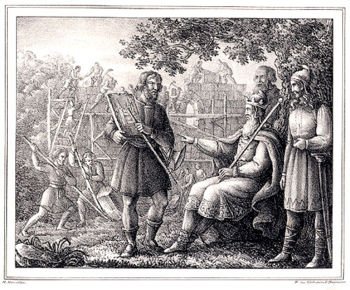 Image right: Freyr constructs the Temple at Uppsala, by Hugo Hamilton (1830)13th Century Icelandic historian and mythographer Snorri Sturluson tells of a temple that was built in Uppsala by the god Freyr:

Odin took up his residence at the Maelare lake (Mälaren), at the place now called Old Sigtun. There he erected a large temple, where there were sacrifices according to the customs of the Asaland people. He appropriated to himself the whole of that district, and called it Sigtun (by some suggested to be the same as Tacitus's Sitones). To the temple priests he gave also domains. Frey in Upsal, Heimdal in the Himinbergs, Thor in Thrudvang, Balder in Breidablik; to all of them he gave good estates.

Frey built a great temple at Upsal, made it his chief seat, and gave it all his taxes, his land, and goods. Then began the Upsal domains, which have remained ever since.

But after Frey was buried under a cairn at Upsala, many chiefs raised cairns, as commonly as stones, to the memory of their relatives. He also relates that there were human sacrifices in Uppsala, which may have taken place at the temple:

Uppsala for these sacrifices:

Onund's district-kings were at that time spread widely over Sweden, and Svipdag the Blind ruled over Tiundaland, in which Upsal is situated, and where all the Swedish Things are held. There also were held the mid-winter sacrifices, at which many kings attended. One year at midwinter there was a great assembly of people at Upsal, and King Yngvar had also come there with his sons. Alf, King Yngvar's son, and Ingjald, King Onund's son, were there -- both about six years old. They amused themselves with child's play, in which each should be leading on his army. According to Snorri, there was a main blót at the Temple at Uppsala in February, and they sacrificed for peace and for the victories of the king. Then the Thing of all Swedes was conducted and there was a grand fair. This continued even after Sweden had been Christianized. The Dísablót was performed to see how large the next harvest would be.

Like Uppsala:
Also Frey, the regent of the gods, took his abode not far from Upsala, where he exchanged for a ghastly and infamous sin-offering the old custom of prayer by sacrifice, which had been used by so many ages and generations. For he paid to the gods abominable offerings, by beginning to slaughter human victims. He also writes that there were assemblies of people entertaining themselves:

And when he (Starkad) had done many noteworthy deeds among them, he went into the land of the Swedes, where he lived at leisure for seven years' space with the sons of Frey (House of Yngling). At last he left them and betook himself to Hakon, the tyrant of Denmark, because when stationed at Upsala, at the time of the sacrifices, he was disgusted by the effeminate gestures and the clapping of the mimes on the stage, and by the unmanly clatter of the bells.'

According to the written sources, Olof Skötkonung, the first baptised king of Sweden (ca. 1008 AD) wanted to have it destroyed, but other sources indicates that the Temple at Uppsala was probably destroyed by king Ingold I in 1087 during the last battle between the pagans and the Christians. This is, however, not likely, since the conversion in this part of Sweden was completed in 1040-50. The exact events of the period c. 1050-1150 in Gamla Uppsala have never been satisfactorily understood, but there is clear evidence to suggest that the cathedral was by no means the first church to have been built on the site.