HAVE included in this chapter a number of stories of a similar character to those of Genesis, but which are not directly connected, and a fragment relating to the tower of Babel. The first and principal text is the story of Atarpi, or Atarpi-iiisi. This story is on a tablet in six columns, and there is only one copy. It is very mutilated, very little being preserved except Column III., and there are numerous repetitions throughout the text. The inscription has originally been a long one, probably extend ing to about 400 lines of writing, the text differs from the generality of these inscriptions, being very obscure and difficult. In consequence of this and other reasons, I only give an outline of most of the story.

We are first told of a quarrel between a mother and her daughter, and that the mother shuts the door of the house, and turns her daughter adrift. The doings of a man named Zamu have some connection with the affair; and at the close we are told of Atarpi, sometimes called Atarpi-nisi, or Atarpi the "man" who had his couch beside a river, and was pious to the gods, but took no notice of these things. Where the story next opens, the god Elu or Bel calls together an assembly of the gods his sons, and relates to them that he is angry at the sin of the world, stating also that he will bring down upon them disease, poison, and distress. This is followed by the statement that these things came to pass, and Atarpi then invoked the god Hea to remove these evils. Hea answers, and announces his resolve to destroy the people. After this the story reads :

This will serve to show the style of the tablet. The instrument of punishment was apparently a famine from want of rain, but there are some obscure words even in this passage.

Here the story is again lost, and where it recommences some one is making a speech, directing another person to cut something into portions, and place seven on each side, then to build brickwork round them. After this comes a single fragment, the connection of which with the former part is obscure.

At present no satisfactory story can be made out of the detached fragments of this tablet, but it evidently belongs to the mythical portion of Baby lonian history.

The next text is a single fragment, K 2407, be longing to a curious story of a wise man who puts a riddle to the gods.

After this there is a mutilated passage containing the names, titles, and actions of the gods who consider the riddle. It is evident that it is air or wind which the wise man means in his riddle, for this is everywhere, and in its sounds imitates the cries of animals.

Next we have another single fragment about a person named Sinuri, who uses a divining rod to ascertain the meaning of a dream.

There are some more obscure and broken lines, but no indication as to the story to which it belongs.

One of the most obscure incidents in the Book of Genesis is undoubtedly the building of the Tower of Babel. 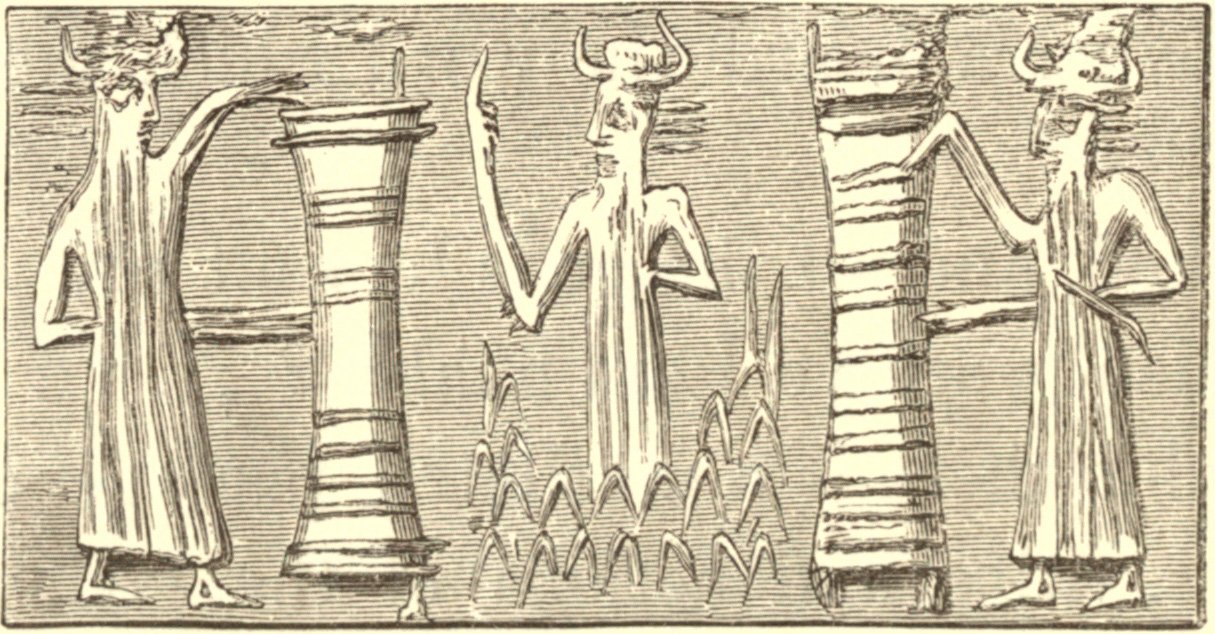 So far as we can judge from the fragments of his copyists, there was no reference to it in the work of Berosus, and early writers had to quote from writers of more than doubtful authority in order to confirm it.

There is also no representation on any of the Babylonian gems which can with any certainty be described as belonging to this story. I have, however, picked out three from a series of these carvings which I think may be distorted representations of the event. In these and some others of the same sort, figures have their hands on tall piles, as if erecting them; and there is a god always represented near, in much the same attitude. 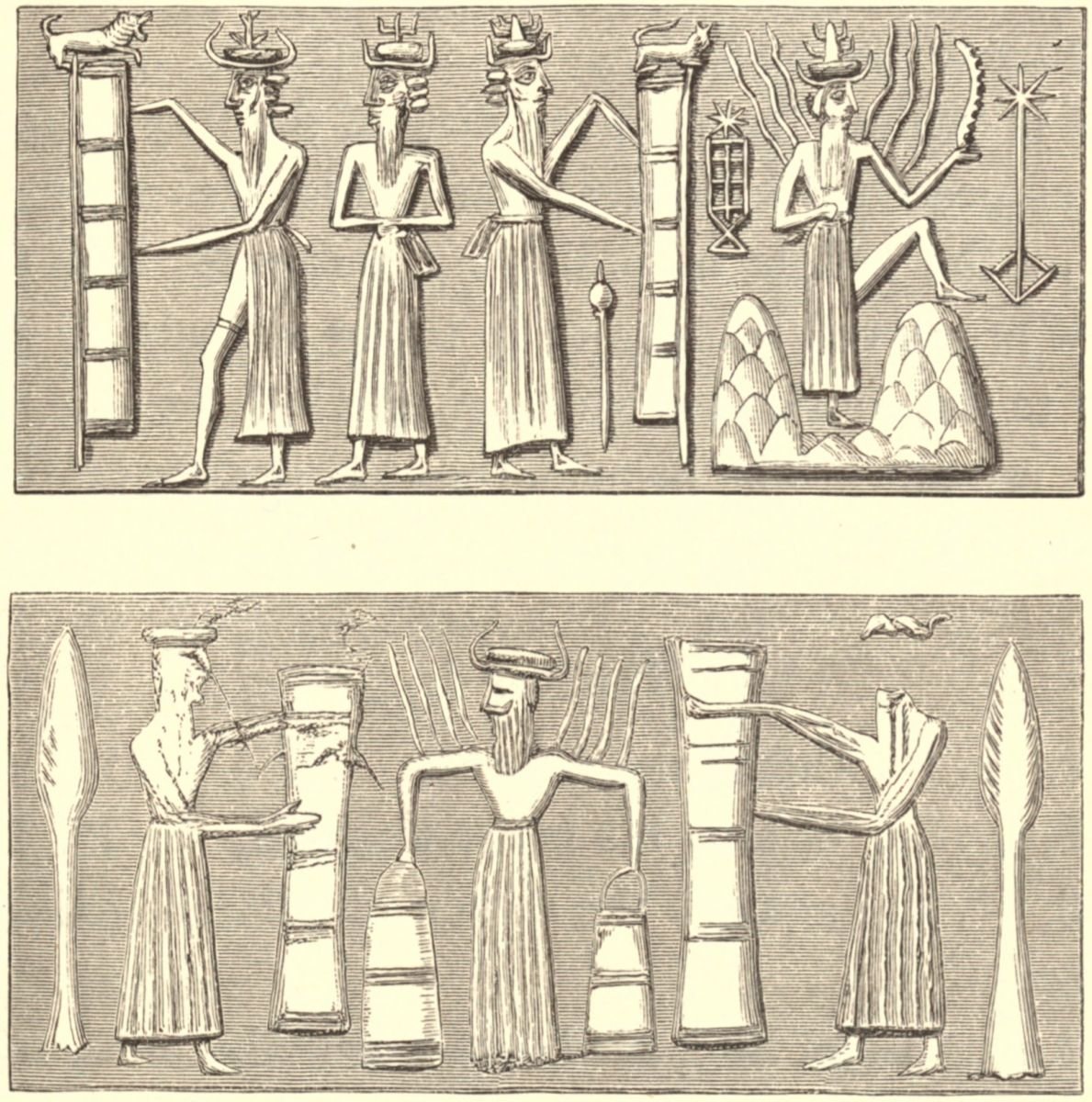 There is no proper proportion between the supposed structure and the men, and I would not urge more than a possible connection with the myth. The utter absence of any allusion to the tower, either in Berosus or the inscriptions, led me to doubt at one time if the story ever formed part of the Babylonian history.

Early this year I was astonished to find, on having one of the Assyrian fragments cleaned, that it contained a mutilated account of part of the story of the tower. I have since searched through the whole collection, but have been unable to find any more of this tablet, except two minute fragments which add nothing to the text.

It is evident from the wording of the fragment that it was preceded by at least one tablet, describing the sin of the people in building the tower. The fragment preserved belongs to a tablet containing from four to six columns of writing, of which fragments of four remain. The principal part is the beginning of Column I.

There is a small fragment of Column II., but the connection with Column I. is not apparent.

There is a third portion on the same tablet be longing to a column on the other side, either the third or the fifth. 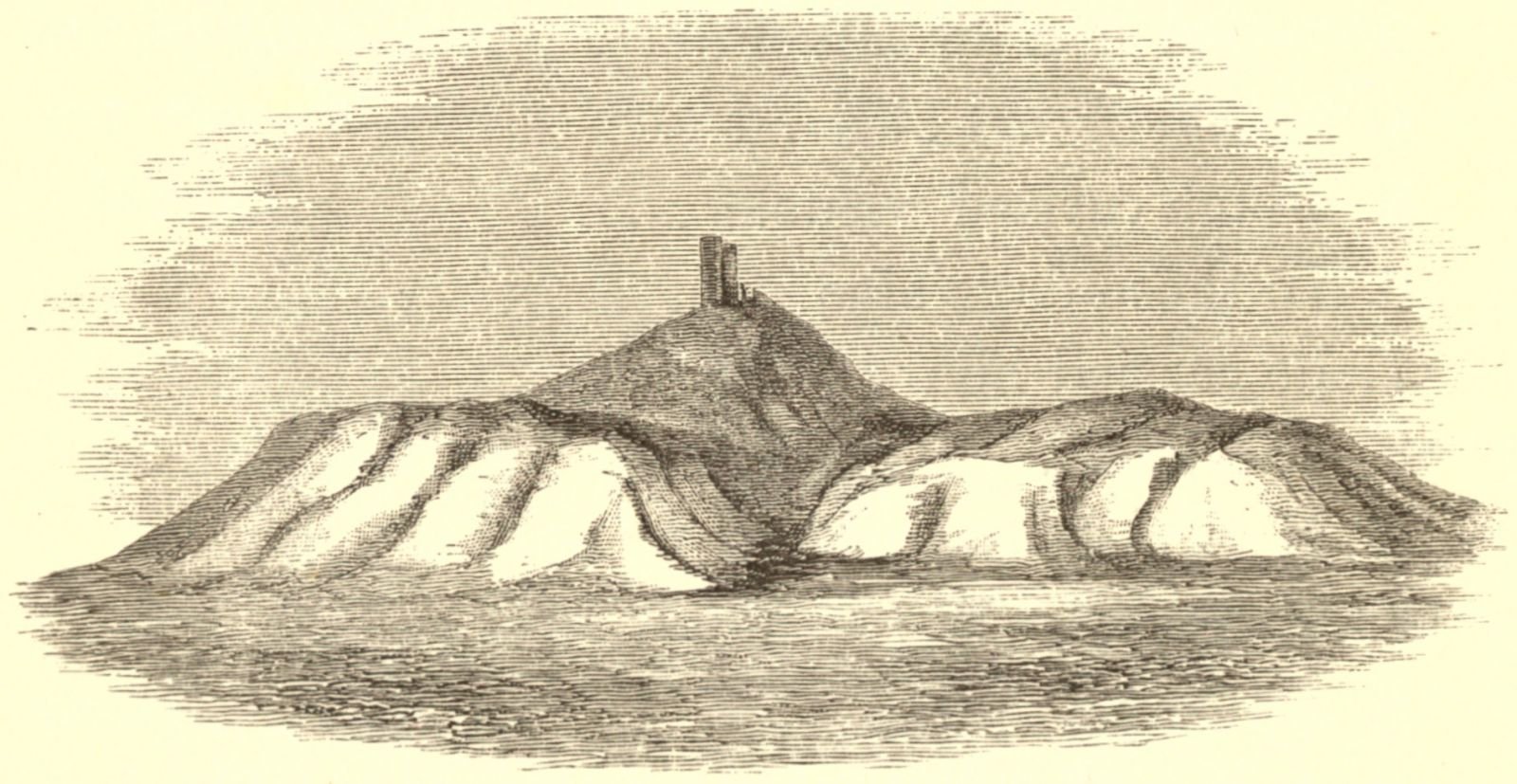 View of the Birs Nimrud, the supposed site of the Tower of Babel.

These fragments are so remarkable that it is most unfortunate we have not the remainder of the tablet.

In the first part we have the anger of the gods at the sin of the world, the place mentioned being Babylon. The building or work is called tazimat or tazimtu, a word meaning strong, and there is a curious relation, lines 9 to 11, that what they built in the day the god destroyed in the night.

The remainder- of the fragment and the two fragments of the other columns agree with the story as far as their mutilated condition allows. The fractured end of the 13th line of the third fragment has the beginning of a name Babi, which may be completed Babil or Babel, but I have not ventured on the restoration. In the case of the 6th and 8th lines of the first fragment I have translated the word "speech" with a prejudice; I have never seen the Assyrian word with this meaning.

View of the Babil Mound at Babylon, the site of the Temple of Bel

The whole account is at present so fragmentary that I think it better to make no detailed comparisons until more of the text is obtained. The various notices which have come down to us seem to me to point to the great pile of Birs Nimrud, near Babylon, as the site of the tower, this opinion is held by Sir Henry Rawlinson and most other authorities of weight. This ruin has been examined by Sir Henry Rawlinson; details of his operations here are given in "Jour. Asiatic Soc.," vol. xviii., and Rawlinson s " Ancient Monarchies," p. 544. 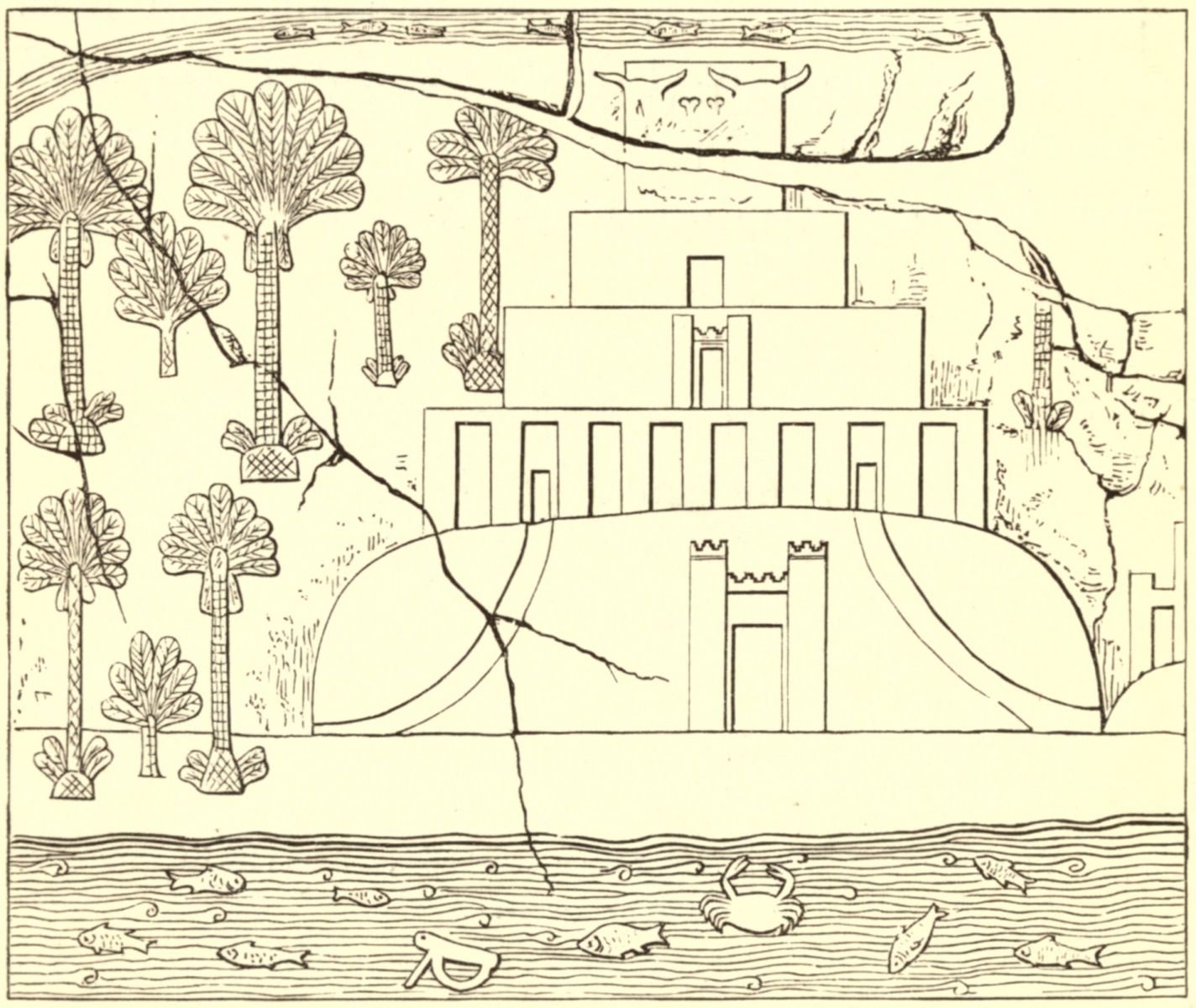 Tower in Stages, from an Assyrian Bas-Relief.

Sir Henry discovered by excavation that the tower consisted of seven stages of brickwork on an earthen platform, each stage being of a different colour. The temple was devoted to the seven planets; the height of the earthen platform was not ascertained, the first stage, which was an exact square, was 272 feet each way, and 26 feet high, the bricks blackened with bitumen; this stage is supposed to have been devoted to the planet Saturn. The second stage was a square of 230 feet, 26 feet high, faced with orange- coloured bricks; supposed to be devoted to Jupiter. The third stage, 188 feet square, and 26 feet high, faced with red bricks, was probably dedicated to Mars. The fourth stage, 146 feet square, and 15 feet high, was probably devoted to the Sun, and is supposed by Sir H. Rawlinson to have been originally plated with gold. The fifth stage is supposed to have been 104, the sixth 62, and the seventh 20 feet square, but the top was too ruinous to decide these measure ments. These stages were probably devoted to Yenus, Mercury, and the Moon. Each stage of the building was not set in the centre of the stage on which it rested, but was placed 30 feet from the front, and 12 feet from the back. The ruin at present rises 154 feet above the level of the plain, and is the most imposing pile in the whole country. The only other ruin which has any claim to represent the tower is the Babil mound within the enclosure of Babylon, which is the site of the Temple of Bel. I have given views of both ruins as the possible alternative sites.

In the Babylonian and Assyrian sculptures there are occasionally representations of towers similar in style to the supposed Tower of Babel; one of these is given on the stone of Merodach Baladan I., opposite p. 236 of " Assyrian Discoveries;" another occurs on the sculptures at Nineveh, representing the city of Babylon ; this tower is probably the Borsippa pile, which is supposed to represent the Tower of Babel. Birs Nimrucl now consists of seven stages, but the top stages were only built by Nebuchadnezzar ; before his time it probably presented the appearance shown in the Assyrian sculpture, and in the similar Babylonian representation figured opposite page 236 of "Assyrian Discoveries."