This study deals with the architecture of Assam (Northeastern India, Easter Himalayas), with special reference to Brahmaputra Valley. The Vernacular Architecture of Assam enjoys a variety of richness in tradition, made possible by the numerous communities and traditional cultures....

The Karbi or Arleng, erstwhile known as Mikir, is an important ethnic community of Assam. They are scattered in the districts of North Cachar, Kamrup, Nagaon, Sonitpur, and primarily in Karbi Anglong district of Assam. The Karbis racially belong to Mongoloid stock while their language belongs to Tibeto-Burman group. Like other Tibeto-Burman Language speaking groups, the original home of the Karbis was in the western China near Yang-Tee-Kiang and Howang-ho River or in South East Asia (Das:2003).

The Karbi people live in both the hills and plains of the region. The primary settlement unit in the both case is village but houses are scattered and thinly populated in the hills. There was the practice prevalent among the Karbis, to shift the entire village to another place for various reasons. Along with transitory nature of settlements, the Karbis had the system of community or collective living within one structure as mentioned by Waddell. The community living practice seems an ancient system that developed at the early state of human settlement. The Karbi people live in the traditional architecture of uniform design and style, though they may vary in size.

The Karbis are traditionally stilt dweller and the stilt house is known as hemtheng- chong or hem- tun. However, the Karbis living in the plains have adopted the ground variety of architecture, which is called hem- long- le / hempi or mandoo. They also construct two seasonal architectures known respectively as Mandoo and hem- taap, in the distantly locating cultivating land, to live temporarily to look after the cultivation. Constructed with bamboo and thatch, the Mandoo is constructed on ground while the hem- taap is a tree house, constructed high in the branches of a tree. A bamboo notched ladder is attached to climb the hem- taap. These houses are simple and temporary in construction and occasionally possess walls. Both these houses are single room architecture that possesses a hearth to cook.

The houses are traditionally constructed with locally available natural materials such as bamboo, wood, and thatch. Thus, the posts of a traditional Karbi house is made of wood or bamboo while the other members such as roof frame, walls, and platform are made of bamboo. The thatch roofed houses are usually mud plastered.

The Karbis check the supernatural favourability of a site before the construction of a house. This is done through geomancy, using cowry shell by a diviner. There is another system, known as hemkecham, wherein they plant a bamboo pole on an intended site, which remains for three days and nights. And they believe that if the site is not appropriate for construction, then the same will informed through dreams.

As mentioned earlier, the Karbi people are traditionally stilt dweller. However, there notice variations in the houses of different place. The stilt house, as seen in the Ulukunchi area of Karbi Anglong, is constructed few feet above the ground and is gable front. The house possesses a front porch known as xong, which is equivalent in size to the rooms of the house. This porch is enclosed with walls to a certain height and the upper portions of the walls remain open. At the front middle of the porch, a five or seven stepped ladder (don-don) with a bamboo handle (dondon- uchim- chim) for support is attached. This xong is used to receive the gusts. 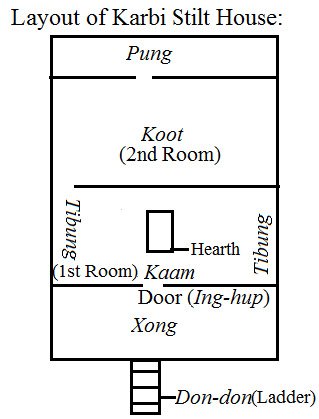 From the xong, a door (ing-hup), kept below the ridge, leads one to the inner portion of the house. The first room of the house is called kaam, which possesses the hearth (mehip) at the middle of the floor. The adjacent sides of the hearth are known as tibung. This room is used to receive and accommodate important guests. Then a partition wall (urpong) forms an inner room, known as the koot, which is used as sleeping area for the couple as well as the girls of the house. The house possesses another porch, called pung, to the rear side.

The construction technique of the house is similar to the stilt houses of other community. Thus, first they embed the three rows of main posts (niyok) of the house. After planting these posts, the floor of the house is constructed that rests on shorter posts (niyok), embedded in rows. After planting of the floor bearing posts, the beams of bamboo called urpun is placed above the posts. Then above the urpun, lengthwise bamboo called ujor is added. Above this member, bamboo split (klong) is attached to construct the floor which is not tied with split bamboo.

After completion of the floor, the upper structure of the house is constructed. Thus, after the completion of the floor, first they attach the purlins above the main three rows of posts. The middle purlin of the house is called urboong while other two are known as urphe. After attaching the purlins, the beams or post-plates (peng- dung) are attached. After this, the common rafters (jarbok) are placed above the purlin. The jarbok is a single bamboo, bent at the middle length, done through slicing away half of the bamboo. Then the jarbok is tied with lengthwise bamboos called boofesoo, attached from the below. Above the jarbok, bamboo splinter called gurloo is attached and which is then covered with thatch (philung).

However, the architecture as delineated by Das (2010) is little different from the above. He divides the architecture into three parts-the exterior, the interior and the rear side. Thus, the immediate area encountered after climbing the ladder where guests are received and the front open area in front of this is defined as the exterior. However, the ground in front of the house also contains certain elements such as a pigsty (phak- roi), an erected stone (longcho) to sharpen chopper, mur or the ground below the eaves, and the ladder or don- don. 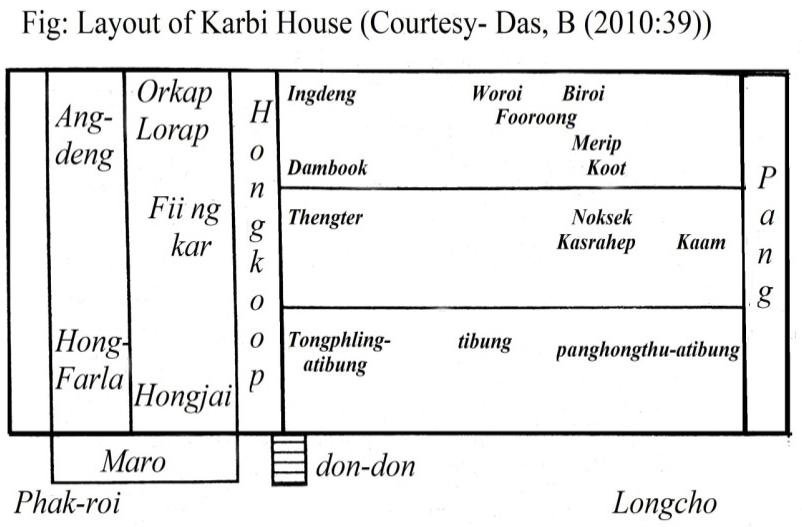 The area of the house used to receive the guests is called hong- pharla that possesses a hearth and a hanging shelf called rap. There are varieties of rap, namely rap- pi and rap- chho. The unroofed area of the platform in front of the hong- pharla is called hong- jai. After crossing the hong- jai, the small niche area in front of the residential apartment is called hong- koop that may also contain a hearth. Near the hong- koop, the area for storing firewood is called theng- roirai while another small parallel platform, called okrap / lorap, is constructed separately to keep dry fish and plantain leaf for worship.

The interior area of the house is partitioned to make the area called koot, which is the sleeping area for the main couple that contains the granary (hongkrong) also. The other area of the platform is symbolically divided into different parts of name and function. Thus, the area right to the partition is called ingdeng, which is the sleeping area of the married sons. The areas near to this are known as woroi and biroi, respectively used to keep fowls and goats while the front part of the ingdeng is called dambook. There establish a hearth near the ingdeng and area near the hearth is called Fooroong where the cats and dogs sleep. On the other hand, to the opposite of ingdeng, there remains the area of tongphling- atibung where female guests are received, tibung where the girls sleep and pang-hongthu- tibung where the old grandmother sleeps. Another hearth and shelf is established near this place. The open area in-between is called kaam, used to store different articles. The rear part of the house, outside the wall, is known as pang, used to pee. There may be another ladder attached to this part.

The Karbis use certain prescribed trees for the post (thaibong) of the platform. There use some diagonal prop (chakup) for firmness of posts. Above the posts, lengthwise bamboos called arpun are attached, above which breadth-wise bamboo called ajok are laid. The bamboos splinter laid over it are called klongpoon and klongden, above which flattened bamboo (klong) are laid to complete the platform.

After the completion of the floor, the roof bearing posts (nujok) of dengsira tree are embedded and purlins called arbung (ridge bearing) and jarbob are attached. Then, the common rafters called pengdang are attached. Above the purlins, the bamboo splinters are laid in lengthwise and breadth-wise direction, known respectively as wofaich and karol above which thatch are laid and tied using bamboo splinter (Das:2010).