Ayurveda, represented by Charaka and Sushruta, stands first among the sciences of Indian intellectual tradition. The Charaka-samhita, ascribed to the great celebrity Charaka, has got three strata. (1) The first stratum is the original work composed by Agnivesha, the foremost of the six disciples of Punarvasu Atreya. He accomplished the work by coll...

World Construction according to Classical Sāṃkhya 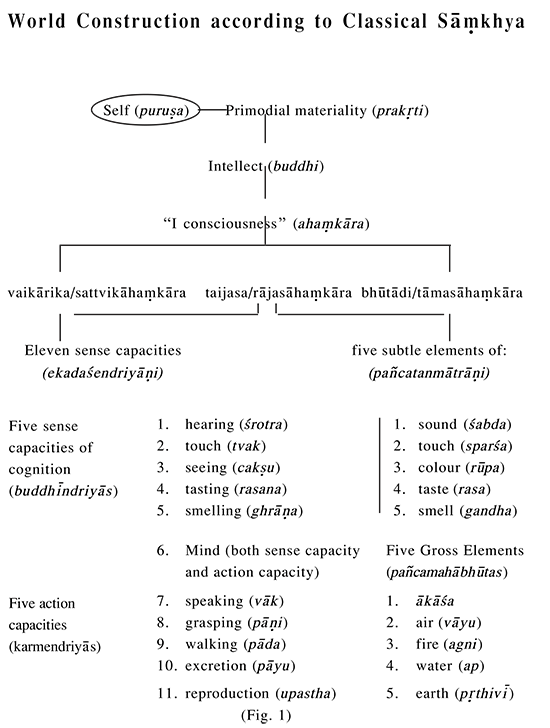 World Construction according to Carakasaṃhitā 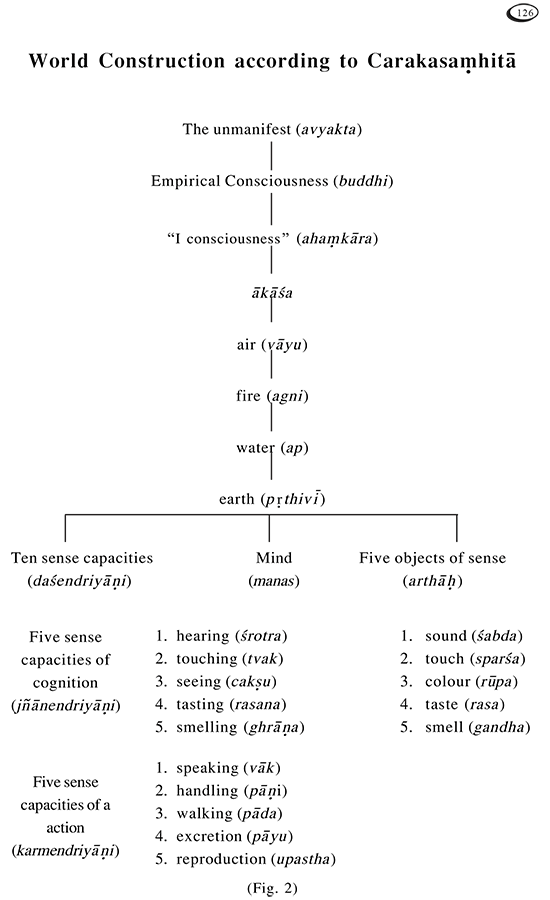 It may not be improper to recall the cosmological speculations found in Suśrutasaṃhitā in this context. There the cosmological speculation corresponds to the classical Sāṃkhya dualism.[1] In coherence with the classical Sāṃkhya, Suśruta draws certain clear identical characteristics and differentiating characteristics of the self (puruṣa) and primordial materiality (prakṛti). The identical characteristics are the following. Both the self and the primordial materiality are without a beginning (anādi) andwithout an end (ananta). They are non-mergent (aliṅga), eternal (nitya), without another one beyond (anapara), and allpervadig (sarvagata).[2] The differentiating characteristics are the following. Prakṛti is only one (eka), non-conscious (acetana), constituted by the three guṇas (triguṇī) that has the properties of seed (bījadharmi), productive (prasavadharmi), and afflicted by pleasure and pain (amadhyastha). On the contrary, puruṣa is numerous (ananta), conscious (cetana), beyond tripartite process (triguṇātīta), devoid of the properties of seed (abījadharmi), unproductive (aprasavadharmi), and unafflicted by pleasure and pain (madhyastha).[3] One notable difference that Suśruta makes with the classical Sāṃkhya is the conception of sense organs as physical.[4] However it stands as an anomaly in his theory since they are being conceived as direct evolutes of “I consciousness” in classical Sāṃkhya.

The first verse says that Agniveśa presented some of his doubts regarding the well-being before Punarvasu who was sitting with the Sāṃkhyas and Sāṃkhyātasāṃkhyās.[6] Here two terms namely, Sāṃkhya and Sāṃkhyātasāṃkhyā are seen consecutively used and they cause some sort of confusion. If the two epithets are used in the very same literal meaning then one of them being a repetition will become meaningless. So the first epithet is to be taken to refer to the early Sāṃkhya philosophers and the second one to mean the teachers of Āyurveda who were proficient in Sāṃkhya philosophy. The second verse says that the early Sāṃkhyas were conversant of the fact that the human-being is the constitution of six dhātus and that diseases are caused by the same six dhātus.[7] The third one suggests that the Sāṃkhya system is like the all illuminating Sun.[8] The last two couplets further make a significant remark about liberation. Reminding us of the Bhagavat Gīta verse[9] it is said that the Yogins promulgate discipline (yoga) and the Sāṃkhyas and the Sāṃkhyatādharmins disseminate discriminative knowledge as the way of liberation[10] and further asserts that one has to attain perfect knowledge and practice yoga to attain mokṣa.[11] An intimate observation of all these verses reveals that the Carakasaṃhitā presupposes the existence of Sāṃkhya thought (different from the Yoga philosophy) prior to Punarvasu Ātreya and after acquiring its perfect knowledge it was taught by Punarvasu to his disciples.

“The Marxist thinker Debiprasad Chattopadhyaya”[12] mentions Ātreyatantra as an ancient text in support of his thesis that the origin of Sāṃkhya philosophy goes back to the pre-Vedic Tantra.[13] The tāntric origin of Sāṃkhya may be an open question. Scholars like Erich Frauwallner consider that the Sāṃkhya in Caraka has only limited value because they represent opinions of outsiders or opponents of the system.[14] Dale Riepe opines that the earliest fairly lengthy account of Sāṃkhya is to be found in Caraka’s Ātreyatantra (78B.C.) and he places Caraka before Kapila and after Patañjali.[15] Nonetheless the chronological position is not tenable since Kapila is considered as the real propounder of the Sāṃkhya philosophy.

Dasgupta who makes a penetrating analysis of the origin and significance of the Sāṃkhya tradition suggests that Caraka and Pañcaśika[16] represent the earliest available exposition. Sāṃkhya propounded by Pañcaśikha (who is said to be the direct disciple of Āsuri) is found in Mahābhārat. It would be enough to say that both Caraka and Pañcaśikha accept twenty-four principles. He points out that puruṣa is the state of avyakta for both of them. Both Caraka and Pañcaśikha argue for the doctrine of the foundational Self because of the need for a basis of moral responsibility. They also asserts that suffering occurs because of the mistaken identity of the conglomerations of the physical body mind and cetana. Both of them refer to the final state of salvation as aliṅga.[17]

Another notable aspect of the Caraka-Sāṃkhya is that it shows considerable similarity with the Sāṃkhya speculation found in the twelfth canto of the Buddhacarita of Aśvaghoṣa where Arāda the former teacher of the Buddha is to offer it. Suffice to say that both Caraka and Aśvaghoṣa classify all the twenty-four entities into two groups. The first group comprises of avyakta, mahat, ahaṃkāra and the five gross elements under the name prakṛti and the second group consists of ten sense organs, the mind and the five objects of senses.[18] Similar to that of Caraka, the Buddhacarita also does not include the doctrine of guṇas in the classical sense. Avyakta is accepted as the ultimate ground of everything. The tanmātras are also not mentioned in the Buddhacarita. The plurality of puruṣa also is not accepted. Both of them speak of the field (kṣetra) and field knower (kṣetrajña).[19] With slight variations both of them enumerate and define the cause of miseries in the same way. Accordingly, delusion (moha), desire (iccha), hatred (dveṣa), and volition (karma) as the root cause of each and every action result in miseries by way of generating “I consciousness” (ahaṃkāra), attachment (saṅga), doubt (saṃśaya), vanity (abhisaṃplava), selfish dispositions(abhyavapādta), eroneous knowledge (vipratyaya) lack of discrimination (aviśeṣa) and adherence to rituals, priesthood, and begging. All these eight factors obstruct one to transcend his worldly existence.[20] Taking this into consideration, Larson states that all the three, that is, Caraka, Pañcaśikha and Aśvaghoṣa, are influenced by a common Sāṃkhya-yoga tradition.[21]

Anyway there can be no doubt that the Carakasāṃkhya represents one of the earliest available expositions of Sāṃkhya. What Caraka gives in his exposition is of natural cosmological-psychological character. Its centerpiece is the conception of the inner self as the field knower (kṣetrajña) and the psycho-somatic complex as the field (kṣetra) for the whole of therapeutics hinges on it.

The pre-classical Sāṃkhya can be seen in the middle and younger Upaniṣads, that is, Kaṭha, Śetāsvatara, Maitrāyaṇi, and the philosophical portions of the Mahābhārata like Bhagavat Gīta, Mokṣadharma which developed over a long period of time, JJL p. 27.

According to Vācaspatimiśra, Pañcaśikha is referred to in Vyāsa's Yoga-sūtra-bhāṣya (I.4, I.25, I.36, II.5, II.6, II.13, III.13 and III, 41) in Sāṃkhyapravacanabhāṣya (V.32, IV.68). Johnston has suggested that the Sāṃkhyayoga suggested in Buddhacarita XII can be ascribed to Pancaśikha amoung others., E. H. Johnston, Early Sāṃkhya, Price Publication Fund, Vol. XV. Royal Asiatic Society, London, 1937, p.152.