This study discusses the dynamics between the philosophy and practice in the Lakulisha-Pashupata order. According to the cave temples of Elephanta and Jogesvari (Jogeshwari), Lakulisa was the 28th incarnation of Shiva, and Pashupata Shaivism his doctrine, of which the Pasupatasutra represents the prominent text detailing various ritual practices (v...

A direct connection between Kapalikas and Nathas can be seen in famous old Bengali songs (carya gita) of Kanhapada (Kanu-pa), a Natha adept and also considered as a Mahasiddha by Buddhists. Kanha calls himself a Kapali in various verses and in this form (form of a Kapalin Yogi) he becomes the lover or husband of the Dombi (washer woman) who in symbolic terms is he goddess Nairatmya (goddess of Essencelessness, a Buddhist counterpart of Kula-Kundilini Sakti)

“Thou art the Dombi and I am the Kapali, for thee have I put on a garland of bones. The Dombi destroys the lake and eats up the lotus stalk I shall kill thee, Dombi, and take thy life”

Dasgupta[1] translates this at first go sinister sounding verse as:

“As the earthly Dombi should not be touched by the orthodox, so the divine Dombi is inaccessible to them. She lives outside the city (the world of senses). Unless she is killed (i.e controlled) she spoils the lake (the body) and eats the lotus stalk (the bodhicitta or mind of enlightenment)

“Of what nature is O Dombi,thy cleverness, the aristocrats are outside thee and the Kapalins are within. You are the Kama Candali-there is no woman more cunning and unfaithful than the Dombi”

The use of coded language (sandha bhasa) is evident in such songs and the need to understand them in a proper light of the spiritual practice is must before interpreting them. This is also a feature of Tantric visual art where the literal meaning can completely baffle and disgust the onlooker. In the third song Kanha clearly mentions that the yogin Kanha has become a Kapali; and has entered into the practice of yoga, and is sporting in the city of his body in a non-dual form.Esplaining the outer signs of a Kapalika he further adds68;

“His earrings (kundala) are the sun and the moon (Upaya and Prajna, equivalent to Siva and Sakti). The ashes he smears on his body are the ashes of passion (raga), aversion (dvesa) and error (moha). His pearl necklace is supreme salvation (parama mocha) and the song ends with his narrating how he killed his mother and other relatives in his house.

This highly symbolic description has been studied by scholars and decoded to mean that he cut his bonds with his senses (his relatives) and went beyond illusion to become one with the lord.

Yajnavalkya Smrti states that anyone who kills a Brahmin unintentionally has to take the Mahavrata vow for twelve years and atone for his sin. Apart from the usual injunctions of living a simple life and sustaining on alms, the text mentions that one must carry on his stick (danda) the skull of the person slain, like a flag. (Y.S ed by N.R Acarya, III)

This gory imagery reminds one of Khatvanga a weapon carried by various Tantrik deities, comprising of a skull attached to a danda. The imagery is closely related to the myth of Kapalamocana interestingly narrated with respect to various temples all over the country.

It is believed that after killing Brahma, Siva incurred Brahmhatya and the former’s head got attached to Siva’s hand. To get rid of this head Siva went to various religious places and when he reached the site (identified with various temples in North India but Kasi is considered most important) the head is broken into thousand pieces and Siva is freed from guilt.

“the ultimate aim of the Kapalika observance was a mystical identification or communion with Siva. Through their imitative repetition of Siva’s performance of the Mahavrata, the ascetics became ritually homologised with the god and partook of or were granted some of his divine attributes, especially the eight magical powers (siddhis).”

The phychological basis of such rituals has been explained by Eliade in detail and will be discussed in later chapter on rituals. Lorenzen stresses on the Eucharistic aspect of partaking “Panch Makara” (Five M’s) by a Kapalika aspirant.The Eucharistic significance of these ingredients (panch makaras) is explained in various Tantric sources.

“Wine (sura) is Shakti, the meat is Siva; the enjoyer of those is Bhairava himself. The bliss sprung from the union of those two is called Moksa. This bliss which is the form (rupa) of Brahman is established in the body of the worshipper. The wine makes it manifest”

“Wine (sura) is Tara herself in liquid form, who is the saviour of beings, the mother of enjoyment and liberation”

Importance of sacrifice and especially self-sacrifice is often hinted at in this tradition. This concept subsumes a wide range of activities from self immolation or suicide to self mutilation and from physical penances to simple exercises of mental discipline. One of the visual parallels to such an act of self sacrifice can be seen on a relief sculptural panel in Draupadi Ratha at Mahabalipuram. In this panel one can see a devi figure in the centre and a man sacrificing his own head to the devi can be seen from back. The theme is unmistakably that of self sacrifice. 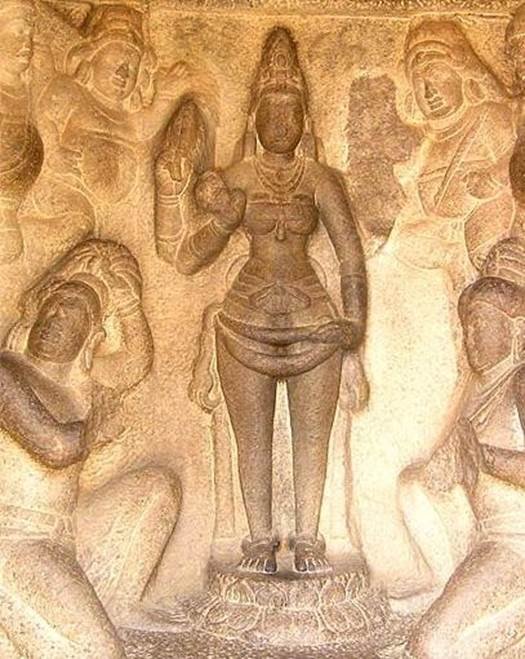