The Religion and Philosophy of Tevaram (Thevaram)

This page describes “thirunatuthogai, thiru idaiyatruthokai and urthogai (hymn 91)” from the part dealing with the Pilgrim’s progress (to the North), which represents the development of Arurar’s Mysticism as gleaned from his hymns. The 7th-century Thevaram (or Tevaram) contains devotional poems sung in praise of Shiva. These hymns form an important part of the Tamil tradition of Shaivism

In connection with the Temple cult, one may bring together for study here alone the three hymns, probably, though not belonging to this period, giving the names of the holy places, hymns which Cekkilar does not mention and which, therefore, we cannot in his scheme assign to any particular period of our poet’s life. As Idaiyatruthokai mentions Itaiyaru, it must have been composed and sung when the poet visited the places north of Kaviri. Urtto-kai and Thirunatuthogai mention Chikati and Vanappakai respectively as the poet’s daughters and, therefore, must have been composed in the period succeeding his marriage.

One of the hymns is Thirunatuthogai (H. 12), the hymn giving the Natus in which the respective holy places are situated. But this is not a correct label for the hymn as it does not mention all the respective Natus for all the holy places mentioned. The other hymn is Urthogai (H. 47)—a hymn giving the names of cities of holy places. The third is Idaiyatruthokai (H. 31)—the hymn giving the names of holy places, where, however, every verse ends with the words ‘Ur Eytaman Itaiyaru Itai Marute’—‘The city of the Lord is Itaimarutu in Eytaman Itaiyaru’. This must have been sung when the poet visited this holy place. Itaiyaru is the doab or the place between the two rivers and we have very many cities so named. This Itaiyaru is famous from the times of the Cankam age (Akananuru, S. 141, 1. 23 gives the name of this place, Itaiyaru), having been the favourite resort of the Colas. To distinguish it from other Itaiyarus (Inscriptions speak of one in Trichy District; 42 1913 mentions Itaiyaru in Rajasraya Vala-natu)—this has been called Eytaman Itaiyaru, whose significance or correct reading however is not clear—perhaps it is within the Oyman Natu. (The interpretation ‘Eytu A(m)man Itaiyaru’—‘Itaiyaru reached by the Lord’ is too artificial; for we find this phrase in every one of the verses suggesting that the whole phrase forms the names of the place). Inscriptions speak of the Temple here as Tirumarutan turai (146/1908). In keeping with this tradition, our poet speaks of the temple as Itaimarutu.

Mandalams are kingdoms or Rastrams—later on becoming Provinces of the Empires. Visaya was the greater political unit. Tondai Mandalam was divided into Kottams. Kottams probably mean the fortresses, the centres of all activities, which later on became the temples. We have Valanatus in the Cola country in the later Cola period w hich were units greater than the Natus or districts. Kottams were bigger units than the Notus. As the Natputtokai mentions Kurram in the place of Natu. these two may be taken as equivalents. Kurram literally means a division and this name for the division of a country is as old as the Cankam Works according to the commentaries (Purananurru vrai mentions Mutturrukkurram and Milalaikkurram in verse 24; Cintamani, S. 1143 mentions Kurram). But in this very hymn, one has Vennikkirrram and also Venni Natu, which are not synonymous and, therefore, are two different places. In the hymn Natuthogai our poet mixes up the Natu as Visaya such as Ila Natu (7), Cola Natu (7) with the Natu as District such as Marukal Natu (1), Kontal Natu (2).

In this enumeration of these holy places sometimes it is not clear whether we have to take the name as a proper name or merely as a description. In such doubtful cases we may mark it with an interrogation. 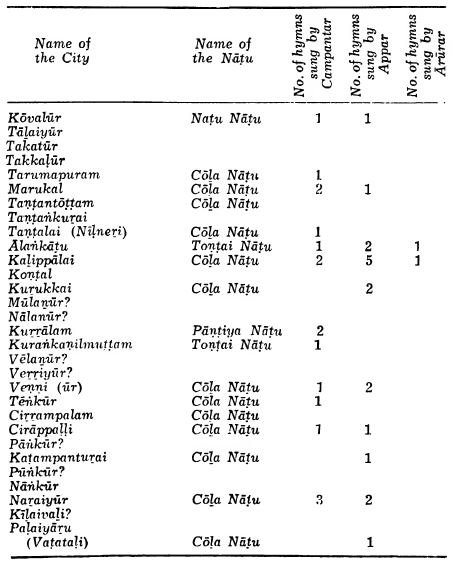 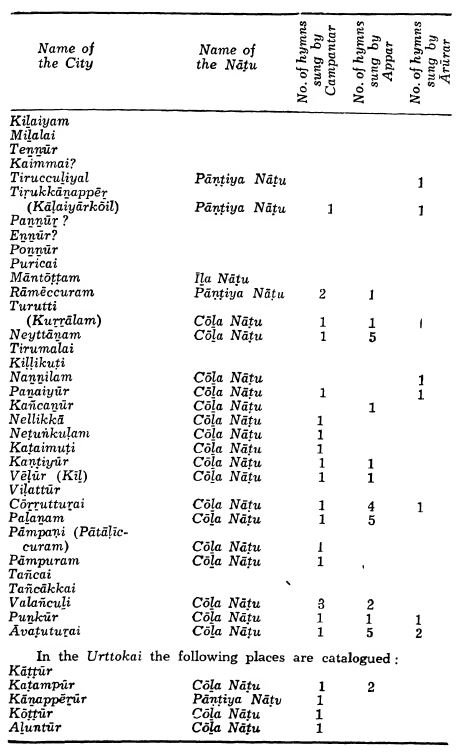 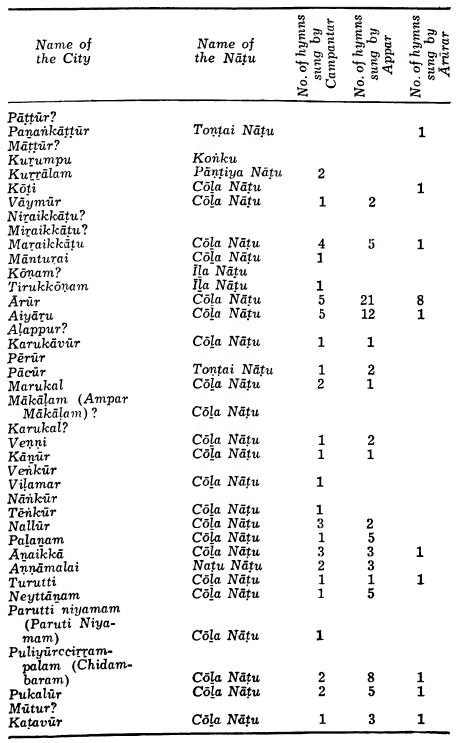 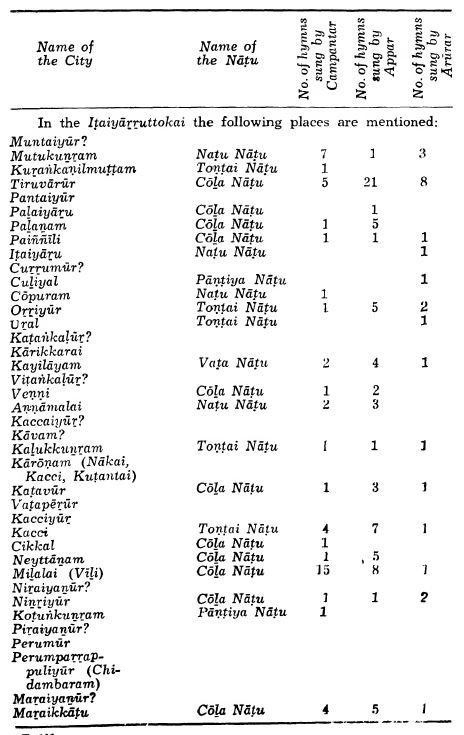 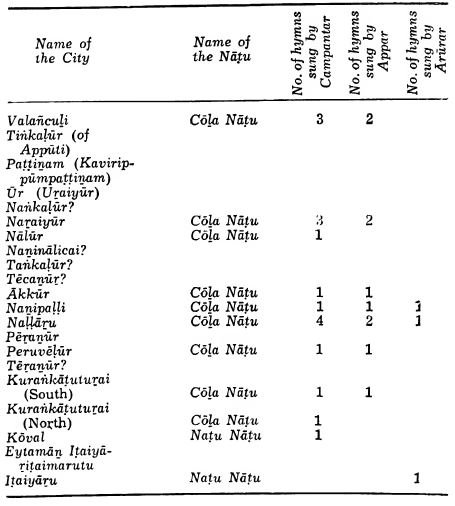 In the Urthogai the following places

In the Idaiyatruthokai the following places are mentioned:

In the Urthogai (H. 47) the poet follows a novel way of describing the Lord in relation to the holy places—the Ocean (of love) of Kattur (1), the Mountain of (good qualities) of Katampur (1), the Sprout of Kottur (1), the Sovereign of Aluntur (1), the Virtuous of Mdttur (1), the Bridegroom of Vaymur (2), the Lord father of Arur (4), the nectar of Aiyaru (4), the Lord father of Alappur (4), the Sheaf (of Grace) of Karukal (5), the Sugarcane of Venni (5), the Sugar candy of Kdnur (5), the Prince of Nallur (6), the Hara of Anaikka (7), the Flame of Turutti (8), the Wise of Pukalur (9). It is for further research whether these were the descriptions current in that age. As for Kattur, it is clear that it was so, for Nana Campantar has sung of the Lord there as ‘Narkoluntu’ and He is even now called ‘Kolunticar’.

In the Natuthogai (H. 12), the poet describes the cities as the places where resides the Lord. In the Idaiyatruthokai (H. 31), the emphasis is on Itaiyarru Itaimarutu as the city of the Lord though the other cities of the Lord are also mentioned as though by way of contrast.

Our poet’s prayers and his expression of his relationship with God are equally significant. “O, Lord of Kailas, coming and occupying my mind and continuously reforming it (47: 8), will you not show yourself for a while unto me, O, father of my father (47: 3)? Make me sing of you without ever forgetting you (47: 1)”. Apart from these personal requests, as usual, he rises to a universal level and prays in general for all the devotees: “Weed out all the miseries of your servants” (47: 2), “May you shower your Grace so that there may depart the terrible diseases and karma rushing on your servants who have taken refuge in you with all love” (47: 5, 6, 8). “May you order yourself to be drunk by your devotees” (47: 5). And our poet praises the devotees: “They are the people who alone leaving their guard over the flesh, love you and realise you”. (47: 7). In Thirunatuthogai, there is no such prayer but there our poet asserts that the Lord is the great light (12: 9), curing the old karmas as soon as one worships Him He also speaks of God as the great Beginning worshipped by His servants whose is the great order or command (12: II). In the Idaiyatruthokai he describes Otriyur as the city where the servants of the Lord flock together (31: 2). Ttruvakkur is described as belonging to Him who stands for the karmas to be erased out (31: 8). We have seen our poet laying great emphasis on Tamil and its great message, giving us a picture of the saints of the Tamd land. The poet calls this group, ‘Our group!’ In describing Itaiyaritaimarxitu. he speaks of it as ‘Tamilan enru pavikka valla enkal’ (fir) (31: 6), ‘(the city of) ours who contemplate on the Lord as the Tamilian.

In Urthogai the word, ‘Urai (47: 4, 5, 6) is very often repeated. The Lord enshrining Himself in so many cities is, therefore, spoken of as the Great One who lovingly wanders about in all the Natus (12: 11); He speaks of the Lord as the gem of all the Natus (12: 7). In the Urthogai our poet states that he contemplated on the idea of the Lord protecting various holy cities and has thus come to sing that hymn (47: 10). The devotees flock there as already stated (31: 2). This city of temple (Itai-yaritaimarutu) is the holy place where the people of clear vision get their mind clarified and are made of firm resolve (31: 10).

Our poet describes some of the holy places as briefly as possible. In Marukal, the plantains are said to ripen and the plantain is the holy plant of this place (12: 1). Kazhippalai is described as being surrounded by ‘kantal’ a variety of sword flower plant, “muntal’ a variety of thorny plant—plants which abound on the sea shore, an appropriate description of the city which lies on the sea shore near the back waters (12: 2).

Thiruppungur is described as the place where in the fields roll and jump the valai fish (12:10). Avatuturai is described as the place beautified by the gardens (12: 10). Ipaiyaritaimarutu is spoken of as being dashed against by the waters of Pennar (31:2). This makes it clear that this holy place must be on the banks of Pennar and not in any other place. Ndlur is described as "Nani nalicai Ndlur’ (31:6), as the place where resound the four kinds of musical instruments, skin, wind, strings and metal, thus in a way suggesting the explanation of the name Nalur. Or, it may be that Nani nalicai’ is another place. Karukavur is described as lying in a pastoral region surrounded by gardens with overhanging clouds (47: 4). Katavur also is said to be in a pastoral region full of sound (47: 9)—‘Kalicer puravin Katavur". In other places the descriptions are merely denoting the direction: ‘Panat-yur is described as the ‘Panaiyur” of the south—‘Ten Panaiyur’ and Kancanur of the North-Vatakancanur, (12: 8)—He speaks of one ‘Vata Perur’ (31:4).

The poet calls himself ‘Oran, Vanappakai appan and Vanron-tan’ (H. 12); “Vanrontan and Oran” (H. 31); ‘Cinkatitamman, Oran, Cataiyan Ciruvan and Atiyan” (H. 47). The poet says, ‘With a reverential fear “Nani” he composed that hymn, ‘Natuthogai’ (12:11). It is not clear what that fear was due to. In that verse, he speaks of the devotees worshipping Him and the fear was due perhaps to the incompleteness of his description and enumeration of the temples he has sung and to the enumeration of the holy places. As already stated, these hymns come in the best tradition of the Shaivite saints—of Aiyatikal Katavarkon, who has sung Ksettiravenpa, of Campantar who has sung Ksettirakkovai and of Appar who has sung Ksettirakkovaittiruttantakam and Ataivut-tiruttantakam. These hymns emphasise the cult of the temples where the Lord stands as an incarnation of beauty in the linga and in the images within these temples. These temples are to be looked upon as heavens on Earth. Those who sing of these temples are therefore, worshipping that way experiencing the highest state of bliss or Paraloka becoming devoid of all their karmas, happy in the thought of their certainty of His Grace. Therefore, our poet assures the readers of his hymns the same experiences. With reference to Natuthogai, he states that those who praise the Lord with the musical song composed by him will reach Para-Idka, the Supreme Sphere beyond everything else (Instead of ‘cervar ParalokanT we have ‘Cer Paralokam’—12:11—reminding us of Tiruvalluvar’s usage ‘Kalvarum kalvarum ner (813) where Sier’ stands for Siervar’—an example of the grammarian’s ‘kataik-kurai’). “Where will there be the karma of those who speak of ‘Itaiyaritainrarutu’ sung by Uran and he continues to assert, “Their own form and personality will become cool, calm and happy” (31:10). In Orttokai, he affirms that those who seated in a happy mood, open their beautiful mouths to recite this hymn of our poet, will be in Shivaloka (47:10).