This first volume of the Rasa-jala-nidhi includes preliminary information on Alchemy including initiation of a discpiple, laboratory setup, mercurial operations and commonly used technical terms. The Rasa-jala-nidhi (“the ocean of Iatrochemistry, or, chemical medicine) is a compendium of Sanskrit verses dealing with ancient Indian alchemy and chem... 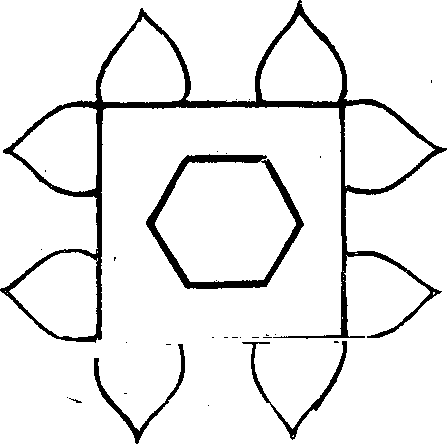 The next thing to be done, is to draw, with red vermilion, a hexagonal diagram, two cubits long on the Rasamandapa, by the side of which is to be drawn carefully a quadrangular and eight-petalled lotus furnished with four door-ways, (Fide figure given here).

In one of the eight petals should be placed an iron khalva. (boat-shaped mortar), mounted with gold, containing 100, 50 or 25 palas of mercury, which is to be worshipped like the Rasalingam. In six of the other petals of the lotus are to be placed diamonds, gems, mica, loadstone, borax and essence of earthworms, respectively, each of these potentialities being worshipped separately. Gandhaka (sulphur), Haritala (orpiment), Kasisa (green vitriol), silajatu (bitumen), kankustha, gems, rajabarta, gairika (red ochre)—these important uparasas (quasi-mercuries) are to be placed on the eighth petal, in the order of east to north-east, and worshipped in order of position. Rasaka (calamine), bimala, tapya (pyrites), chapala, tuttha (blue vitriol), anjana (stibnite), hingula (cinnabar), and sasyaka (a kind of vitriol)—all these uparasas are also to be placed at the edge of the eight petals and worshipped from the east to the north east. Gold and silver are to be placed on the eastern door, copper and lead on the southern door, tin and kanta iron on the western door, and Munda (common iron) and tiksna iron (steel), on the northern door, and all of these are to be worshipped by means of the Aghora and Rasankusa hymns.

Vida, Kanji, apparata, alkalis, mud, salts, furnace, crucible, bent tube, husk of paddy, char coal, cow-dung cakes, bellows, several tongs, stone mortars, iron mortars, equipments of goldsmiths, balances and weights, all sorts of vessels and pots made of, mud, wood, copper, iron, good medical ingredients,, colouring oils;—all these are to be worshipped outside the four doors of the lotus diagram, with the mantra referred to above. By the mantra given here (see text) the Bhairaba (Shiva) is also to be worshipped.

This concludes ‘Drawing of a hexagonal lotus diagram’ included in Bhudeb Mookerjee Rasa Jala Nidhi, vol 1: Initiation, Mercury and Laboratory. The text includes treatments, recipes and remedies and is categorised as Rasa Shastra: an important branch of Ayurveda that specialises in medicinal/ herbal chemistry, alchemy and mineralogy, for the purpose of prolonging and preserving life.